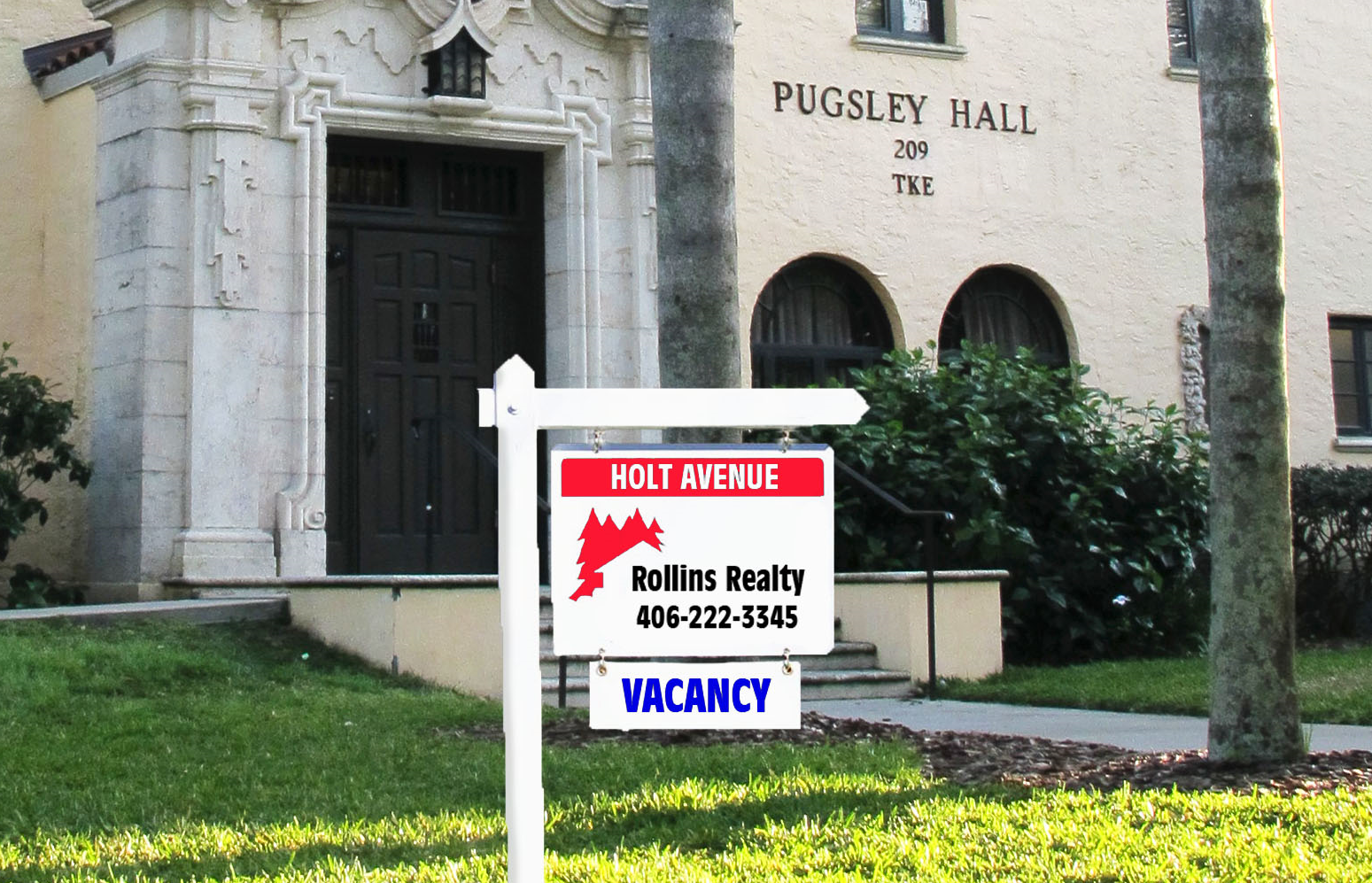 KICKED OUT: The status of TKE and KKG’s Housing Situation

Here’s the thing about small schools: word travels fast. And when word travels fast, rumors travel faster. So it was no surprise that when two prominent Greek organizations’ activities were suspended this spring semester, allegations and claims as to what exactly happened to put them in such a detrimental state spread rampantly. Recent announcements made about the two organizations’ housing arrangements rekindled the rumor mill.

Last week, both Tau Kappa Epsilon (TKE) fraternity and Kappa Kappa Gamma (KKG) sorority were notified that they would be officially losing their campus houses (Pugsley Hall and Rollins Hall respectively) for the upcoming academic year. Both Greek organizations are still recognized by Rollins and will continue to remain active during their absence from their respective houses.

TKE was put on summary suspension after being charged with violations of alcohol and recruitment policies. Summary suspension put a freeze to the fraternity’s ability to freely meet and hold chapter sessions. As an organization, TKE could not meet unless they registered the event prior with the school while all social and philanthropic activities were not allowed.

“Members are extremely saddened about the loss of our house,” said Pete McGoldrick ’13, Vice President of the Interfraternity Council and member of TKE. “It represents our brotherhood and it shows our social and active presence on campus.”

KKG found themselves in a similar situation when sanctions were also placed on the organization after allegations that the sorority wishes not to disclose at this time. Like TKE, KKG was unable to hold meetings without registering them with the school first and all traditional social events were off limits.

“I missed out on a lot of crucial parts this semester,” said Randi Alberry ’13, President of KKG ented that her’s and other senior’s experience at Rollins tarnished their time and contributions put into the sorority during their last semester. “We can’t make our Greek experience part of our Rollins experience anymore.”

Both organizations will reapply for housing on campus next year and are working to appeal the allegations that caused their sanctions in the first place.

TKE members have already begun taking active roles in campus and community organizations as part of their initiative to appeal their case. “We have an action plan as to how we’re approaching the school and how we’re going to improve our organization,” said McGoldrick. “We all want to build a better and stronger organization so we’re moving towards that, but we’re going to fight as hard as we can to get Pugsley back because Pugsley is TKE.”

Before receiving notification of their house expulsion, KKG also took steps to rectify their situation. Members reached out and put in effort to be a part of several campus organizations. However, their actions did not suffice. “It’s hard because we really tried,” said Alberry. Though the sorority will not hold a physical location on campus, the president is certain of the organization as they move forward. “We know we will continue to be a successful sorority.”

The prevalent theme between the two Greek organization’s housing dismissals is the overall perception that their cases were mishandled by Rollins offices and administrations. While the school has no official protocol in the handling of cases such as these, the vast majority of students in the organizations were confused and uninformed about why sanctions were made in the first place and what allegations were being made against them.

“We don’t know much about what’s been going on,” said Miller Bowron ’13, a member of KKG. “We’ve been kept in the dark by Rollins and national.” According to Bowron, the sorority found out they were in trouble a few days after this semester’s bid day and since then, constant secrecy has plagued the placement of their sanctions. “The decision [to take away the house] was unfair because no concrete examples were given for why we lost it. It’s not fair to the people putting so much time into the organization.” Miller also cited OSIL’s lack of communication with their faculty advisor as evidence that the organization was being kept in the dark and out of the loop.

Alberry echoes Bowron’s frustrations, citing the length of time it took the school to provide its reasons for house dismissal. “It’s taken all semester to get the allegations against KKG,” said Alberry. “It has been hard for the girls and it has taken a long time for us to get any answers.” As of April 1, Alberry was finally made aware of the allegations.

TKE members also recognized the school’s lack of transparency in the sanctioning process. According to McGoldrick, it took about 6 weeks until the fraternity was made aware of what violations were being cited for their sanctions.

Additionally, there is a prevalent attitude amongst the two Greek organizations that the crimes committed do not fit the punishment.
“None of the allegations happened at the house,” said Alberry.

“I appreciate that [the school] didn’t just kick out the fraternity,” said Aaron Tanyhill ’14, TKE member. “But I don’t think they realize how big of a deal the house is. They see it as a resource, not as an organization’s home.”

While Greeks are left confused about Rollins’ handling of the housing situation, the school itself shows mixed feelings towards Greek life.
“The school has misconceptions about what Greeks do,” said McGoldrick. “When one thing goes wrong they focus on that and forget all the good we do. It’s like the school is saying ‘we love when you hold all these events and support your philanthropies’ but when something happens, they don’t have our backs.”