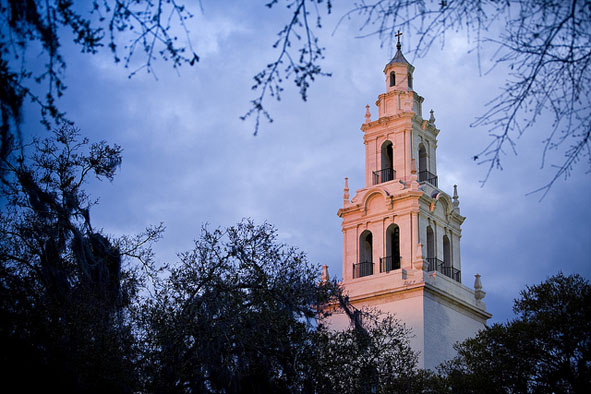 After Dean Powers’ retirement at the end of last semester, Senior Minister Shawn Garvey and Associate Minister Talia Raymond have been appointed Interim Deans of the Chapel. The two reverends are from the First Congregational Church of Winter Park, the founding church of Rollins College.

Originally this was expected to be a one-year arrangement; however, with the resignation of President Duncan and the subsequent presidential search party, the interim positions have been extended to two years.

Three of the goals that the new deans have for this year are to create a new and better interfaith area, to televise Vespers, and to have a sort of Question and Answer session with actors and musicians about spirituality.

“I am confident we are going to fulfill all of them,” said Reverend Garvey.

The new deans are trying to get classroom 101 in the back of Knowles Chapel taken off of the class schedule so that it can be used entirely as an interfaith space. Hopefully, the process will be completed by Christmas break, and Muslim prayer services have already begun in what will be the new interfaith area.

Since Vespers has a lot of student involvement, the new deans would like to start by streaming it and then try to get it on television like other colleges have done.

Reverend Garvey is hoping to get actor Sean Astin and others to participate in a sort of Question and Answer about spirituality. These talks would not necessarily be on religion, just on the person’s spiritual practices and how that influences their work.

Changes are also going to be made to the Sunday services at Knowles Chapel, which are led by Reverend Raymond.

“My goal is for students to be invested in what is happening in the chapel, and to have a voice in what the spiritual needs on campus are, to have those needs met,” said Raymond.

She is looking for student involvement to lead prayers, read scriptures, or pick songs. She would also like to link the Sunday services with other parts of Rollins College—potentially partnering with dancers, scientists, artists, or poets to create new components for the Sunday Worship.

“So that the gifts that students already have can be part of the spiritual life, and not separate,” Reverend Raymond explained.

One of the main goals for the Sunday service going forward is to give Christians on campus more of a sense of community.

“There’s newness happening, which I love. And people sort of jump on that newness and get excited about possibility. And that’s really fertile ground to create stuff that hasn’t been done before…I look forward to harnessing that and using it as a tool to really propel the spiritual life of the college, in whatever way it wants and tells me to direct it,” said Reverend Garvey.