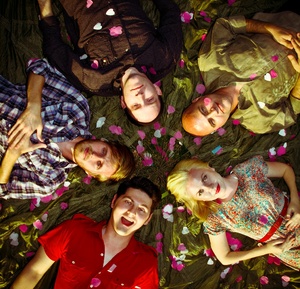 One student shares her experience after having attended the final show of Orlando band, Andy Matchett and The Minks, who claim their style meshes “indie and mainstream” sounds.

Last night, I saw a confetti cannon for the first time. On a chilly January evening in Central Florida, Andy Matchett and The Minks performed at the second annual Daily City Cardboard Art Festival. The festival ran all weekend with a variety of activities, but I’d say it’s a safe bet that Andy Matchett and The Minks were the highlight of the weekend. This local Orlando band put on a show that involved leaf blowers, confetti, a parachute, and kick-ass tunes. If you were ballsy enough, you could grab a leaf blower yourself to help keep the parachute and the confetti aloft.

Their music was as much fun as the confetti, and the venue, true to the festival’s name, had all the cardboard art one could possibly desire. This band calls their sound, “in between indie and mainstream,” and that’s accurate; they have the best of both worlds.*

The concert and fest took place at The Orange Studio off of Mills Avenue in Orlando’s Mills 50 district. Andy Matchett and the Minks played a show with the kind of set that’s over way too quickly, the kind of set that leaves you feeling like it just began. Sadly, it was the band’s last show, but if they were going to go out, they certainly left things on a high note.

The artwork featured for the Cardboard Art Festival was awe-inspiring. A massive cardboard puppet that stretched floor to ceiling, had fist pumping potential that would make Daft Punk green with envy. Also featured were cardboard suits made to look robotic, worn by a couple different people that danced around for pictures with concert-goers.

Good shots, cheap-ish beer, and a forgettable selection of wine made for an unforgettable evening. The Cardboard Art Festival was still going strong the morning after with volunteers wearing heroic-looking capes, riding around on bicycles, and picking up litter. I recognized one of the heroic litter picker-uppers as the friendly lady who took my $10 entry fee to the concert the night before. “Littering is a crime!” the cardboard enthusiast exclaimed. I quite agree; I hope they didn’t spend too much time picking up confetti and cardboard.

*Anonymous quote removed on 2.6.14 per Sandspur policy of not publishing anonymous material.