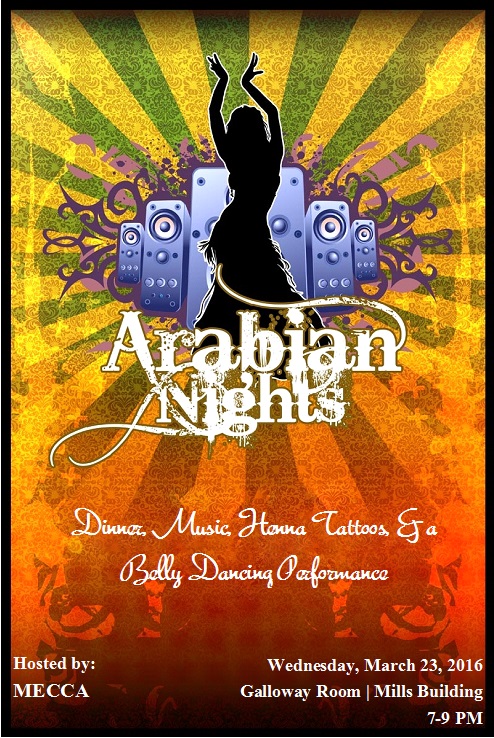 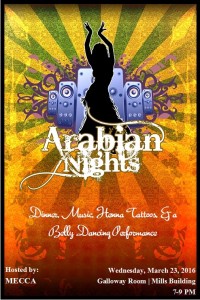 The Middle Eastern Culture and Cuisine Association, otherwise known as MECCA, hosted the Arabian Nights event last Wednesday, March 23 in the Galloway Room. With the promise of free food, henna tattoos, and belly dancers, students had incredible incentives to attend.

The turnout proved to be great for the organization. Nearly every table was filled by the time the evening got started.

Miniature dishes were served as components of the complimentary meal. Hummus, chicken, falafel, and baklava lined the table in the back of the room.

Every student and faculty member in attendance went back for thirds or fourths, all willpower to maintain diets defeated by the delicious dishes, while Arabian music played loudly in the background throughout the entire evening.

Around 8 p.m., several belly dancers came out to entertain the crowd.

The first pair swung around pink scarves that added a majestic feeling to their  stellar performance. Another woman was able to balance a sword on her stomach and head while dancing, maintaining both balance and a perfect form. There was also a dancer who was able to move so precisely it seemed as though she should have broken her neck; of course, her talent proved true, and she finished the performance flawlessly. In truth, every dancer proved to be gifted, though there were too many to review each of them individually.

After five groups of belly dancers had finished performing, the music was turned up and they began to move to the middle of the room, inviting diners to come and join them. Even novices  were able to learn a few belly dancing moves. Everyone was incorporated into the incredible show.

Henna tattoos commenced after the dancing and were offered throughout the rest of the event, while Arabian art and photography were positioned outside of the Galloway Room for passersby to observe. Although there was no speaking at the event, it proved to be a fun night to belly dance, get free food, and participate in a culture that may or may not have been your own.