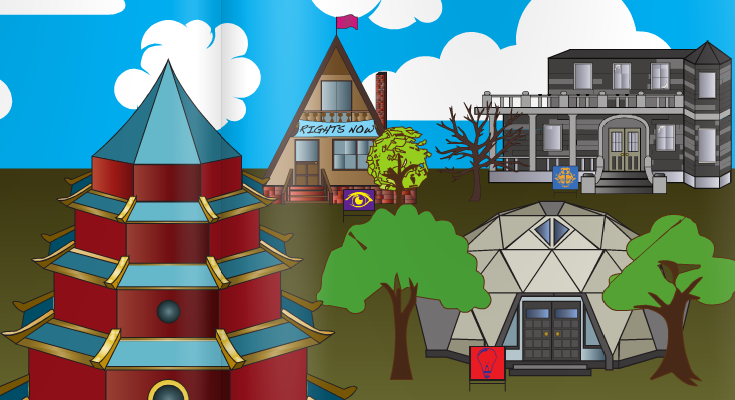 Novelty at Rollins: the neighborhood system

After many years of planning, the new General Education requirements are going into effect for the incoming first years.  The Rollins Foundations in the Liberal Arts, or rFLA, is designed around a system of Neighborhoods and Competencies, replacing the Alphabet Soup that Rollins has used for many years.

The new general education requirements are designed to allow students to better synthesize knowledge between classes, to keep students with others at their grade level, and to build off the success of the Rollins Conference Course program.

“This is a way to give students a new community, that they can transition into in January, and that will take them through their sophomore and into their junior year,” said Claire Strom, director of rFLA.

The rFLA system will require ten requirements: one RCC course taken the first semester, four competencies (including health and wellness, math, language, and writing), and five classes taken within one Neighborhood.

The four Neighborhoods are “When Cultures Collide,” “Mysteries and Marvels,” “Innovate, Create, and Elevate,” and “Identities: Mirrors and Windows.”  The topics allow for some interesting and quirky topics to be taught, such as superhero physics, including how Captain America’s shield flies, urbanization in comic books, and a class titled “Sex, Drugs, and Rock n’ Roll,” which discusses America in the sixties.

Almost thirty Neighborhood classes will be offered next semester to the first years, but they will not be open to upper classmen who are a part of the old system.  The Honors Program will also continue to operate outside the Neighborhoods, and most new transfer students will do the old general education requirements.

Strom says that there will be “a varied level of engagement, according to each student’s interests.” The program plans to offer Neighborhood themed housing to interested students in Holt Hall next fall, with a floor dedicated to each Neighborhood.

The Neighborhoods will act as communities, sponsoring events similar to the RCCs, such as parties or movie nights.

“Hopefully, it will create some of the cohesion we see with the RCC, but in a bigger sense,” Strom said.

Upperclassmen will not be affected by the change, but all first years will be deciding on their new Neighborhoods later this semester.  There will be an event to introduce them to the system, and they will be asked to choose their two favorite Neighborhoods.  They will then be assigned to one of their two choices.

Acting President Craig McAllaster supports Rollin’s change in curriculum, saying, “Our current Gen Eds have been around longer than anyone can remember.  And even though we’re a liberal arts school, we should every now and then renew and refresh what we do.  And I think this is long over due, but very well done.”

The neighborhood will explore these concepts with some interesting classes. “Food Democracy: What’s on Your Plate,” “Just Price to Market Price,” and “Medieval Pawn Stars: The Exciting Afterlives of Old Things” are some of the classes planned for the spring of 2015.  The classes will be taught by professors from many different departments at Rollins. “Our primary goal is to allow students to explore common issues from lots of different perspectives, so they can see how each approach to knowledge—the humanities, arts, social sciences, and sciences—offers a different perspective on the world. If we want to deal effectively with our increasingly complex world, we need to learn how to approach it with as many tools as possible,” said Dr. O’Sullivan.