One editor to rule them all 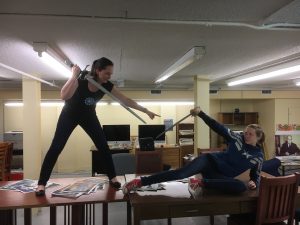 The Sandspur office was recently ravaged by swordfight between current editor-in-chief Lauren Waymire ’17 and production manager/former editor-in-chief Micah Bradley ‘17, who were engaged in a battle for supremacy over the paper.

Though the office normally has a relaxed atmosphere, the two Sandspur leaders have been passive-aggressively copyediting each other’s work for weeks. Tensions had been building throughout the semester, according to managing editor Alexandra Mariano ’17, a neutral party in the affair.

“I knew something was finally gonna go down when Micah talked first at the last staff meeting, totally dissing Lauren’s authority,” Mariano reported, still shaken from the event. “But I never thought it would end like this.”

According to witnesses, both Waymire and Bradley entered the office around 5:00 pm Monday, but while reading through the articles, tensions continued to mount as they disagreed on the font in which articles should be published. An extremely vocal advocate for Comic Sans, Bradley said, “It’s the best font, not only from an aesthetic perspective but also just because it’s fun.”

Though the font battle had been an ongoing struggle since the two had met, Bradley finally aggressed her successor after an argument over whether to play the soundtrack of Hamilton or Moana in the office. Waymire refused, arguing, “Hamilton is Lin-Manuel Miranda’s masterpiece! It’s an emotional journey and the only appropriate soundtrack to the work we do here!”

Ready to fight, the journalists grabbed their swords and tore through the fifth floor of the Mills building, thirsty for blood. Waymire gained the upper hand as she knocked Bradley’s sword away, but thanks to her wily spirit, she quickly regained her ground. Bradley took the office’s beloved mascot, the Sandsbear, hostage, demanding Waymire not only play Moana for the rest of the night, but also let her sit in the editor chair. Despite several attempts, the Sandsbear could not be reached for comment.

“Nuh-uh!” Waymire said, defending herself from another sharp blow with an old issue of The Sandspur.

After one heck of an awesome swordfight, Bradley and Waymire finally came to an agreement: they would play both soundtracks on shuffle out of their mutual love and respect for Lin-Manuel Miranda, and only this article would be printed in Comic Sans. They also agreed that President Cornwell probably likes beloved writer and overall chill person Sianna Boschetti ’18 best, because she’s just really cool and funny.

After a series of stuffing transfusions, the Sandsbear is recovering at a steady pace. The epic battle left many wondering who would clean up the shredded copies of The Sandspur abandoned on the office floor.

APRIL FOOLS! The Content on this page is meant to be read as satire and in no way reflects the opinions of The Sandspur, its staff or Rollins College.