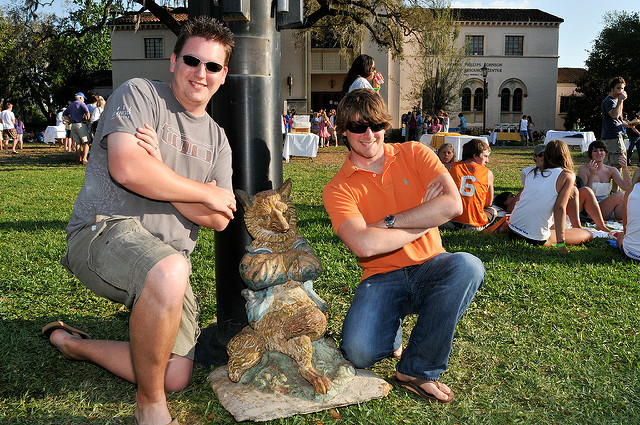 That’s right, the guy in your class who wears his Oakleys on his forehead and whose wardrobe is a never-ending cycle of Men’s Bid Day and charter-fishing company t-shirts totally knows when Fox Day will be; just trust him, he has a system.

“I mean, Grant did it really late the past few years, which means everyone is expecting it early, which means he’s definitely going to do it late again,” said That Guy (‘20) as he tried and failed to stealthily hit his Juul. It turned out the reason he never once participated in class discussion is because he was too busy ingratiating himself with President Cornwell so as to get the inside scoop on Fox Day.

“Plus I was at Krispy Kreme last night and one of the employees was complaining about an order for a thousand doughnuts they have to make for next week,” added That Guy, as your professor stared at the clock, debating the pros and cons of directing the class’ focus back to Antonio Gramsci’s theory of cultural hegemony, or just letting this fruitful and illuminating discussion of Fox Day flourish.

“Well, it’s definitely not going to be a Monday or a Friday,” chimed in a Freshman, as though they were making an insightful or original comment. “Or a Thursday, because that’s basically a Friday,” added That Guy.

Despite That Guy’s seeming confidence in his theory, the date he proposed has stirred some controversy among your other classmates. “There’s a baseball game AND and a women’s golf tournament on that day,” commented Some Girl. “Grant would never put it on that day.”

“It’s gotta be that day, or at least that week. There’s like some holiday the week after, so he can’t do it then,” That Guy retorted.

While the controversy rages on, all parties seem set in their convictions and are unwilling to entertain the notion that Fox Day is inherently impossible to predict.