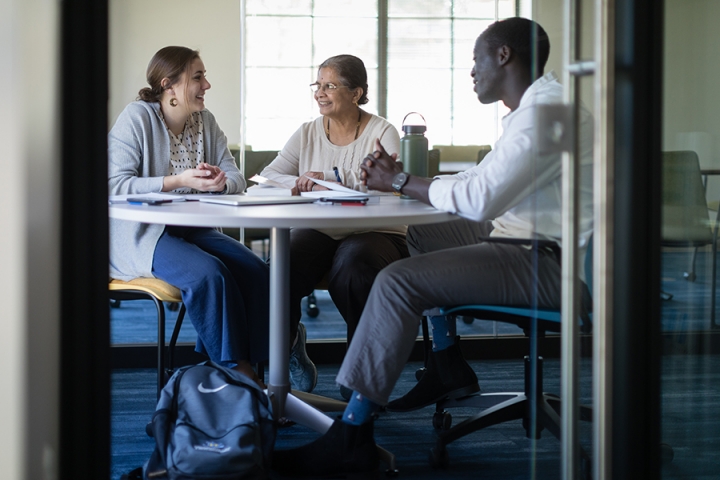 Opinion: Failure to support the Department of External and Competitive Scholarships reflects an imbalance in Rollins’ priorities

Rollins’ office of competitive scholarships changed students’ lives. Instead of being supported, it was gutted.

Every spring, Rollins lines its campus with yard signs that acknowledge student recipients of competitive national and international scholarships and fellowships. Rollins touts the winners’ faces on the front of their websites and magazines, hanging congratulatory banners inside buildings.

But I wouldn’t be surprised if this is the last year you see that.

Almost all of the students receiving these impressive accolades have been products of the Department of External and Competitive Scholarships, an office that has been essentially gutted by the college, and which, as of this month, has no full-time staff dedicated to its cause.

Dr. Jay Shivamoggi, the founder and visionary behind the office, left Rollins last month after 15 years. As The Sandspur reported, Shivamoggi, who is known and beloved by students as “Dr. Jay,” resigned after the college refused to increase the office’s budget.

Shivamoggi told The Sandspur that, over the years, she pleaded with the college for more funding and support, but it never happened. Then in 2019, the college eliminated the department’s assistant position. Despite Shivamoggi’s superwoman persona, the workload, which included helping about 80 students each year apply for the nation’s most coveted scholarships and fellowships, was nearly impossible for one employee to handle.

Rollins refused to adequately fund and support this critical office, yet it was still able to find millions of dollars to build a parking garage and luxury student housing. The number of swimming pools on the college campus is now three times greater than the number of full time-staff dedicated to helping students identify national scholarship opportunities. Something is wrong with this picture. Students will be the ones who suffer.

Working with this office was the single most formative experience during my Rollins career. Shivamoggi and her former assistant, Terumi Rafferty-Osaki, became mentors to me. They noticed students’ strengths and helped them understand how to process their backgrounds and talents to craft powerful personal statements and applications. They held mock interviews that could leave you in tears if you weren’t prepared. We were challenged and held to a higher standard than most; they taught me how to be persistent and dedicated with reaching my goals.

Working with Dr. Jay’s office was far and above all other Rollins programs when preparing me for adulthood. Her department changed students’ lives.

In a college where nearly 75 percent of faculty and staff are white, we cannot ignore the fact that the elimination of this office has thus pushed out two highly-talented and dedicated people of color. Shivamoggi is Indian, and her former assistant director, Rafferty-Osaki, is Japanese. Rollins must work harder to retain and support employees of color.

The office was also dedicated to helping students of color. When I attended weekly meetings, the group was consistently the most diverse of any others I was involved with on campus, and this was central to what made the office so special.

Shivamoggi and Rafferty-Osaki had built relationships with numerous diverse student groups, including the Black Student Union, Latin American and Caribbean Students, and Desi, for which Shivamoggi was the faculty advisor.

They built a pipeline for Rollins students of color to be selected for the PPIA Junior Summer Institute Fellowship Program, a rigorous academic preparation program for undergraduates pursuing public service careers, and helped low-income students secure scholarships for study abroad opportunities. I thought public service and studying abroad are central to Rollins’ mission.

The college eliminated Rafferty-Osaki’s position at the end of 2019, and he is now an assistant professor of history at Florida Gulf Coast University, and its founding director of Competitive Fellowships. In his first year at FGCU, 24 students won competitive external scholarships.

Why would Rollins push out employees with this sort of talent and dedication to student success?

Dr. Gabriel Barreneche, associate dean of advising, is now temporarily running the office, but he is leaving Rollins at the end of the year. A search committee, headed by Provost Susan Singer, who oversees this office, “will begin the process of hiring a new director for the department, and in the meantime, the department’s vision is being reevaluated,” The Sandspur reported.

After Rollins’ failure to support the office’s previous employees, I can’t imagine any top candidates will seek out the gig.

Plus, why is it being reevaluated? What, helping two students win back-to-back Truman Scholarships, with a third on the way, wasn’t good enough? What about being named a leading producer of Fulbright scholars nine times in 12 years?

What more did the office and its employees need to do to prove their worth?

While other colleges are investing in similar offices, Rollins has decided not to, despite reaping the rewards of its past success. The data shows that when colleges invest more in staffing this office, more students win scholarships. Rollins should be bankrolling initiatives that invest in students’ futures, instead of pricey buildings and pools.

I am sad for future students who will know Rollins without Dr. Jay and without the life-changing opportunities this office could have brought them. Higher-ups at Rollins, particularly the Office of the Provost, should deeply reflect on their priorities and how they gravely failed to retain two people of color.

I hope that the college changes course and adequately staffs and funds this office. Employees like Shivamoggi are rare, but with the proper support for the Department of External and Competitive Scholarships, Rollins might just get lucky and find another gem to help students secure life-changing opportunities.

Ellie Rushing graduated from Rollins in 2019. She was the editor-in-chief of The Sandspur and is now a staff reporter at The Philadelphia Inquirer.