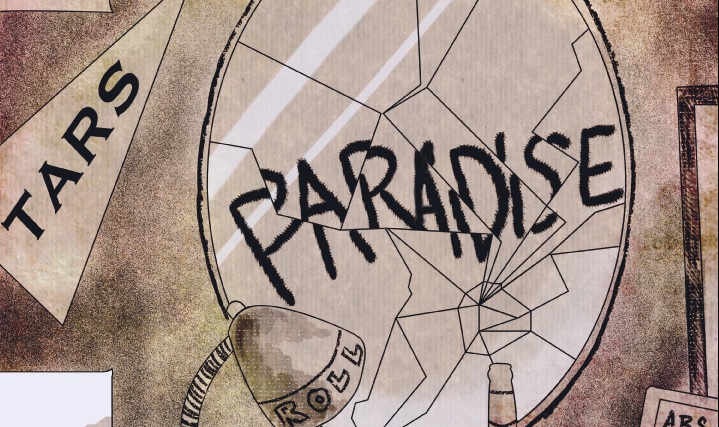 1. This, you sometimes have to remind yourself—this is paradise. Rollins is. The live oaks, older than you’ll ever know and knowing more than you’ll ever live to see. The hanging moss draped languidly from their branches. The lake—wide, warm, still. Its water: tobacco-spit brown, opaque and inscrutable. The tile-roofed buildings nestling its banks, seemingly in affection rather than by design. And the manicured lawns so green they startle, and the kids playing Frisbee on them, and the way their hoarse laughter cuts through the syruped air like a bracing tonic. And the pizzeria on a side street just off campus: go there, and watch a javelin-thin blonde girl—imperiously sunglassed, dressed to inspire panicked trips to bathroom mirrors at which you scornfully prod at your face, bat the wrinkles from your shirt—go, and watch this girl eat three slices of extra-meat pizza. In one sitting. Marvel at the avian efficiency of her movements when she goes to dab the grease from the corners of her downturned mouth. And remind yourself: this is paradise. Because sometimes—oftentimes—you’ll have to. Long enough here will make you feel misshapen and ill-equipped. Ill-equipped for what you’ll never know; all you’ll know is the unshakable suspicion that you’re vaguely deficient has been dogging you for weeks, now. This is the price you pay for living in perfection: your own imperfections, cast in sharp, pitiless relief. It’s a price easier paid by some than others. I’ve seen unflappably healthy-minded kids enter Rollins and graduate four years later, just as they came: unflappably healthy-minded. I, though—I just couldn’t afford it. There was a medical leave my sophomore year, (depression,) then a suspension my senior year; then I was gone. Paradise was killing me. But that didn’t keep me from coming back. And, since my return, I’ve learned something: the price of returning to paradise isn’t the same as the price of staying there. Not for me. No—it’s costlier.

…I’m writing this from an IHOP close enough to Orange County Jail for a person to see tight coils of concertina wire, looking like some ghastly orthodontic fever-dream, from the window of this booth. As I do right now. I posted bail half an hour ago.

2. I know: I expected these dispatches from suspension to get progressively less dire, too. But as I’ve written here before, the best addiction stories traffic in hope, and this story—the third of my dispatches and the final one, also my final piece for The Sandspur—does just that. Just wait.

The crude, sweet smell of someone else’s vomit lingered in the air. It’s the mirror I’m thinking of now, though. It’s looking into that mirror and saying aloud, I don’t want to do this anymore.

3. I read once that a man in freefall has no sense of his own weight—so, then, no sense he’s falling at all. In fact, were all context of his fall removed, the man would have no idea what was happening. No idea just how fast he was plummeting toward earth, no idea just how hard the impact would be when he finally got there. He might even think himself weightless, in strange, suspended animation. He might think he was floating.

…It was my mother’s idea I apply for a job at Wendy’s. It seemed to her the kind of mindless work I needed to restore structure to my life. It also seemed to her a 22 year-old should be able to hold down a job for more than two weeks at a time, something I’d failed, time and time again, to accomplish. There was an ill-fated stint as a busboy, as a butcher, and as an employee of Columbus, Ohio’s premier pet resort and spa. The only thing my various odd jobs had in common is how they ended: with my termination. Wendy’s would be different, though: “Honestly, Ben,” my mother said. “How could you screw up flipping burgers? It’s perfect.” “I could forget to flip the burgers and let them burn until I’m faced with a griddle of charcoal briquettes.”“Be serious.” “I could seduce Wendy and leave her scorned. She could get me fired.” I lowered my voice to a stage whisper. “She’s the boss’ daughter.” “You’re interviewing there,” she said.“Yes, ma’am.” Behind my flippancy there was a mental impediment, the shape of which I couldn’t quite discern, that had been preventing me from seeking employment since my return from rehab months earlier. A nebulous reticence, the source of which I hadn’t given much thought. All the same, I decided it would be easier to head to my local Wendy’s franchise and sit down with a shift manager than it would be to endure Mom’s hectoring about my failure to do so. The shift manager’s name was Andy—redheaded, with a face both freckled and acne-scarred. A good three years younger than I was, too. Before he could glance over my application, I pointed to a sign behind him. ‘YOU,’ it read, ‘DESERVE REAL FOOD.’

“Not exactly; no. We’ve been using it in select test markets for six months now.”

I nodded pensively. Then: “I don’t understand. Why do I deserve real food? What is it, exactly, I’ve done?”

“Well, that’s not exactly how it’s meant to—”

“Come to think of it, doesn’t everyone deserve real food?”

“That’s more the direction they were going with that, I think.” Andy looked down at the papers in front of him and took a deep breath, preparing to launch into the interview. But there was no stopping me. I was on a roll.

“OK, yes, but the word ‘deserve’ denotes merit. That I’ve done something to earn real food my peers haven’t done. So then if everyone deserves something, doesn’t that mean nobody deserves it?

“It doesn’t make any sense, Andy,” I said. “And I don’t like its ramifications. At all. Either it’s sloppy usage or, if you’d so kindly tell me, just whom exactly doesn’t Wendy’s feel deserves real food?”

“Well,” Andy said. “Huh.” I was right. And I was clearly unhirable.

…The stasis I experienced during those few months after rehab was maddening. Every day, I told my mother I felt stuck, felt my life was on hold, felt no progress was being made. And yet I’d just sabotaged an opportunity for real progress, tangible and honest. I’d denied myself a small victory just when I needed one most. I felt I was floating. And I decided the remedy—the thing to set my life back in motion—was a trip down to Florida to visit my friends. I left Columbus for Winter Park on August 20th.

4. There’s little for an addict to write about relapse. It’s simply the resumption of a behavior which, to him, feels the most natural in the world. My return to drug use was no different. I hadn’t been in Florida three hours before I was using again. Though, to be sure, it was a conscious decision, it didn’t feel like one. It felt seamless. A non-event. Like putting on a sweater you haven’t worn all summer on that first brisk fall day. I was back on drugs. And then, some days later, I was on drugs and driving a friend’s car, going to pick up some coffee at Dunkin’ Donuts; and I didn’t make it there.

5. I don’t remember the accident. All I know about it has been told to me. I’ve been told I was going 45 mph down a side street when I crashed into a cream pink, 1955 Cadillac Coupe Deville, parked along the curb. I’ve been told the Cadillac was for sale; and when its owner heard the crash and came outside to investigate, he said, “Well, looks like we’ve got a buyer.” I’ve been told both cars—his, and my friend’s Jeep, which I was borrowing—were totaled. I’ve been told, had I hit the Cadillac at a slightly more oblique angle, I’d be dead. I’ve been told to consider it a miracle I wasn’t hurt in the least, and that no one else was. I’ve been told police then arrived on the scene shortly thereafter. And then they arrested me for driving under the influence.

…Jail I can recall more clearly—the whole place a world of poured concrete and sallow skin, Klieg-lit 24 hours a day. There were no windows. There were no clocks. That’s all incarceration is: a sense of abject disorientation, of dislocation, that never, ever abates. Clearest to me is the cell in which I was placed: a nine-by-eight foot room with an army cot and a lidless toilet, the upper half of which doubled as a sink and drinking fountain. No windows there, either, but a rudimentary mirror of scrubbed, stainless steel. The crude, sweet smell of someone else’s vomit lingered in the air.

It’s the mirror I’m thinking of now, though. It’s looking into that mirror and saying aloud, to no one in particular, I don’t want to do this anymore. I don’t want to be this. And then it’s the memory of another late August day, fifteen years earlier, clear, with autumn’s promise in the air but its presence not quite felt. It’s the memory of another smell—not vomit, but the sharp, cedary scent of sharp, cedary pencils. It’s the first day of school and I am young and I know this year, this year will be different. I will be a better student. I will get only good grades, will ingratiate myself to my teachers just enough to earn their favor, but not enough to earn my peers’ derision. It’s the memory of the pure, clear hope I felt that day—the hope felt in anticipation of multiple and sundry improvements, all sure soon to come. Of progress. And then the slow realization that this day, in this cell, is no different. I am able to start over any day I choose. I am able to be better, kinder, more present—am able, at any time, regardless of circumstance. It’s deep gratitude for this freedom. It’s pure, clear hope again. It’s knowing, as long as I have this freedom, as long as I can choose to be better than before, as long as I live, I can plant my feet anywhere and breathe in the air and say to myself, This—this is paradise.