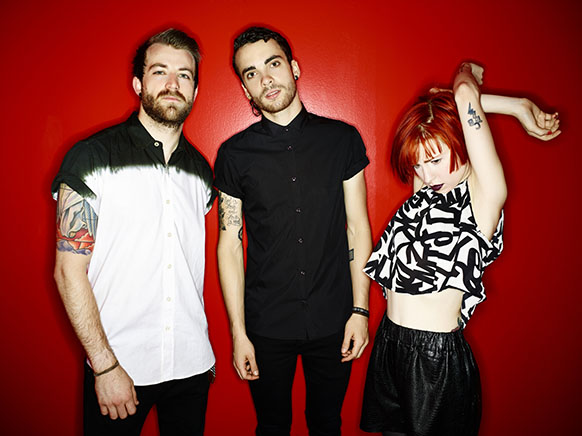 The band Paramore formed in 2004 and released their first album in 2005.  Since then, they have gained a tremendous fan following, along with the release of three additional albums.  Before the release of their last album, two of the band members left.  The two were brothers, guitarists, and founding members of the band.  Many fans doubted whether the band would survive their departure.  However, with their latest self-titled tour and album, Paramore has definitely proved that they are here to stay.

Last week on Nov. 5th, Paramore’s “The Self-Titled Tour” made a stop in Orlando.  The concert was held at a nearly-filled UCF arena.  The stage was shaped similar to a crown, with three triangles extending the stage and pointing towards the audience. The different band members played or sang from different places on the stage, so it was difficult to have a bad seat.  A large screen hung behind the band members.  It mostly displayed different colors or flashing lights, but would occasionally show intentionally grainy video footage of Haley Williams singing or of audience members.

Hayley Williams was easily the center of everyone’s attention for the entirety of the concert. Though only 24, she has incredible stage presence and energy.  The concert lasted about two hours, and she did not stop moving the entire time.  She was constantly dancing, jumping, or literally running around the stage, not to mention that she sang every song.  The only time she stopped moving was when she played a keyboard for a few songs.

Even though they are the band’s original songs, Hayley Williams put a live spin on Paramore’s songs.  She would often change keys, speak, or shout lyrics to songs.  She always sounded impeccable, though, and her unpredictability made the concert even more entertaining.

The actual set list contained many songs from both new and old albums.  The band played most of their hits, but they also played several of their lesser known songs.  Some of the songs they played included “Part II,” “Fast in My Car,” and “Ignorance.” Hayley Williams invited the entire audience to stand up and dance with her as she danced and sang “crushcrushcrush.”  An audience member was even invited on stage to help sing one of the band’s most popular early singles, “Misery Business.” The band closed with balloons dropping from the ceiling and singing their newest hit “Still into You.” Paramore’s latest concert tour proves that they are still a successful and talented band–mostly due to the musical talent of Hayley Williams.