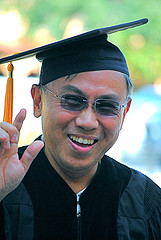 What do ping pong, Mozart, and rebellion all have in common?

The answer is Rollins College’s own Professor Li Wei. As a freshman, I am lucky enough to have wound up in Mr. Wei’s RCC class “How Ancient Chinese Thought Can Teach Us in Modern American Life.” Soft-spoken with a contagious laugh, you probably would not imagine Wei leading an extraordinary life. In fact, he refers to himself as “just an ordinary guy.”

His past, however, tells a different story. Professor Wei was born in Shanghai, China, while the city was still largely underdeveloped and many families struggled to get by.

“We lived,” he said. “We were poor, but still very content.” Wei loved to learn and dedicated long hours to studying—and ping pong.

“It’s a very popular sport in China,” he continued. “Actually, [President Duncan] was a very good competitive player. He beat everyone, including myself.”
Wei’s life changed dramatically, however, with the onset of China’s Cultural Revolution.

“Ten years were wasted. It began in 1966. I was thirteen. I should have been in school, but the schools were closed by Mao Zedong, the Chairman of the Communist Party of China. There was a huge power struggle at this time—internal powers competed for different ideologies. The people were only concerned with having a good leader, and many of them wanted Mao. They were very radical. It basically turned China upside down. There was no productivity . . . no systematic study in school. We just studied Mao’s articles, books . . . basically, all propaganda. But at this time, I found my interest in music,” he said.

This interest would develop into a lifelong passion—one he pursued even in the face of criticism from communist radicals.

“I took violin lessons privately at that time. If you played foreign music like Beethoven or Mozart, especially using a western instrument, you were regarded with suspicion. So, I played with my violin muted and my curtains closed. Mao had a very famous saying: ‘use the past to serve the present; make the foreign serve China.’ So, the violin was okay for playing revolutionary songs, but to learn the violin, you need to play a foreign repertoire. I had to very privately practice this.”

Mao encouraged violent persecution toward those who opposed his movement and millions were effected.

“Mao was also against a lot of traditional Chinese values,” Wei said. “Including from our own cultural heritage, like Confucianism. No one would even dare to talk about [that]. A lot of teachers and professors faced criticism because of this. They became targets because they were teaching foreign, traditional things.”
Some teachers were persecuted, including notable mathmetician Xiong Qinglai, physicist Rao Yutai, and anthropologist Wu Dingliang.

“So, the teaching profession became lowly regarded, which was very different from Chinese history. Thankfully, after the Cultural Revolution, things went back to normal,” commented Wei.

The people of China began returning to their roots and traditions, remembering their values. Wei could now play his violin freely, so he enrolled in the Shanghai Conservatory of Music.

“In China, I think kids were pretty much like they are today in the United States. They do some extraordinary things. Back then, we practiced and studied like crazy. I played violin six to eight hours every day in addition to all of my other classes—music theory, history, all of these classes. So, we got tired, especially in the evening. We had a relatively more rigid res-life system [than Rollins]. We had a wall around our campus. Every night at 11 the door closed, and we could not go out or come back in. So, we hopped the wall and went out for beers.”

Wei pointed out that the Cultural Revolution delayed education, so he was about 25 years old at this time—well beyond the legal drinking age in China (which is 18).

Wei also had some parting words of wisdom for college students.

“I think you have to find your passion,” he said. “Regardless of how difficult something is—writing, playing music, even fixing cars—if something is your passion, you must pursue it. That does not imply, however, that if you find your passion, you should just go ahead and stick with that. Your career is a separate thing. We have a lot of students who take one major and then, after they graduate, end up on a completely different career path. The major you choose does not necessarily become your career, but it’s all useful.”