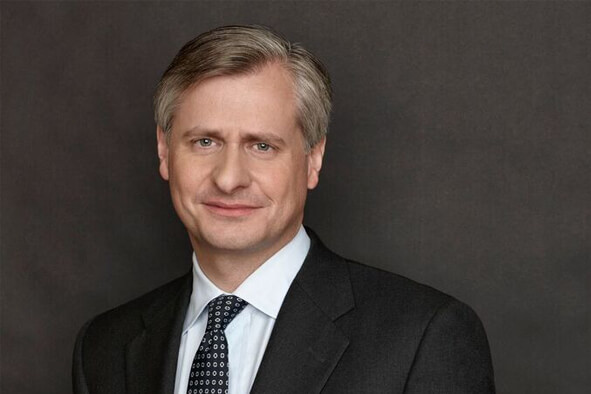 Jon Meacham, Pulitzer Prize-Winner, New York Times bestselling author, and renowned visiting professor at The University of the South and Vanderbilt University, will be making an appearance on campus for a one-night speaking engagement in partnership with the Winter Park Institute on September 12 in the Knowles Memorial Chapel. During the presentation, Meacham will be discussing his knowledge of leadership, politics, and the American presidency.

In January of 1995, he joined the staff of Newsweek, a popular American weekly magazine, as a writer. After just a few months he was named national affairs editor, and in 1998 became managing editor. He served in that position until 2006, when he was named Editor-in-Chief of the publication. Prior to and following his departure from Newsweek in 2010, Meacham has also been associated as a reviewer at The New York Times and The Washington Post.

His presidential biography of Andrew Jackson entitled American Lion: Andrew Jackson in the White House won a Pulitzer Prize, arguably one of the highest distinctions awarded for journalism and the arts, for the Biography category in 2009.

After receiving the 2009 Pulitzer Prize in Biography, Meacham went on to write several other critically-acclaimed, New York Times best-selling novels including Thomas Jefferson: The Art of Power, American Gospel: God, the Founding Fathers, and the Making of a Nation, and Franklin and Winston: An Intimate Portrait of an Epic Friendship.

Additionally, Meacham holds a number of honorary doctorates from a variety of institutions including Middlebury College, Wake Forest University, and the Berkeley Divinity School at Yale University.

Meacham’s accomplishments are innumerable but some of his most notable positions and distinctions include serving as the executive editor of Random House publishing company, being an active member of the Council on Foreign Relations and of the Society of American Historians, and co-hosting the popular PBS program “Need to Know” with Alison Stewart from 2010 to 2011. Additionally, he has appeared on a variety of CNN programs, as well as MSNBC’s “The Morning Joe” as a frequent guest and political commentator.

His presentation at Rollins College on September 12 will explore lessons from the American presidency and extensively examine the principles of leadership and politics. Hosted by the Winter Park Institute, the event will be held in Knowles Memorial Chapel and will begin at 7:30 p.m.

Students, faculty, and community members are all invited to attend the event while tickets remain available. Student Ana Kingsborough ’21, is “looking forward to participating in the experience of a lifetime and is eager to hear Meacham’s opinion of our current political climate.” Similarly, Bridget Gorman ’21 described her anticipation by exclaiming, “(Meacham)… is incredibly knowledgeable of government and politics and I think everyone who attends will get a lot out of the presentation.”

Tickets are available through the Winter Park Institute’s website, www.rollins.edu/rollins-winter-park-institute/events/2017-2018/jon-meacham.html. Make sure to purchase yours today in order to participate in this historic event and learn about some of today’s most pressing issues from one of America’s most prominent public intellectuals. You can learn more about Jon Meacham at his website, www.jonmeacham.com.