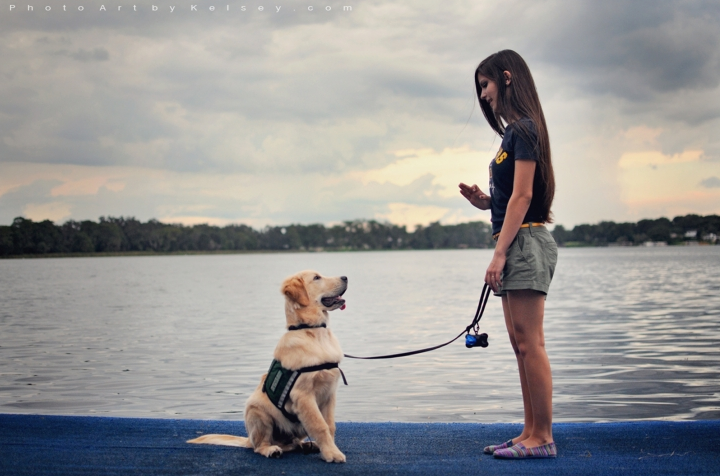 Before you read this, I encourage you to think of Rollins. How many people do you see with disabilities? Maybe one or two? How many buildings on our campus are accessible for an individual in a wheelchair? Most require a journey up steps before accessing a tiny, old elevator. And finally, how many times have you seen my best friend, Rachel, around campus with a service dog and called her a “blind girl,” pet the dog, or speculated with your friends about why she needed a service dog? She is training the dog to give someone freedom and independence in their lives. We want to change the way you think, Rollins. We want to promote disability awareness and show you that the puppies you enjoy playing with on the lawn are going to change someone’s life in ways that those without disabilities can’t imagine.

I met Rachel during my first semester at Rollins and we immediately bonded over our love of animals, mainly our obsession with our dogs, both labs. When I discovered that Rachel’s personal dog, Samson, was a therapy dog, I admired her dedication. When I adopted my personal dog, Shasta, almost three years ago, my mom and I had high hopes for him to become a therapy dog and dreamed of taking him to the hospital to visit sick children and have children with learning disabilities read to him to provide a stress-free environment. I soon discovered how hard, and sometimes impossible, it was to train a puppy and how much dedication, persistence, and countless hours of hard work it takes.

Rachel began to bring the first service dog in training to campus last September. As part of a weekend raising program, she had him from Friday-Monday. The class enjoyed having the animal in class and professors were excited. During this time, I learned about service dogs and their roles in the lives of people with disabilities. Prior, I had thought that working dogs were only for the blind.

I began to work with Rachel months later, after she held many meetings with the school administration regarding having the dog stay with her in her dorm. I remember her frustration when she, along with the president of the service dog organization, could not come to an agreement with the school in terms of having a service dog in training on campus. Another very large problem was confusion in regards to which office to approach to help advocate and move the process along. There was a ton of confusion in who to talk to on an administrative level.

We analyzed the reasons the school was not keen about our program, broke them down and brainstormed many possible solutions. As part of my Leadership Ally Program, I worked closely with Sara in OSIL to implement SIT, a club on campus so everyone could get involved with the amazing work Rachel was doing, work that inspires me and has made me a strong disability advocate. Rachel and I discussed what we would like SIT to be and how puppy raising would be incorporated. I brought the ideas back to Sara for help compiling them in a logical form to set the organization up to succeed. Rachel and I then met with Residential Life and presented a 12-page proposal that I wrote. The proposal contained an opening letter to the administration, the purpose of SIT, information about service dogs, what we hoped to accomplish on campus, what we needed to accomplish these goals as well as some legal jargon from ADA laws.

I learned about service dogs and their roles in the lives of people with disabilities.

After weeks of crossing our fingers, praying and performing weird witchcraft rituals for good luck,(just kidding) our proposal was turned down. We were angry, we were upset, we were disappointed and above all we were confused. I was confused to the point where, on a whim, I gave the most eloquent speech to the Dean regarding our school’s designation as a changemakers campus and the resistance I felt during this whole process. Rachel and I both expressed how we believed in this—and we weren’t giving up. The administration had not seen the last of us.

Our next step was Micki and Meredith in OSIL, who were our number one supporters. They helped us explore different outlets. The phrase that sticks out in my mind is a quote from Micki, “You’ve tried the doors and now it is time to try the windows.” We explored taking the issue through faculty governance and began to compile a list of supporters—both student leaders and influential members and professors on campus. During this time, we were empowered. Virtually every leader on this campus supported us and what we were advocating.

Next was, finally, our victory. We scheduled a meeting with President Duncan and Provost Bresnahan, and Chrissy from SeSi came for support.
We prepared agendas, speaking points and an overview of what we hoped SIT would do for our campus.

We had carefully thought out responses for every question and every concern. Soon into the meeting (that Rachel and I expected to be long and grueling), President Duncan and Dr. Bresnahan expressed their approval for our organization. The only exception being the service dog in training living on campus due to air circulation and allergies in the residence halls.)

It seemed as if they had heard about what we were trying to do, but the previous administrators that we had spoken to did not accurately convey our hopes and goals for the students of Rollins. I will never forget the way that I felt and the excitement on my best friend’s face.

I believe our story is an inspiration to all students who have had a “crazy” idea and have had it shut down. Those crazy ideas that we have are the ones that are going to change the world. Rachel and I are seeing a change in the Rollins campus with SIT’s work and we can’t wait to spread the knowledge, empowerment, and advocacy to those who want to join us.