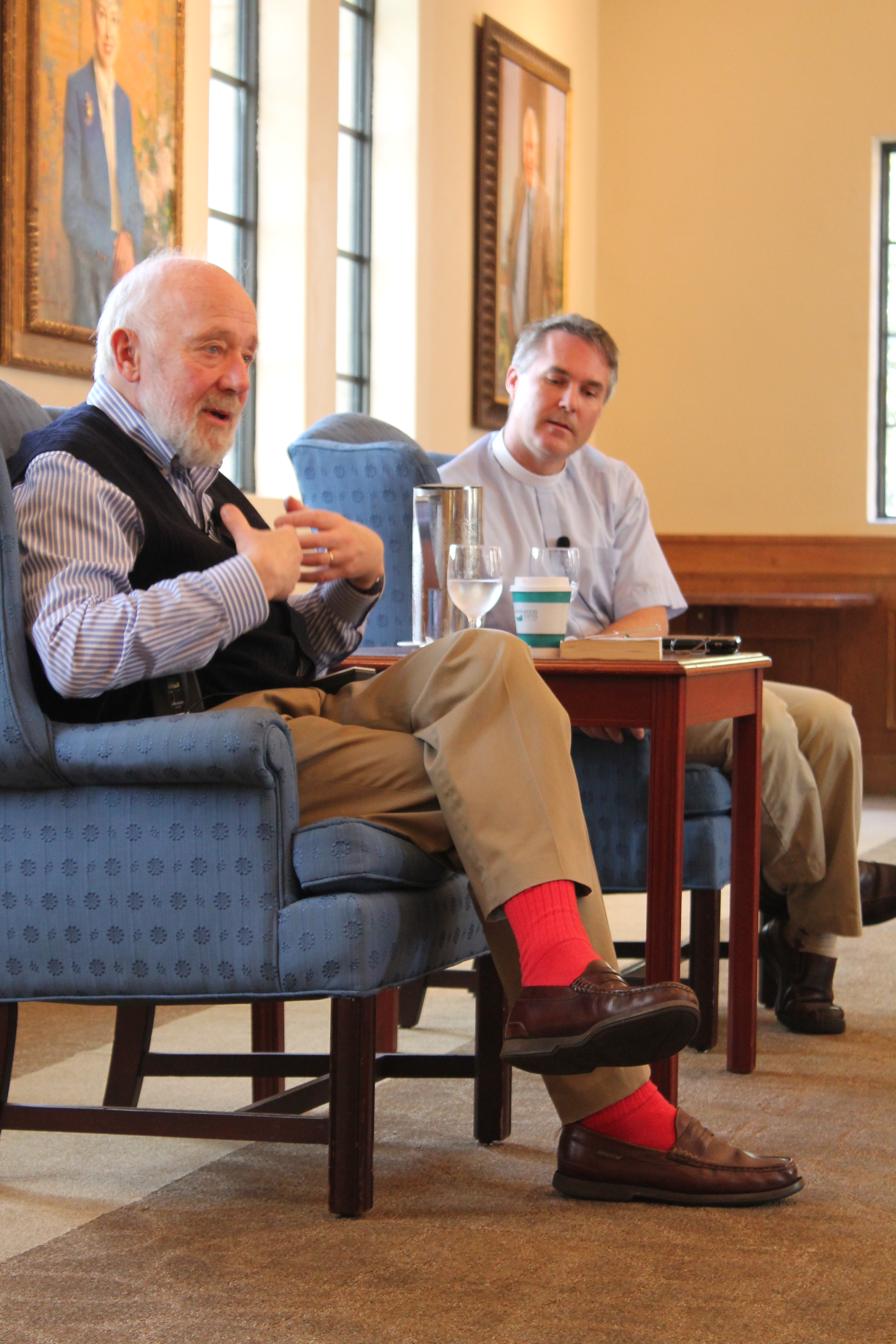 Raising the Dead and Raising Debate

Sitting in comfortable armchairs, a scene reminiscent of a fireside chat, guests Dr. Marcus Borg and Rev. Charlie Holt held a discussion on Thursday, Feb. 7, titled “Believing in the Resurrection: Was Jesus Actually Raised from the Dead?” A few students were in the audience, but the majority was composed of well-to-do older men with furrowed brows, crossing and uncrossing their arms and nodding thoughtfully in response to the speakers.

Dr. Borg, a leading liberal theologian and retired professor from Oregon State University, was seated on the audience’s left; Borg advocated for the proposition that Jesus’ resurrection should be taken metaphorically. Rev. Holt, a rector of St. Peter’s Episcopal Church, was positioned on the right with the stance that Jesus’ resurrection should be taken literally. The entire discussion can be broken into two different paradigms: Dr. Borg advocated for a metaphorical interpretation of the Bible, giving the individual an opportunity to find meaning in the text, while Rev. Holt called for a literalist interpretation, and belief, in Scripture.

Dr. Borg is an older gentleman, dressed primly in a conservative sweater vest, paired with a pinstripe, anchor-blue button-down. His voice was filled with wisdom and sincerity, speaking with care as he took time to articulate his thoughts fully. Rev. Holt was a charming forty-something man who seemed to be used to both a sense of superiority and being well-liked by others; he had the eye-sparkle of someone who felt spiritually connected and flashed a grin that was clearly well-practiced.

The premise of the discussion was a question presented by Dr. Thomas Moore of the Physics department: if one believes in the spiritual resurrection, is it necessary to believe in the physical one? Dr. Borg was the first to speak; as he adjusted the microphone, he opened with the line: “I sound a little bit like the voice of God to myself.” Dr. Borg cited New Testament passages that called for reconsideration of the physical assumption of Jesus’ resurrection. Noting how the Bible reads that Jesus appeared in a vision, Dr. Borg suggested to the audience, and to Rev. Holt, that perhaps Jesus’ resurrection was a spiritual one: Jesus was experienced in the presence and not just as a distant memory.

He drew the parallel to the modern day in that Jesus lives in the heart of people who have felt a connection to God through Jesus; he noted that much of the Bible was not to be taken literally. Giving examples of various parables, Borg stated that it was the meaning, not the confirmation of the story, which made it significant and worthwhile.
Rev. Holt opened on a personal note, sharing with the audience his journey to Christianity, or, what Christians refer to as, a testimony. He recalled that, when he was a young boy, he attended a school that advocated for a more metaphorical interpretation of the Bible; it was not until later in life that Holt considered the resurrection to be an actual historical event. Rev. Holt fully accepted the Christian faith. Operating on the premise of “if it’s just a story, then why does it matter,” Dr. Borg responded with the idea that stories are important because we, as individuals, give them meaning.

Many are used to hearing what Rev. Holt had to say as it is the predominate Christian message that permeates the news; it is the classic “the Bible is the Word and Jesus is the way and any naysayers are doomed to a fiery Hell, no exceptions, the end” that so many find unsavory. The extreme and unwavering absolutism seems to be a characteristic of various religions, and some of their respective followers are willing to lose friends or die for their beliefs.

The conversation regarding the resurrection of Jesus presented two distinct perspectives: Dr. Borg’s position seemed to operate in the realm of spirituality, self-fulfillment, and peace through connection to a higher power: God. Rev. Holt advocated such a reality as well, with the addition that Christianity is the only path. Rev. Holt’s belief stemmed from the idea that what is in the Bible was true, factual, verified, and historical.

This stance becomes problematic when considering the modern day, 2013 human beings: it is difficult for us to accept assumptions without verification. It seems that some parties, including the one that Rev. Holt vouches for, get too caught up in the “factual” and “historical” elements of the Bible instead of looking at the overarching message. Dr. Borg encouraged the audience to consider this approach.

At the heart of religion is the potential for an individual to feel a connection to something greater: a Oneness, the Universe, a Life Force, God. The connection is remarkably powerful and profound, but it seems that religions get tied up in the fine details: what is the right way to make that connection?

We will never know if Jesus Christ is the only way to the Great Divine, unless, of course, fire and brimstone rain down upon us and all the descriptions in the Book of Revelation manifest in the sky. But even then, such events could be interpreted in other ways. In essence, the only truths are the ones that we, as individuals, consider to be real and legitimate, and we can dismiss anything that contradicts our beliefs. It seems that, all too often, individuals fall prey to the egocentric desire of being right and lose focus on the overarching themes that they believed in initially. The discussion served as a powerful example of how two different realities can be crafted from a single theme. Whatever preconceived beliefs the audience held prior, a good portion of them likely left with a different perspective and, consequently, a different reality.