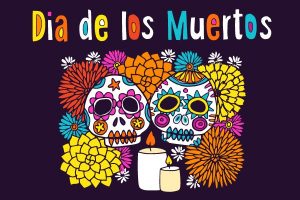 Rollins showcased its cultural awareness and diversity with this past week’s Dia de los Muertos celebration, which is Spanish for ‘Day of the Dead.’ The memorial event was sponsored by the Department of Latin American and Caribbean Studies, and occurred on the beautiful back patio of the Cornell Fine Arts Museum overlooking the lake. It was a perfect day for the event, with a consistent, cool breeze and perfect timing due to the presence of warm sun’s “golden hour” that shone on the altar and the guests.

The main attendees included students currently enrolled in Spanish classes and students involved in other culture-oriented classes, such as Summer Sullivan ‘19. Sullivan explained, “I am here for my neighborhood class. I’m in the neighborhood When Cultures Collide, and I’m taking Global Popular Music. I came here to learn more about different cultures.” Sullivan shared some of the facts she learned at the celebration, including that “the reason why Dia de los Muertos is on November 1 or 2 is because it coincides with the Catholic holidays of All Saints Day and All Souls Day.”

Certain aspects of Latin culture and the specific holiday’s traditions were present at the event. Chicken and vegetable tamales were served and an altar was arranged to honor the deceased loved ones of the Rollins community, which is the main tradition practiced by Dia de los Muertos celebrants. One of the standout items placed on the altar was a specially framed collage to honor the victims of the Pulse shooting.

Furthermore, Professor Almond’s 3D Foundations art class prepared a unique presentation for the event, which added excitement and color to the patio. Following an explanation of the meaning behind the holiday, art students paraded cardboard, PVC pipe, and paper mache creations into the space to display their Dia de los Muertos-inspired sculptures. Most pieces were designed with specific Aztec gods in mind, according to McKenna Leaden ‘20, who is a member of the class. All structures were huge in size and adorned in gorgeous hues. It was an interesting sight to witness due to the students’ commitment to authenticity, as they dressed like their sculptures as part of the presentation.