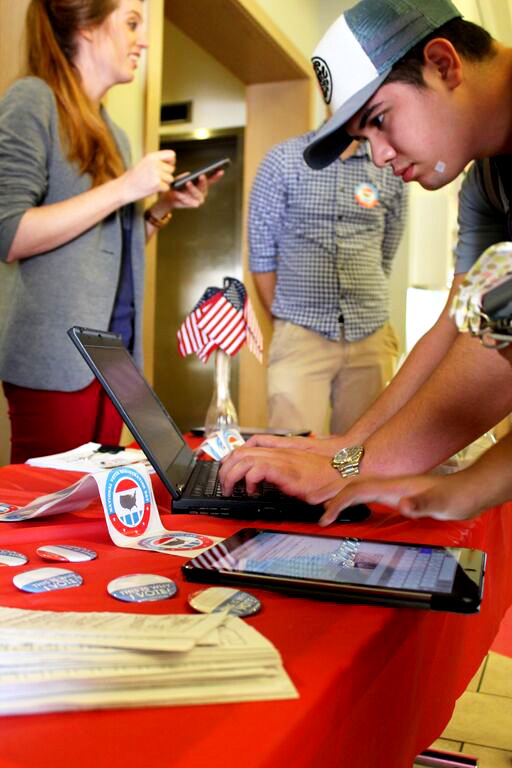 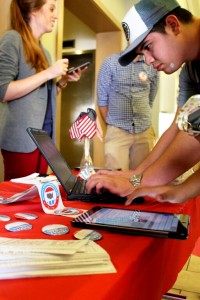 It is often said that the target voting population is primarily college age, the “change makers” to be. In order to effect any change, though, students have to vote, and not only for presidential elections. On September 22, National Voter Registration Day, the Democracy Project, SGA, WPRK, and EcoRollins all partnered to encourage electoral participation on our campus.

On Tars Plaza, out in the blazing heat from 10 a.m. to 2 p.m., these various organizations set up tables to reach out to the student population.
The Democracy Project motivated passing community members to make use of their online medium ‘Turbovote’ to register to vote quickly and easily, with the option to choose absentee ballots for their home towns, or vote in the Winter Park Elections. With a table decorated with voting pins and stickers, the mood was festive, patriotic, and friendly.
Democracy Project Student Coordinator James Ryan ’17 explained that Rollins College is currently “tenth in terms of percentage of students registered through TurboVote (which is one of the primary methods colleges use).”
Plans to further increase voter registration are underway, and, as Ryan stated, “National Voter Registration Day was just the start. We will be continuing to offer voter registration opportunities across campus during the lead up to the presidential election year to ensure that all members of the community have a chance to voice their votes.”
Student Body President CJ Dunn ’16 represented SGA that afternoon as well, encouraging voter participation of a slightly different sort. In order to gauge where Rollins stands on areas like alcohol.
Dunn distributed surveys to students regarding how they would feel about Dave’s Boathouse providing alcohol at tailgates and extending the BYO policy to tailgates as well. BYO stands for the “Bring Your Own” policy, which allows students 21 and over to bring a six pack of beer (no hard liquor) to events. By the end of the event a considerable number of the student population had taken the poll.
NextGen Climate also worked on engaging the campus in issues demanding involvement in order to effect change. A nonpartisan organization acting politically to prevent climate disaster and promote prosperity for all Americans, NextGen worked on reaching out to the students as well.
With the combined efforts of these four organizations, it is fair to say that National Voter Registration Day was a success.