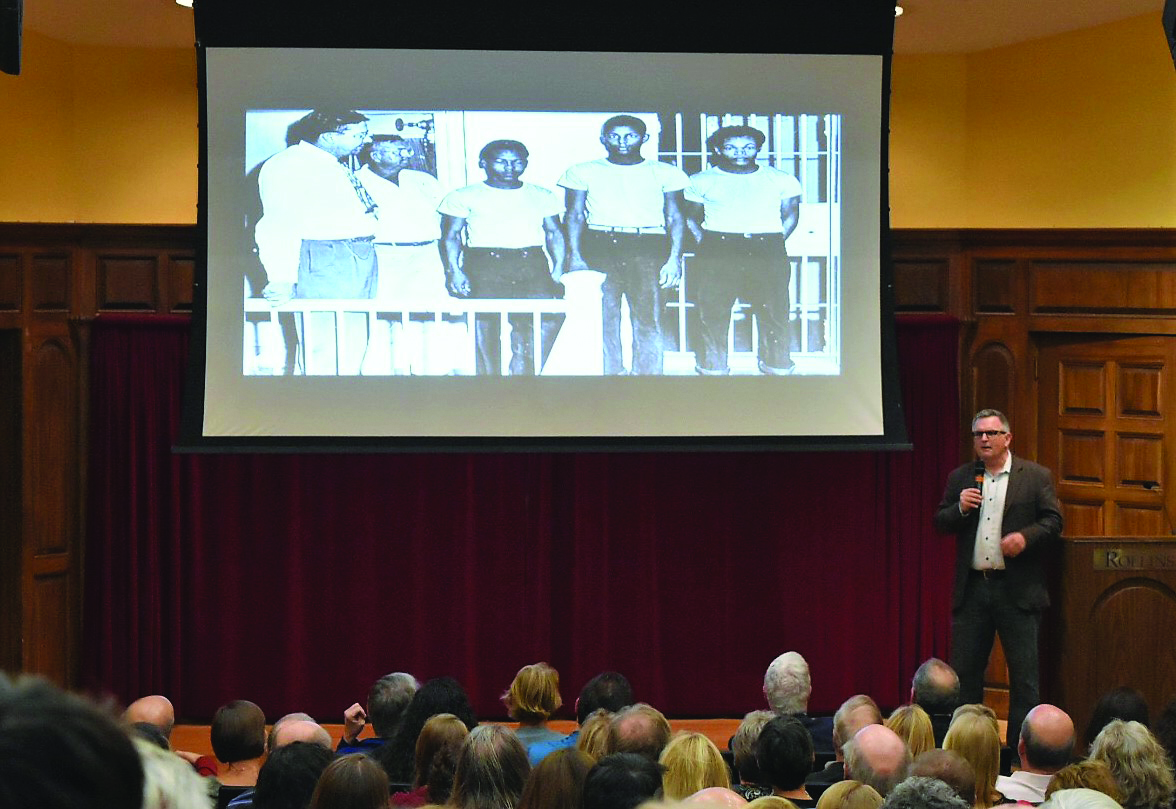 Pulitzer Prize-winning journalist and photographer, Gilbert King, came to Rollins last Saturday, delivering a speech about his last work, Devil in the Grove. He discussed the atrocious racism of the Florida legal system in the ‘40s and onward, a corruption that doomed four young black men for a rape they did not commit.

Photographs were presented depicting segregated water fountains, bathrooms, and building entrances: what we know as the Jim Crow South—and all part of what King called, “whitewashing our history—we don’t want to face some of the more uncomfortable elements of our history.”

These acts of segregation were cruel and demeaning, obviously, but King punctuated his point with a single photograph: a lynched black man hanging in the foreground, and a young white girl in a Sunday dress posed, smiling as she stands next to a corpse. In a time where lynchings and beatings were commonly committed—by law enforcement no less—segregated water fountains were a red herring at best.

Much of what King shared of Devil in the Grove involved attorney Thurgood Marshall, a man willing to take on the Florida cases no one else would. The most Marshall could often hope for was getting them life in prison, considering most black men were being sentenced to death on a regular basis.

The book quotes Thurgood Marshall as saying, “That’s how you knew the jury thought they were innocent—they only gave [the defendant] life.” This is the sort of environment black men and women had to endure for decades, and the perpetrators were the people who are supposed to protect us from injustice.

As King chronicled all this, the entirety of Bush Auditorium—full house—was as silent as the photographs behind King. His storytelling was masterful; he utilized a matter-of-fact tone when describing the worst atrocities, emphasizing how normal they were for the time period. He went off on tangents that delivered unnerving information about the subject, and he delivered historical accounts as suspenseful narratives.

“I would say that my experience in photography has helped me with the visualization aspects of storytelling,” King said in response to my asking how he weaves together photography and writing. “Sometimes thinking about scenes cinematically can be helpful with description. I would also say that photographers are usually excited about something new or foreign to them.”

What should be a journalist’s primary concern? “A journalist… should be diligent with research,” answered King. “Be intensely curious and try to learn as much as you can so that you understand the context of the story you are working on. The more you learn and discover, the more likely you’ll find that your story isn’t quite as black and white as you might have thought when you began.”

Gilbert King’s speech captivated the audience. One has faith that Devil in the Grove offers similar enthrallment, especially since King describes the events within the books as “The most revolutionary events I’ve learned from my work.”