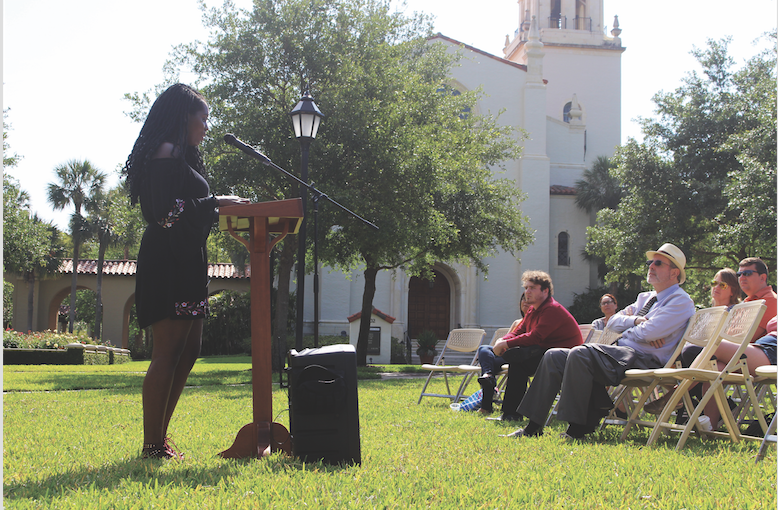 Taking a stand against gun violence

Students and faculty gathered together on Bush Lawn to commemorate the 19th anniversary of the Columbine tragedy.

Participants sat to honor those who have lost their lives to gun violence. Many of those gathered there also read  moving speeches, recited poems, or gave performances.

The Commemoration of Columbine event was the idea of Jordan Boyd ‘21, an off-campus Holt student, who wanted to create the event in order to draw attention to the increased number of school shootings in the last 19 years. Boyd asked the Off-Campus Student Association (OCSA) to help coordinate the event.

On April 20, 1999, two students of Columbine High School in Littleton, Colo. brought multiple weapons to their school, including a semi-automatic handgun, and began shooting fellow students. 13 people were killed and more than 20 wounded. At the time, Columbine was the worst high school shooting in U.S. history.

According to The Washington Post database, over 208,000 students have experienced gun violence since Columbine. That is equivalent to approximately 10,947 students experiencing gun violence every year.

According to the same database, there have already been 13 school shootings in 2018 alone.

On April 20, students across the nation participated in school walk-outs to protest gun violence, espousing the message that “enough is enough.” The Commemoration of Columbine event was in solidarity with this national movement, given the absence of an official walk-out event at Rollins.

The event featured several students and faculty who shared speeches about past school shootings. However, these speeches were not a mere repetition of facts and figures, like some featured on the daily news. These speeches recounted the lived experiences of survivors, the reactions and feelings of victims’ parents and loved ones, and how these individuals continue to fight against gun violence in America.

These speeches gave faces to the figures and humanized the tragic events that occured. In doing so, these individuals conveyed the need to avoid becoming desensitized to such acts of violence.

Iman Gareeboo ‘18, president of OCSA, said, “We wanted people to remember that many horrific shootings have happened, since we tend to forget about older shootings every time they hear the phrase ‘another school shooting has happened.’”

“We also picked shootings that people are unlikely to know about in order to illustrate that many more shootings happen than people are generally aware of. Overall, our message was that students and teachers should worry about school shootings because both have lost their lives in active shooter situations,” said Gareeboo.

In addition to these speeches, multiple poems about gun violence were recited. The winners of the Haiku Contest held by the English Department and Sigma Tau Delta were announced at the event: grand prize winner, J. Diego Medrano ‘18, and the two runner ups, Melissa Simon ‘19 and Chase Walker ‘19.

Students also conducted musical performances at the event. At 11:19 am, Erin Henderson ‘19 played “Amazing Grace” on the violin to mark the time when the shooting began at Columbine High School.

Alex Candage ‘20 and JoAnn Wood ‘21 sang “Found Tonight,” a song released and sung by Lin-Manuel Miranda and Ben Platt in honor of the March for Our Lives. The song is a mash-up of Brodway musical ballads: “The Story of Tonight” from Hamilton and “You Will be Found” from Dear Evan Hansen.

Such unity and activism is a testament to the spirit of Rollins and the dedication of the student body to service. Hopefully, with continued efforts and events such as these, gun violence will become a thing of the past.