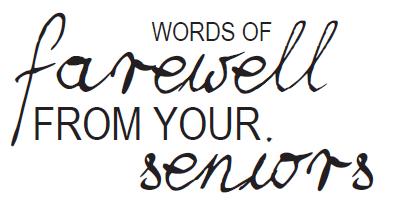 Words of Farewell From Your Seniors

What does Editor-in-Chief mean? I’ve worked in this position for an entire year now and I’m not sure I can even answer that question. But, what I can say is it’s a personal experience; something that is uniquely different for every person. And I think that’s what I want to be remembered as: uniquely different. I’ve addressed you: the readers, the writers, the lovers and the haters of this paper, several times this year, and I hope that my words have influenced you in some way. I hope they made you smile, I hope they made you think, I hope they made you want to tear up this newspaper and use it to clean something you spilled. Because, by having any of these reactions it means you were moved to action, and that’s what a newspaper should do, move the community for which it publishes.

It’s now been four years since I committed myself to this windowless office that I have at times hated, but always found a way to love. I’ve seen this campus become enraged and overjoyed by the content put forth by The Sandspur. I’ve been told the paper is pointless and I’ve been told the paper is vital to our college. We’ve been on national news, broken major campus news on multiple occasions and made some glorious failures along the way. Through all these things I’ve witnessed in these four years, I could not be more certain that The Sandspur is my home. Every other Thursday I welcome you in to experience what’s been my source of happiness for four years.

Hard to believe, but I’ve reached the ultimate deadline: graduation. And unlike with the newspaper, it’s not a flexible deadline. So I leave you with some final requests: allow yourself to be moved, challenge the standard no matter where you end up, and finally, find your own unique difference. The Sandspur taught me that, and I hope you all find something that will teach it to you.

Perusing the tables in the gym at the involvement fair during my first-year orientation, I don’t think I ever imagined I’d be managing a newspaper in three years’ time, but here I am. With no newspaper experience, I was hired as an at-home copy editor with no real ties to the layout of The Sandspur other than making sure a couple articles followed AP style.

By the end of my first year, I had somehow ended up as an in-office copy editor, which is when this insane, brilliant experience really began. As for the editing, I was meticulous and the style guide became a sacred text. As for the paper-making as a whole, we certainly weren’t always the most efficient, but we had a hell of a lot of fun with everything from 2 a.m. strobe-light parties to breaking open a frozen-shut fridge.

I’ve been through a lot since my first days on staff and so has The ‘Spur. We’ve changed and grown, and for my part, I know I owe some of that to the lessons I’ve learned and experiences I’ve gained here in our office. If it is not yet evident, The Sandspur has been more than a job or another extracurricular activity. The staff members, past and present, have become my friends and my family — many of whom I probably wouldn’t have found if it weren’t for this paper. Encouraging, challenging, accepting, they have spurred me on to “stick to it” day in and day out.

As a graduating theatre major, I don’t know if I will ever again say or hear “Let’s make a paper!” but for all the times I have, thank you. Thank you to those who read the final product and to those Sandspurians who helped make each issue possible.

“What do you like to do?” My freshman year, I got lost in the Mills building, came to the Sandspur office and heard these words from the then-editor-in-chief. It was a good question.

What did I like to do? The problem was that I liked so much. The thing I loved and still love about The Sandspur is that it gives students so many opportunities to do what they enjoy within one organization.

So I did. My time as head copy editor has been great. I’ve learned so much about the paper and about the people I’ve come to consider good friends. It’s not only our relationships that have evolved; having been on staff during my entire stay at Rollins, I can honestly say that The Sandspur of today is nothing like the ‘Spur of 2008.

It has come such a long way in such a short period of time. Even on those nights when we all just wanted to go home and get some much-needed sleep, the Sandspur staff pushed through to produce what I see as a quality product.

I hope that the campus has grown to enjoy reading the paper just as much as we’ve enjoyed producing it. Has it really been four years? It’s hard to believe.

Now it’s time to leave the place that’s been my second home all this time to join the other seniors preparing to get a “real life.” No more 2 a.m. layout nights in the office… Maybe it won’t be so bad after all.

I wish all the best to the present and future Sandspurians. I hope you experience great things with the ‘Spur just as I have. Try to have fun and, obviously, stick to it!