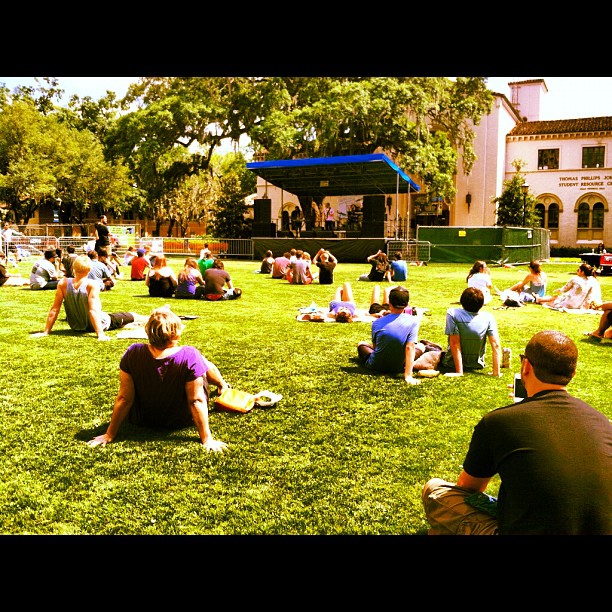 After months of anticipation and preparation, the 60th anniversary celebration of 91.5 WPRK-FM arrived the week of April 1. From Monday through Friday, WPRK hosted a “fund-a-thon” to raise money that will be used to improve the station’s outdated technology. A few DJ favorites did seven-hour shifts as guests appeared for interviews on air, such as President Duncan and WPRK alumnus Phil Muse ‘80.

A variety of bands also played live on air, ranging from jazzy blues-rock singer Kaleigh Baker, to progressive rock band Bellows, and to a scantily-clad rock act Room Full of Strangers. WPRK ended the fund-a-thon with a screen-printing party to create shirts for the concert the following day.

The big finale of the week was the monumental concert WPRK organized on The Green. A wide variety of music acts had something for everyone, and included: Sam Byck and The Tricky Dickies, Room Full of Strangers, Savi Fernandez Band, Run for Cover, Laney Jones, SKIP, KG Omulo, Saskatchewan, Yip Yip, Hundred Waters, Beebs and Her Money Makers, and headliner The London Souls.

Perego, art entertainer, ended the night with an interactive art/rock performance and created an astounding mural of WPRK’s 60th anniversary. Local vendors surrounded the perimeter of The Green with popsicles, honey, crafts, hula hoops and more. Looking onto The Green, the lawn was transformed into a full-out music festival, and appealed to all ages.

Promotions Director Rob Soviero ’13 put a lot of effort and time into organizing the celebration, and could not be happier with the end result. “The concert was a success. Surprisingly, there weren’t any issues. The crowd was a mix of community listeners and Rollins students and staff, which was great to see. The performers were fantastic, and very professional, keeping the entire event on time, which is sometimes hard to accomplish. The venue and weather were gorgeous. There truly is no better place to have an outdoor event other than The Green at Rollins. We were very lucky and appreciate the opportunity to host such an event,” he said. Numerous students came up to the WPRK director staff with enthusiasm after the concert. “As many guests had said, Rollins needs to host similar events like this on The Green more often,” Soviero added.

As sad as the WPRK director staff is about the celebration coming to a close, we are looking forward to continue entertaining the Rollins community. If you thought our 60th anniversary celebration was huge, wait until you see our 100th.