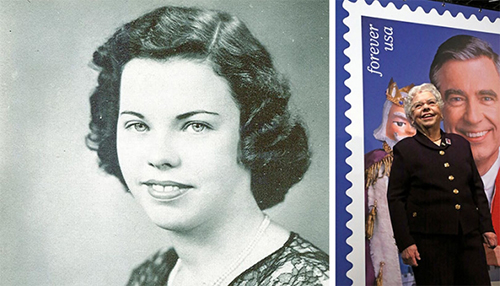 Alumna Joanne Rogers passes away at the age of 92

Wife of Fred Rogers made “goodness attractive” through nonprofit work

Joanne Rogers, Rollins alum and wife of Fred Rogers, passed away on Jan. 14 at the age of 92.

When Mrs. Rogers passed away earlier this month, the world lost a tireless advocate for kindness and decency, and the Rollins community lost one of its own. While hers was not a household name, she played a crucial role in shaping the legacy of someone who undeniably was: her husband Fred, better known as Mr. Rogers, who for decades graced thousands of TV screens on his iconic program “Mister Rogers’ Neighborhood.”

Born Sara Joanne Byrd in 1928, Mrs. Rogers grew up in a working-class family in Jacksonville, a contrast to her eventual husband’s wealthy upbringing in the Pittsburgh suburbs. The daughter of a postal employee and a homemaker, Mrs. Rogers began playing the piano at an early age. Her interest ultimately helped lead her to Rollins.

Mrs. Rogers attended Rollins after receiving a music scholarship. It was there where she met her future husband, who had transferred from Dartmouth College. The two quickly became close while bonding over their shared love of music, although they favored different genres.

After graduating, Mrs. Rogers attended Florida State University, where she received a master’s degree in music. During this time, Mr. Rogers, who was in New York working at NBC, sent Joanne a letter proposing to her, which she accepted over a payphone. After they got married in 1952, Mr. and Mrs. Rogers moved to Pittsburgh to start their family. The pair would have two sons, Jim and John Rogers.

While Mrs. Rogers only made occasional appearances on “Mister Rogers Neighborhood,” she was the namesake and inspiration for the character Queen Sara Saturday, who acted as a tempering influence on her husband, King Friday XIII. In her own time, Mrs. Rogers taught novice piano lessons and played professionally.

Mr. and Mrs. Rogers were married for over 50 years. When Mr. Rogers died from stomach cancer in 2003, Mrs. Rogers stepped into the spotlight in order to safeguard his legacy and carry on his message of kindness and compassion. Emerging as a celebrity in her own right, she appeared in the 2018 documentary “Won’t You Be My Neighbor” and made a cameo in 2019’s “A Beautiful Day in the Neighborhood,” in which her husband was portrayed by Tom Hanks, a casting choice that delighted her.

Mrs. Rogers spent the rest of her life making sure people knew that the Fred Rogers she was married to for half-a-century and the man they saw on TV were one and the same. She carried on his legacy through nonprofit organizations such as Fred Rogers Productions and the Fred Rogers Center for Early Learning and Children’s Media. Both her and her husband’s mission was to find a way of “making goodness attractive,” as she put it in her 2019 interview with NBC News.

Asked to comment on her passing, President Cornwell said the following: “Joanne Rogers, in word and deed, represented an ethic of kindness, genuine, humble, infectious kindness. We would do well to adopt it as our national ethic. I am always proud to claim Joanne and Fred Rogers as alumni of Rollins College.”

Although Mrs. Rogers was not as well known as her husband, she was every bit the role model for decency and kindness, and she left behind a legacy all her own.