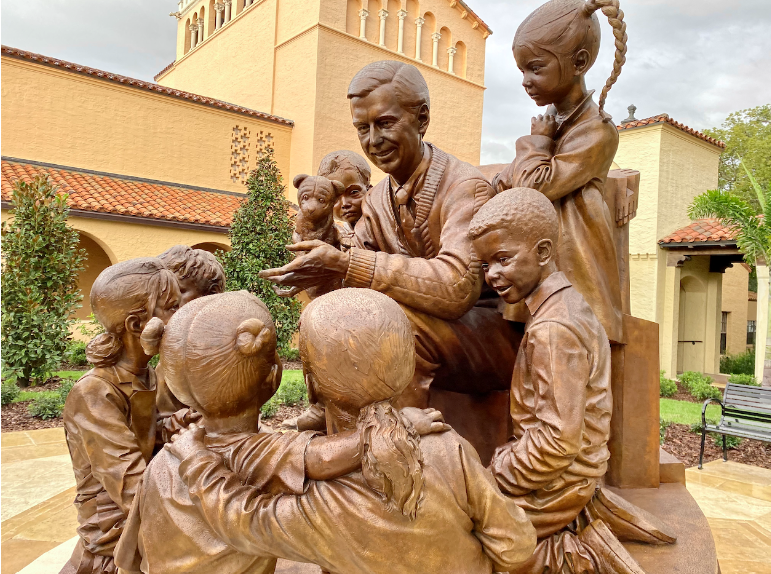 The Rollins community welcomed the latest addition to campus with the unveiling of “A Beautiful Day for a Neighbor,” a sculpture honoring the life and service of revered Rollins Alumni Fred Rogers (’51 ‘74H). On Oct. 28 amidst a downpour of rain, the sculpture unveiling ceremony was moved from an outdoor event to Knowles Memorial Chapel.

The sculpture is the latest creation of renowned British artist Paul Day, whose acclaimed work has been appreciated across the globe. Day took on the mission to memorialize Fred Rogers, creator of the groundbreaking PBS children’s TV series, Mister Rogers’ Neighborhood, after a chance meeting with Winter Park developer, Allan Keen (’70 ’71MBA ’10H). Keen, a Rollins alum and trustee, commissioned the 7-foot-tall sculpture.

The unveiling ceremony took place in Knowles Memorial Chapel and featured remarks from President Grant Cornwell, who expressed his gratitude to the artist and Rogers’ family for their dedication in bringing this sculpture to campus.

Rogers’ son, John, also addressed the attendees and spoke of his father’s everlasting love for Rollins and the college’s undeniable impact on his parents’ lives, which were dedicated to service.

“We can sure say it’s a special day in the neighborhood,” said John regarding the unveiling, “as it is on these hallowed grounds that my parents met here about 1947 and of course had a very nice long history together.”

Missing from the sculpture’s unveiling was Joanne Rogers (‘50 ‘05H), Fred Rogers’ wife, who passed away on Jan. 14 at the age of 92. Shortly after the sculpture had originally been commissioned, Day had been given the opportunity to meet with Joanne to discuss the project.

“This made it a very personal affair because when you work for an individual, you start to feel the emotional attachment,” Day said. “I was working with the knowledge that Mrs. Rogers would be there to unveil it, and she would have her own critical eye. So I really wanted to do something that she would be delighted with.”

The event featured a musical tribute from the Rollins Singers, including renditions of the iconic “Mister Rogers’ Neighborhood” songs, “Won’t You Be My Neighbor” and “It’s You I Like.” In addition, Dr. Daniel Crozier, professor of music, theory and composition, as well as Rogers’s nephew, performed an original piece in memory of Fred and Joanne Rogers.

The sculpture depicts Mister Rogers in his iconic sweater and sneakers, surrounded by children and hand puppets⁠—the inhabitants of the Neighborhood of Make-Believe. In addition, lyrics from the show’s memorable theme song are etched across the bottom.

Located in the Knowles Memorial Chapel garden courtyard next to the Annie Russell Theatre, the 360-degree sculpture is now open for viewing to students and the general public.