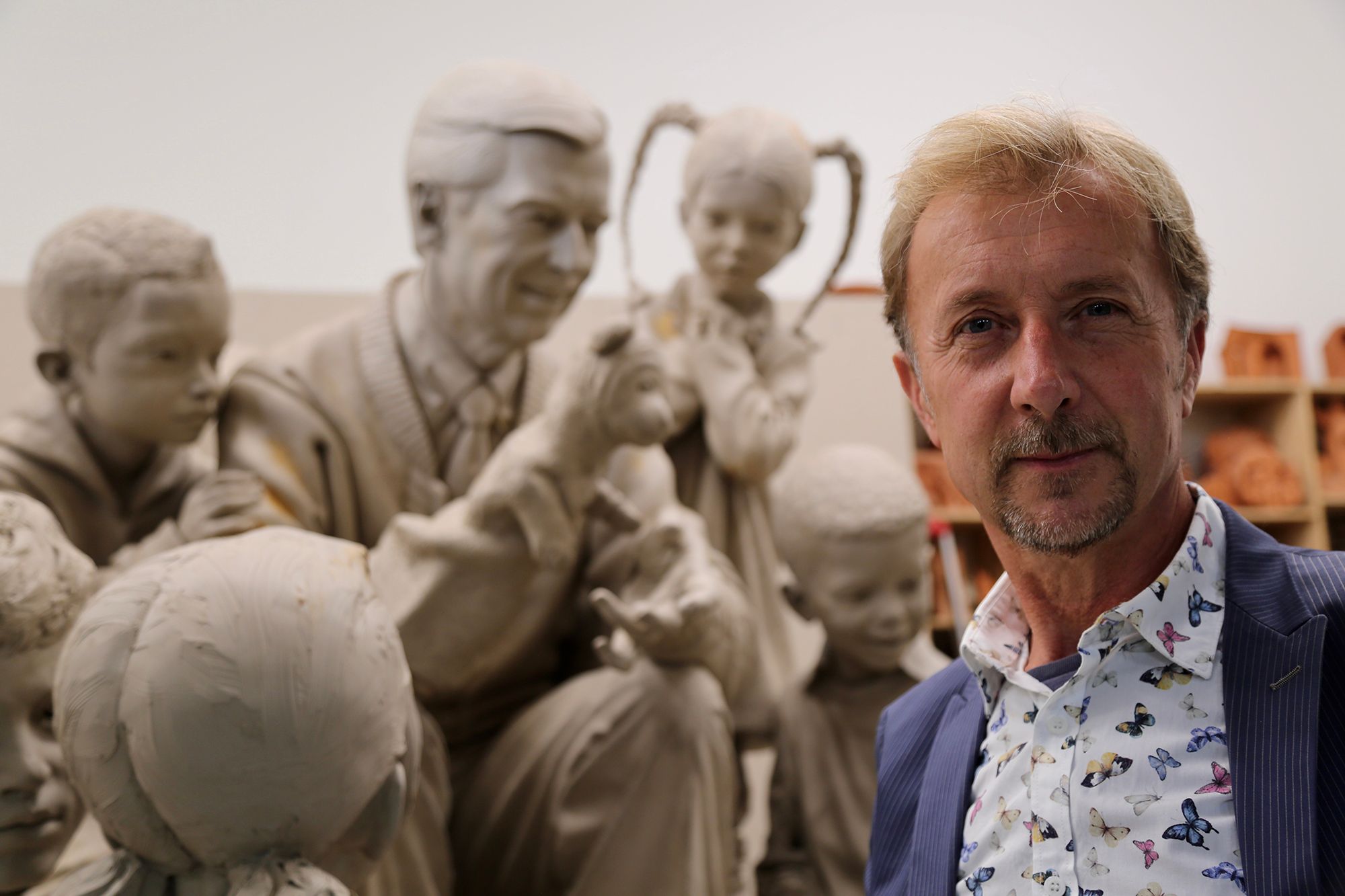 Mister Rogers sculpture to be unveiled this month

A new Mister Rogers sculpture will be unveiled on campus Oct. 28, thanks to the work of British artist Paul Day. His acclaimed sculptures can be seen across the globe, with monuments and exhibitions on public display in London, Brussels, Los Angeles, Moscow, and soon, Winter Park.

Day’s most recent creation, “A Beautiful Day for a Neighbor,” is a permanent outdoor tribute that honors the life and service of Fred Rogers (‘51 ‘74H), Rollins alum and creator of the PBS children’s TV series “Mister Rogers’ Neighborhood.”

The 7-foot-tall sculpture was commissioned as a gift from Winter Park developer Allan Keen (‘70 ‘71MBA ‘10H), a Rollins alum and trustee with a passion for sharing Rogers’ legacy with future generations of students.

Day, a British-born artist based in France, said that before taking on this project, “I didn’t know who Fred Rogers was, and I had never heard of Rollins College. But when I did, eventually, press the search button on Google, it was a bit of a damascene moment because I suddenly realized that this person was a significant cultural entity in the United States.”

Day explored Rogers’ life of service, watching episode after episode of “Mister Rogers’ Neighborhood” on YouTube and viewing many commencement speeches made by the show’s host at universities across the United States.

“I realized, firstly, that this was a very, very, serious invitation,” Day said. “Mister Rogers as an individual, and his work, had touched millions of hearts and minds.”

“So how to represent Fred was the question,” Day said. “What did the statue need to say?”

Day realized that Rogers would have always wanted the attention turned away from him and toward his audience– the children.

“I basically didn’t want to put him on a pedestal, and I wasn’t interested in making a statue of Fred,” Day said. “I wanted to tell the story of what Fred did that made him so exceptional.”

At his country studio near Dijon, in Burgundy, France, Day began to make the clay original of the sculpture, working between 10 to 15 hours a day, seven days a week. Over a period of 11 months and more than 4,000 hours of work, he depicted the American icon.

“I created this idea that it was going to be Fred involved with a group of children, telling a story through his puppets so that there would be a sense of interaction, a sense of curiosity, and it would illustrate the passion of his life and the reason why we want to celebrate him,” said Day.

On a recent trip to the US, shortly after the sculpture was commissioned, Day had the opportunity to meet with Rogers’ longtime wife, Joanne Rogers (‘50 ‘05H). The couple first met at Rollins College in 1948 and were married for 50 years before Fred passed away in 2003.

“This made it a very personal affair because when you work for an individual, you start to feel the emotional attachment,” Day said. “I was working with the knowledge that Mrs. Rogers would be there to unveil it, and she would have her own critical eye. So I really wanted to do something that she would be delighted with.”

Joanne Rogers passed away at the age of 92 in January 2021, just months before the scheduled unveiling. However, she was able to see images of the completed sculpture, and expressed her approval and appreciation shortly before her death.

“I feel that one of the lessons to learn from reflecting upon Fred and his work is that we become more fully human when we regularly engage with the child within us,” Day said. “The child in us is a more innocent, more pure form of ourselves, without some of the baggage that can corrupt our characters and natures.”

Day is hopeful that his sculpture inspires others to live up to the values embodied by Rogers: respect, compassion, kindness, integrity, and humility.

“When a work of art leaves my studio, it takes on a life of its own,” Day said with a smile. “The conversation is no longer between me and the work, but between the work and whoever wants to stand in front of it and dialogue with it.”

Day’s finished product depicts Rogers in his iconic sweater and sneakers, surrounded by children and hand puppets, known as the inhabitants of the Neighborhood of Make-Believe. In addition, lyrics from the show’s memorable theme song are engraved across the bottom. The sculpture weighs more than 3,000 pounds.

“Having been granted the trust of Grant Cornwell, Allan Keen, the college in general, and the faculty and staff with whom I’ve spoken, and obviously knowing how important of a figure this was in the American psyche, there’s a lot riding on it,” Day said. “It’s my first large-scale public work in the United States, and hopefully it will be well received, but that’s up to the students, alumni, and public to decide.”

The sculpture will be unveiled in a private ceremony on Oct. 28. A live stream will be available online and also screened in Knowles Memorial Chapel and Bush Auditorium.

“A Beautiful Day for a Neighbor” will be open for public and student viewing starting Oct. 29 at 10 a.m., when students will be able to meet the artist and view this latest addition to the Rollins campus.