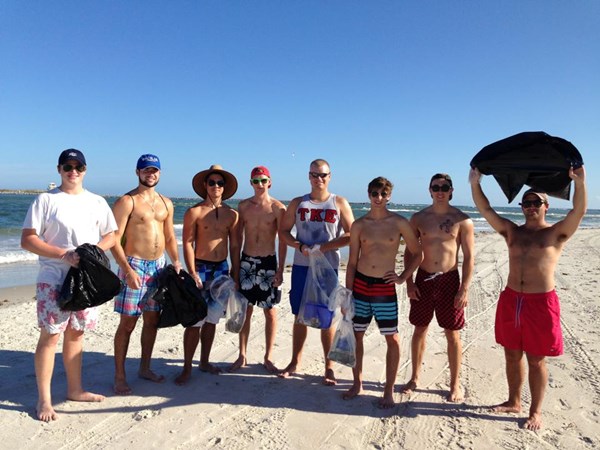 The Boys Are Back in Town

After a semester of re-focusing their intentions on school, community, and brotherhood, TKE has been reinstated as a fraternity on Rollins campus.

When The Sandspur reported on Tau Kappa Epsilon (TKE) last semester, it was to tell the story of a fraternity on the verge of disappearing.  Upon eviction from their on-campus house, Pugsley Hall, the boys found themselves faced with a choice: do everything in their power to restore their reputation, or stop being one of the five recognized fraternities at Rollins College.  With the students and faculty of our community looking over their shoulders, scrutinizing the evidence of their full 180-degree change, I am happy to report that the boys have recently been reinstated by the school.

Back in the fall when I spoke to Vice President Aaron Tanyhill, he told me what the boys planned to do in order to get back in the good graces of those they had offended.  The brothers’ downfall had been a series of violations pertaining to our community’s code of conduct, specifically concerning the under-age drinking policy.  The boys were determined to refocus their efforts as a responsible organization, revisit their constitutional bylaws, reorganize their executive board, and require more on-campus involvement for each member.  They wanted to make their educations a top priority.

In terms of responsibility, TKE took their sanctioning as a very serious wake-up call.  They held a meeting where all active members were present in order to have a lengthy discussion about where to go from rock bottom.  Ultimately, they were able to reach the unanimous consensus that saving the fraternity was a well worthy cause for sacrificing their time and putting in a strong effort.  In the week before the second semester of classes, the boys were informed that they had been reinstated as a recognized organization and would be awarded the opportunity to reapply to on-campus housing for Fall of 2014.

Mending minor problems within a fraternity may not sound like a long or difficult process to an outsider—but upon speaking with three active brothers in TKE, I learned enough about their grueling efforts to commend a job well done.

Eric, the twin brother of VP Aaron Tanyhill, told me that the boys had been placed on social probation.  This meant that every member would be held accountable for the actions of the general organization.  So they decided to focus their attention on reputable changes within their control.  Boys had been reviewed for their performances in class, and if their grades did not meet a certain standard, a board of brothers (called the MQV— “like a community standards for a fraternity”) sanctioned them with a certain number of required hours spent inside Olin Library.  The end result was a higher cumulative GPA for the brothers of TKE.

Additionally, TKE boys could be spotted all around campus picking up the litter that tainted Rollins’ notably aesthetic campus.  Approximately ten active members have joined our Eco-Rollins club in order to pay their dues and service to the community.  One class of 2015 member, Joaquin Quiros, reported serving a total of about 90 hours between Eco-Rollins efforts, volunteer work, and a long weekend immersion trip to Miami.  An international brother, nicknamed “Frenchie,” told me about the stress and anxiety he experienced coming from the extra pressure to perform positively in the academic arena.  I asked Eric, Joaquin, and Frenchie if the brothers were ever afraid that they would not be able to do enough to get their house back, to which they responded: “everyone was scared, every day”.

After recently hosting re-elections for various internal jobs and positions, the TKE guys are certain that they have done what it takes to rise above our college’s level of expectation for Greek life affiliates.  After speaking with the boys on both occasions, their fall from glory and subsequent resurrection, I can competently report a visible transformation in TKE’s approach to brotherhood.  In times of trouble, they banded together to overcome the consequences.  They never threw in the towel or decided their house was not worth the effort of earning back.  When their alumni turned a cold shoulder upon hearing the news that the house had been taken away, they stepped up to the plate and got back into their inactive brothers’ favor once more.  Today, the brothers of TKE expel a sigh of relief as they move toward a promising future of welcomed membership within our Rollins Community.

I, for one, as a non-brother, am relieved to hear that the fraternity will no longer be hanging their heads as they walk past their previous on-campus headquarters.  College, after all, is a time for self-improvement, re-evaluation, and general character growth.  We can all proudly view TKE’s experience as an example of strong work ethic and friendship reaping success as the brothers smile in anticipation of move-in day this coming August.

April 4, 2013:  After a slow sanction process, both TKE and KKG were put on summary suspension. TKE was guilty of violations of alcohol and recruitment policies, while KKG did not disclose the information regarding their charges. Both organizations could not meet unless they registered an event with the school and were not allowed to participate in any social or philanthropic activities. In addition to their sanctions, each organization did not have their respective on campus houses for the upcoming academic year. Both TKE and KKG made serious plans to make amends with the school. However they believed the school underestimated the importance of their houses to their Greek organizations.

Sept. 5, 2013:  Following an unsuccessful appeal process, TKE planned to make strides to get their house back. Changes included reorganizing their executive board and a focus on campus involvement. Given they meet the criteria, Abby Prokop of Res Life also hoped to see the boys return to campus. Despite these efforts, questions remained regarding the occupancy of Pugsley Hall—which is currently used as housing for students unaffiliated with TKE.  Staff reporter Kyle McCoy investigated overcrowding at Rollins and reported 94% on-campus occupancy—a number that affects the use of on-campus dormitories.