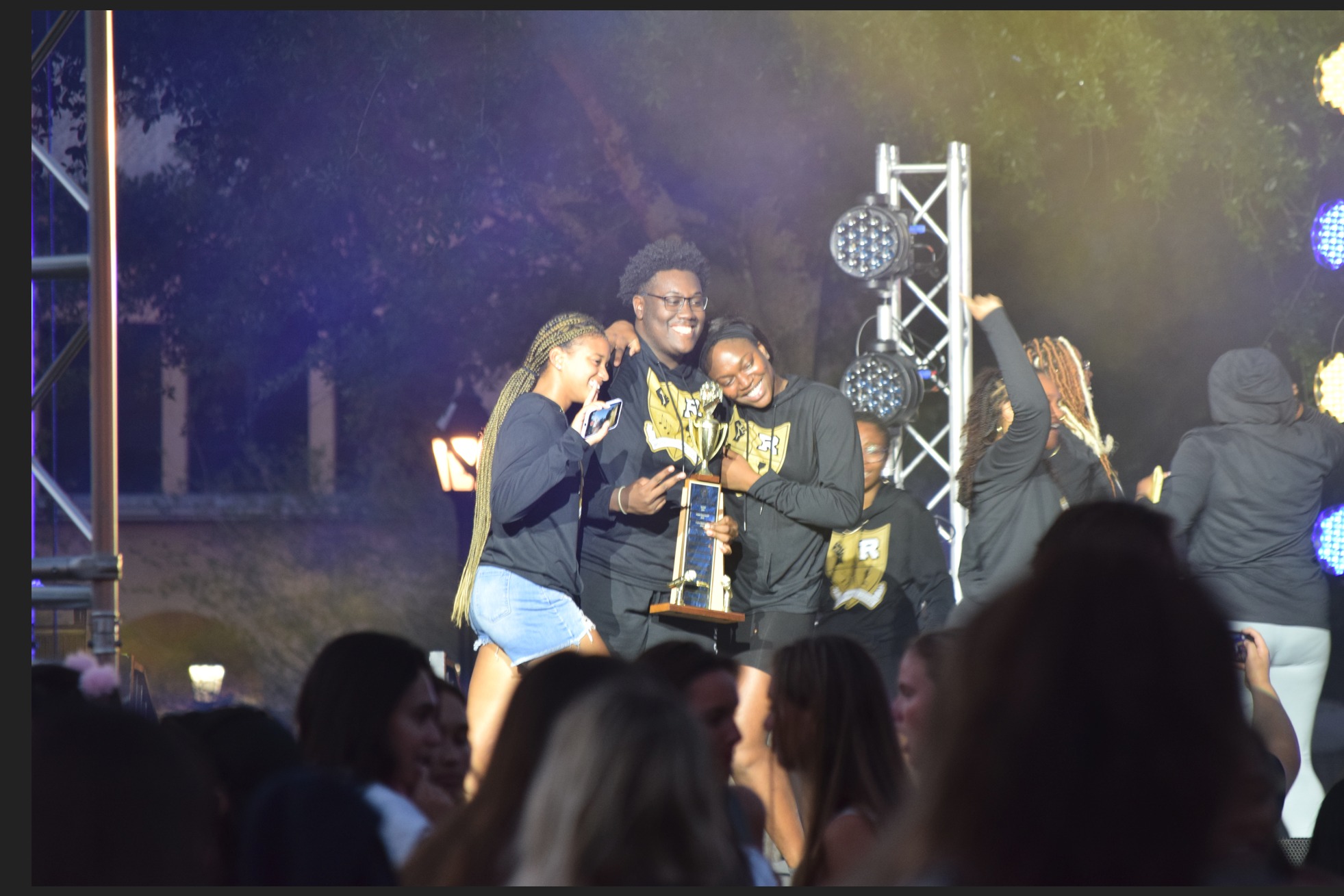 The air buzzed with chatter as students set up their blankets and chairs in scattered clumps on Mills Lawn. A professional stage, not even 48 hours old, stood in front of the crowd, adorned with lights, speakers, and fog machines.

For the first time in two years, the Lip Sync Tournament was held on March 22 at 6:30 p.m. It marked one of the first large-scale events on campus since the start of COVID-19.

The event was organized by the Student Government Association (SGA) in collaboration with the Center for Inclusion and Campus Involvement (CICI). SGA Events Chair Ingrid Ryan (‘24) was in charge of coordinating the event.

“I love that [Lip Sync] was outside and it was accessible for everybody and went along with COVID safety guidelines,” Ryan said. She added that “it was awesome to see the whole Rollins community together,” noting the difference from her experience as a freshman last year.

While a majority of the competing teams this year were organizations associated with Fraternity and Sorority Life (FSL), the competition was won by the only non-FSL group participating – the Black Student Union (BSU). This marks the second victory in a row for the organization, who also won the last lip sync in 2020.

“It was an honor to host this wonderful event with my colleague Liam,” Lilleslatten said. “I first heard about Lip Sync from my sister, an alumna of Rollins. She always said it was one of the most entertaining events of her college experience, and it definitely lived up to its reputation this year. Getting to see all of the talented organizations give their all in their dance performances for Lip Sync was energizing and inspiring to be a part of.”

“This is probably the first event on campus that I have felt there is a true Rollins community, and the fact that I had such an intimate relationship with this event, that I saw each performance from a perspective that nobody else saw, was something that I don’t think I’ll ever forget during my Rollins experience,” King said.

The judges for the competition included Professor Victoria Brown from the English Department, Dr. David Painter from the Communications Department, and Assistant Director of the Center for Leadership and Community Engagement (CLCE) Victoria Teske.

“[It was] super exciting and everyone was really happy and it was so much fun,” Teske said.

BSU’s group of 20 students celebrated on stage with their coveted trophy. In an Instagram post, BSU stated that it “wants to thank all of our members who participated and everyone who supported us.”

During the halfway point of the competition, Mitchell (‘23) and Vice President-elect Sendy Sejourne (‘23) spoke to the audience about their plans for their administration. They thanked students for voting them into office and reemphasized their dedication to the promise made in their campaign statement, “Breaking barriers and building the future.”

After the competition, Sejourne said that BSU’s victory “just shows the power of the Mitchell and Sejourne administration […] Black people have prevailed. We are resilient, we are beautiful, we are talented, and so multifaceted at that.”

“Congrats to every group who competed, I think everyone did amazing. But you saw who won,” Sejourne added with a laugh.

After the tournament, SGA sent out an email congratulating BSU for their victory, as well as announcing the second and third place winners: the sororities Kappa Delta and Non Compis Mentis, respectively.

In the email, SGA said it would like to thank Ryan for helping to “orchestrate this magic,” as well as CICI for the “guidance, time, and energy” that was required to pull off this “huge, annual event.”