How we can still save the Great Barrier Reef 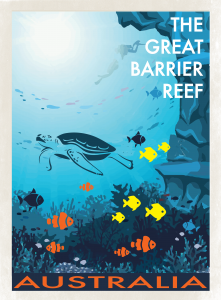 Twitter, Facebook, and Instagram alike spread the news like wildfire, with many people taking the article at face value.Social media users have continued to grieve for what they thought humanity had done to this historical ocean monument. The article expert opinions, further causing exaggeration to be spread and society to be partially uninformed.

Like many coral reefs around the world, the Great Barrier Reef is in serious trouble, but it is not completely dead—yet. As the world’s largest coral reef system, it covers more than 300,000 square kilometers and consists of more than 3,000 reefs, 600 islands, and 300 coral cays. Coral reefs are home to some of the most biodiverse environments, living through symbiotic relationships with small zooxanthellae amongst the coral polyps. Through photosynthesis, the zooxanthellae provide the coral reefs with energy, but they are extremely sensitive to changes in salinity, temperature, and sunlight availability, which humans have become experts at tampering with.

Rising global temperatures cause the corals to eject the zooxanthellae that provide them with nutrients, resulting in what is known as coral bleaching. Healthy corals range in colors from pinks and oranges to purples and blues, but once they have died and undergone bleaching, they turn white and brown. Reef fish and other organisms abandon the bleached areas, leaving behind a depressing, cemetery-like sight for divers and scientists.

Detrimental habits have taken their toll on coral reefs, with 93% of the Great Barrier Reef  affected by coral bleaching; however, there is still time to make a change.

Outside’s article stated, “No one knows if a serious effort could have saved the reef, but it is clear that no such effort was made.” By convincing the public that the reef is already hopelessly dead, society will continue their negative activities assuming no more efforts can be made to save the reef. But there is still hope: we can help the reef recover. In fact, large sections of the southern half of the reef were able to bounce back from the 2016 bleaching. The message being sent about the situation should explain what humanity can do to save beautiful places like the GBR, not accept its death and completely give up.

There is nothing more incredible than immersing your body into a sea of butterfly fish who accept you into their school, making you feel a part of something bigger. The numbers of colors within a coral reef is overwhelming; from the orange and black stripes on a clownfish passing by your mask to the shimmering surrounding waters as the sun breaks through the surface, every color compliments the other. If we continue to diminish their lifespans at the current rate, the next generation will be lucky to see the last dying scraps of these calcium structures.

Now that humanity has proven to care for the reef through their grievances towards its obituary, they have no excuse but to recognize their consequences and make a change. Ride your bike more, carpool places, and take public transportation; vehicles are the number one cause of carbon dioxide emission into the Earth’s atmosphere. By making a small change in your everyday lifestyle, you may end up prolonging the lives of our Earth’s most natural beauties, like the Great Barrier Reef.