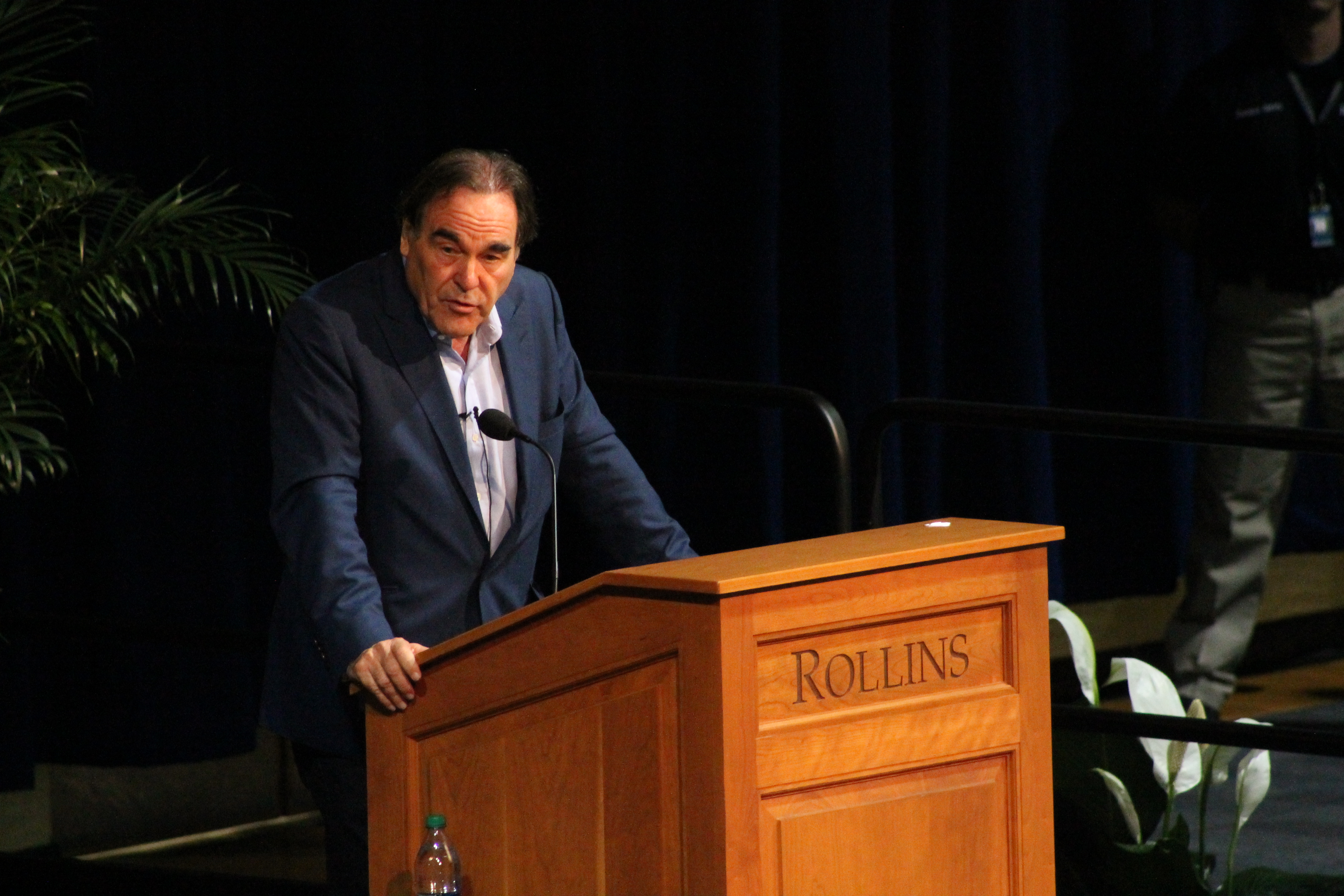 “Don’t Sell Yourself Out”

Last Thursday, the Winter Park Institute and Rollins College welcomed famed Academy Award-winning director Oliver Stone to speak in the Alfond Sports Center last Thursday. As the final speaker of the year, his talk was much anticipated, as the gym was filled to high capacity with students, faculty, and members of the Winter Park and greater Orlando community in attendance.

Before being brought onto stage, trailers for past films he had directed were shown on rotation and a special surprise was revealed to the audience: two of the speakers for the Winter Park Institutes’ 2013- 2014 season, astrophysicist Neil Degrasse Tyson and documentary director Ken Burns.
Finally, Gail Sinclair, head of the WPI, came out and gave a short introduction of the night’s event and introduced Professor Thomas Ouellette of the Theatre Department as the host for the night’s event. He gave a more at length introduction of Stone’s work, talking about how the director’s work impacted his life, saying that his films “challenged” and “excited” him for decades. He talked of Oliver Stone’s career from his experiences as a soldier in the Vietnam War, writing and finally directing his first films, and how he has displayed “no signs of slowing down.”

Oliver Stone was then introduced to a round of thunderous applause. He started off by saying how he would have told his life story in the opposite manner, believing “the beginning is in the end.” He hit upon many subjects during his brief opening speech, such discussing his thoughts on the president films he directed (JFK, Nixon, and W.), commenting that while W. and Nixon were “two [of the] greatest psychopaths,” he jokingly wished he had time to have made a film on Lyndon B. Johnson. He talked about how his experience in Vietnam affected much of his earlier filmmaking, such as films like Born on the Fourth of July, Platoon, and Heaven and Earth. Yet to Stone, it was the making of Salvador, the story of American journalist Richard Boyle, who covers the Salvadoran civil war and becomes entangled with both leftist guerrillas and the right wing military, which really got him started. Seeing what was being done to the Salvadorians, who were not like the communist Vietnamese Americans back home we were told to fear, but in fact democratic like us, was a jarring experience for Stone.

After his speech, Professor Ouellette revealed the format of the event would be a little different than usual, and introduced Kevin Crosby ’13 as his co-host. The rest of the event was a Q&A between questions asked by Ouellette and Crosby and questions asked a select group of pre-chosen Rollins College students. Some of the questions referred to the hierarchy of Hollywood and how up-and-coming students could get into the industry. Stone stated “I tell you, it’s all about power” and while it can be a difficult industry he told students that “hopefully your sensitive side… your soul will still stay intact with power.” He compares going to the movies as “a religious experience” and believes it should be a “violation of human rights” to watch a movie like 2001: A Space Odyssey on a tablet. He also talked about how he felt that films where violence is glorified does no good and has always made films where the violence was realistic, but not extravagant. He criticized the “war propaganda” films that have been made over the years, like Black Hawk Down and Pearl Harbor and has never received assistance from the Department of Defense in order to make any of his films. Stone bemoans the fascination with YouTube and does not consider it “film,” and all he hopes for is that “my films… last and remain in people’s memory.” Near the end of his time, he gave more advice to those wanting to get into the film industry: “Just fight. You gotta go in and you have to be fresh. Get noticed. Don’t sell yourself out.”

Oliver Stone’s speech and Q&A was the quintessential end to what has been an exciting and thought provoking season for the Winter Park Institute.
And by the looks of next year’s lineup already announced, it seems like Rollins will be in for quite a treat!