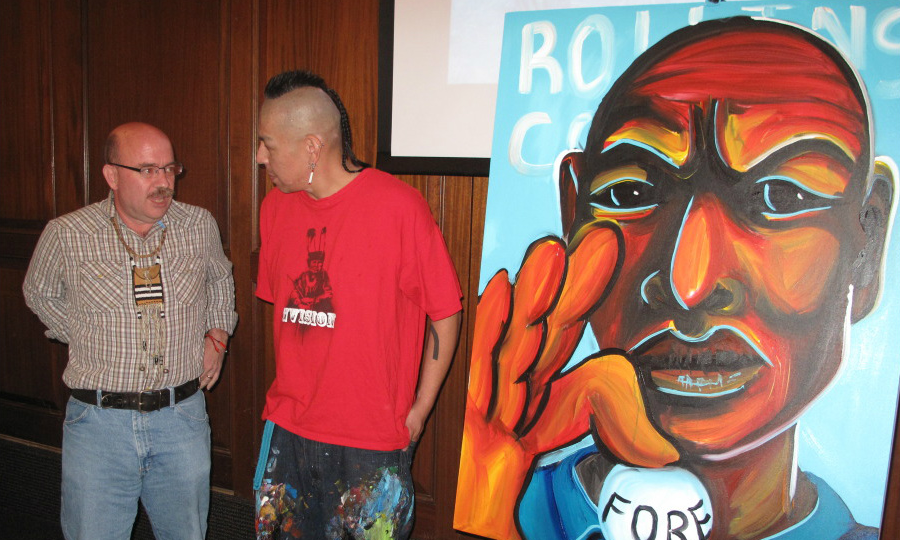 Not all live performance art consists of “someone in tights throwing flower petals around.” Native American artist and activist Bunky Echo-Hawk proved this during his visit to Rollins. While here, he was sure to debunk many of the stereotypes surrounding activism, being a starving artist, and the idea that Native Americans are a people of the past. Identified as a ProACTIVE ARTist, Thomas P. Johnson Distinguished Visiting Artist Echo-Hawk combines his heritage (Pawnee and Yakama Indian) and traditional values with lifestyle and media imagery to create art that has substance and meaning. Due to the combined efforts of the Office of Multicultural Affairs (OMA), Cornell Fine Arts Museum (CFAM), Diversity Advisory Council and the Critical Media and Cultural Studies department, the last days of February were devoted to Echo-Hawk showcasing his socially relevant works, and ending his visit with a live art demonstration.

An acclaimed and established artist, photographer, poet, graphic artist, traditional singer, and self-proclaimed nerd, Echo-Hawk graduated from The Institute of American Indian Arts and joined the workforce through varied jobs, from t-shirt screen printing to corporate work. He would eventually resign in 2006 in order to cofound NVision, a nonprofit collective of Native American artists, musicians and professionals that focuses on Native American youth empowerment through multimedia arts and the broadcasting of self-made public service announcements. When not exhibiting internationally or designing for Nike, he creates live works of art for auction, the proceeds from which benefit local organizations.

On Tuesday Feb. 28, Echo-Hawk gave a lecture in CFAM about the works he’s done over the years, illustrating how art can be utilized to impart a message about societal tensions that exist between any established groups of people. He mentioned that, contrary to popular belief, people – Native people, in this instance – are still affected by historical traumas such as the struggle for land, cultural losses and appropriation, and language restrictions resulting in the low numbers of Native Americans able to speak their indigenous languages. A clear image of his goal as an activist came to light through these stories. Echo-Hawk works for the betterment of Native people so that they may thrive (versus just surviving) in their own cultures as well as in the mainstream. Among the pieces showcased, he highlighted several from his collection Weapons of Mass Media, which challenges perceptions of pop culture icons. One piece in particular that drew chuckles and nods of understanding was a painting of Yoda wearing a traditional Indian headdress entitled “If Yoda Was An Indian, He’d Be Chief”; it challenges attitudes that the Indian cannot be the “good guy,” and draws similarities between the two. Another piece from the series Gas Mask As Medicine features various people and animals with gas masks covering their faces. Inspired by sickness caused by radiation leaking from nuclear plants into Indian land, the series provides startling social commentary, highlighting the continued trauma from historical events. Echo-Hawk takes care to mention that his works are not about victimhood but about uplifting, that the art has to say something. He said, “I don’t mess around and paint flowers, other people can do that. You can paint beads and feathers and the defeated Indian at sunset but that doesn’t change anything. Even if it’s just for two seconds you can change someone’s perspective.”