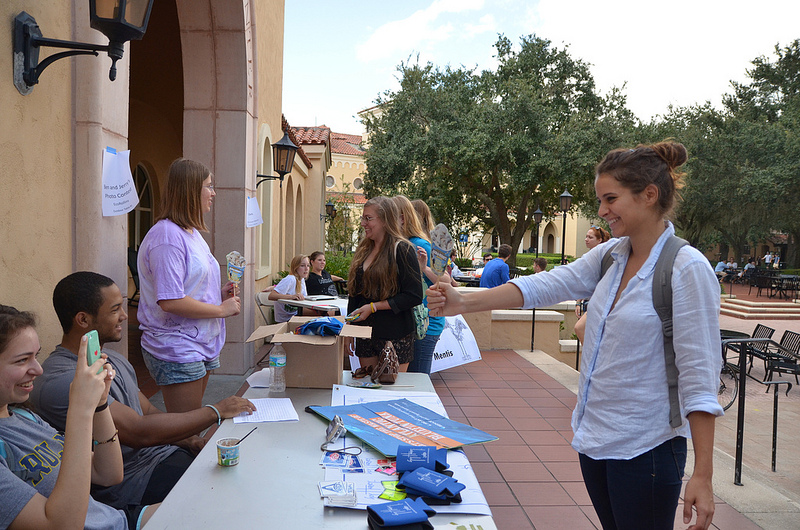 EcoRollins set up table for the Late Night Snack Photo Contest last week outside the Cornell Campus Center. Members of the club volunteered to table the campaign and take photos of passerbys as students made their way to satisfy their food cravings. All of the photos taken are available for viewing on the Eco-Rollins Facebook page.

Ben & Jerry’s along with Fair Trade colleges and universities used the Late Night Snack Photo Contest to promote their partnership. The contest was open from the 16th through the 27th and only available to Fair Trade colleges and universities. The rules are as follows: the photos must be submitted within the time frame, the students in the pictures must be eating ice cream or holding the Late Night Snack cut-out, photos must be posted to a social media (Facebook, Twitter, Instagram, Tumblr) with the tag #FTSnack as well as Fair Trade Campaigns, and the caption of the photos should be the Campaign name. The winners will be announced by October 1; the Grand prize includes a year’s worth of Ben & Jerry’s for your campaign’s events while the second and third place winners will receive prize packs from Ben & Jerry’s. There is also a contest within the contest for the most unique photo in which three photos will be selected for a ‘like’ contest on Facebook; the winner will receive a Skype session with a Fair Trade Farmer.

Not only were the members campaigning for the Contest but they were also trying to gain support for the Blue Fin Tuna by way of a photo petition through the PEW Charitable Funds. Overfishing has caused a 70 percent decline in the bluefin population over the last forty years. The 2010 BP oil spill in the Gulf of Mexico devastated the population even further when between 10 and 20 percent of juvenile bluefin tuna were killed. And yet they are continually being overfished because the International Union for Conservation of Nature listed the Pacific bluefin tuna as of “least concern” on the basis of inadequate information before the January 2013 assessment. The members of the National Marine Fisheries Service are working towards listing the Atlantic bluefin tuna under the Endangered Species Act by first investigating the effects of the oil spill on the tuna.

EcoRollins set a goal of 100 photos for the petition and easily surpassed their goal with more than 130 photos. If you missed the petition but are interested in supporting the bluefin tuna there are still a myriad of ways you can help. You can refrain from consuming bluefin tuna as well as cease to support restaurants that sell bluefin. Be sure to ask in the event that the type of tuna is absent. Remarkably, many restaurants and companies have agreed not to sell or buy bluefin tuna. You can raise awareness to friends and family and dissuade them from consuming bluefin. Ultimately, keep yourself informed on the progress of the National Marine Fisheries Service and other services who are trying to protect the bluefin tuna.