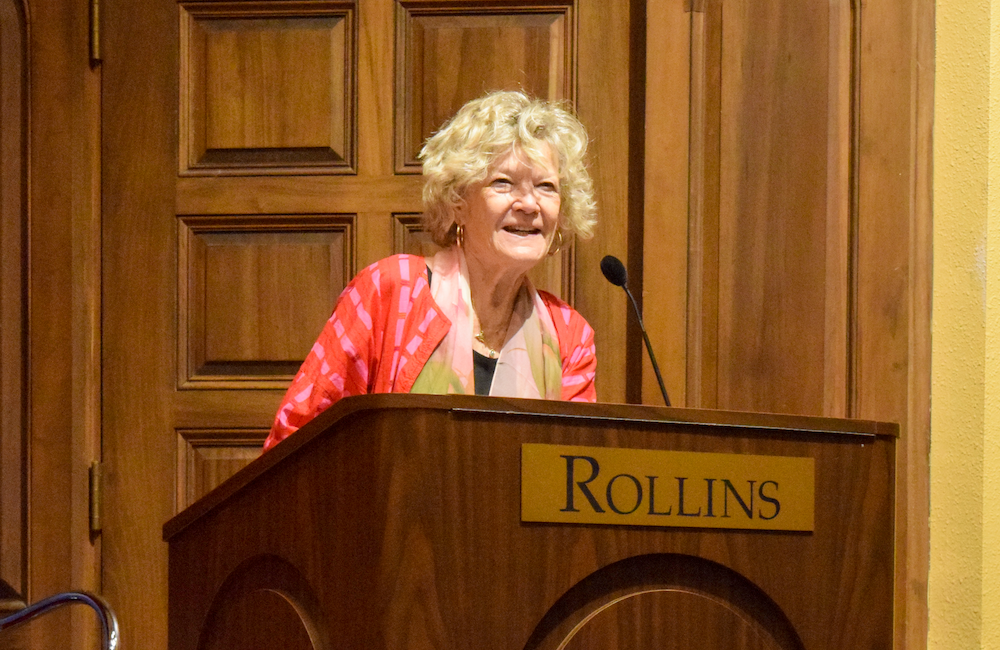 Esteemed poet retires, signs off from Winter with the Writers

After 14 years as a professor of English and director of Winter with the Writers at Rollins, Carol Frost is retiring. An event held on March 23 honored her career, featuring a reading of her works and farewell wishes by fellow professors.

According to Victoria Brown, associate professor of English and one of the event’s organizers, Frost’s legacy will remain in how “she brokered the affiliation between Rollins and the NBF [the National Book Foundation, host of the National Book Awards], ensuring the best writers working and being recognized today came to our annual Winter with the Writers festival.”

Winter with the Writers began in 1927 as Rollins’s annual literary arts event.

During her career of over 43 years, Frost has published over 13 books of poetry, received two fellowships, and won four Pushcart prizes.

“Carol’s tenure marked a golden period for contemporary literature on campus,” Brown said. “On several occasions, Carol took students to New York for the [National Book] Awards. That’s a special treat for anyone interested in literature, and particularly for a student writer just starting out.”

“A legacy is not for me to leave but for others to perceive,” said Frost, expressing that she “enjoyed [her] students most of all––their fresh views and in some of them a deep desire to learn.”

“The story of my time at Rollins will reflect for what and how people remember me, and for some, perhaps, in any stories of my solo travels to view art: an accidental meeting with Salvador Dali, and travels in the natural world, giving me perceptions of strange beauty in the death of a Ridley Kemp turtle, kayaking in the dark––all the things that flavor my writing and all the things I brought back to my students,” Frost said.

Frost said she hopes that “people remember Winter with the Writers during [her] directorship for the quality of the work and the rich diversity of the slate of our invited guests over fourteen years.”

For Frost, directing the festival was an educational experience.

“While I knew by reputation or personally many of the writers who came to [the event]––and I know a lot of writers––I began looking for authors and books outside of my ken, largely to bring to the audience a wider sense of what literature was, what it says and how writers say it.”

Winter with the Writers was cut from Rollins’s budget due to COVID-19. As such, Rollins lost its relationship with the National Book Foundation, but Frost “hopes that the English department will continue to support contemporary American writing, which in translations to English includes literatures from every continent”

“Should the college decide to recommit to a celebration for the best literature in America, we may gain back our place at one of the most prominent literary tables in the country,” Frost said. “I will be glad to help.”

Frost said she imagines her future involvement with Rollins after retirement as essentially advisory, saying she will be “prepared to offer suggestions about possible literary guests in all literary genres to the English Department, though [she is] guessing that Drs. Aggarwal, Brown, and Forsythe can easily find their own slates of writers each semester all on their own.”

Frost also expressed her interest to “act as a conduit between students looking for a literary experience beyond Rollins and the Florida State Poets Association [of which she is a chancellor].”

“There might be a way to formalize this sort of opportunity by offering a working scholarship to a talented poet to attend one of the Association’s biannual three-day conferences,” Frost said.

In looking towards the future, Frost said that she “plans to write and to read and to travel, destinations unknown in all activities, which is what makes them both so thrilling.” She also hopes to pursue gardening, commenting that she “may put in a small olive orchard outback.”

For Frost, the key to fulfillment lies in “being able to fashion a life doing what one loves.”

Mohammed Forero Bucheli is a Peruvian international student at the Master's program of Liberal Studies. When not writing, he can be found doing photography and design.