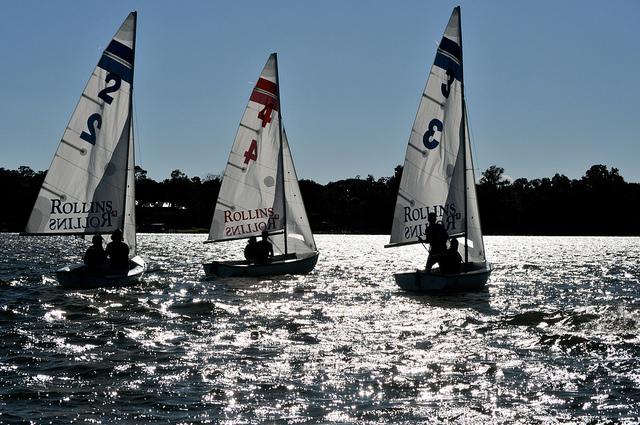 1. Coach Dave Herbster (‘80) is a fresh face with a passion for sailing and may be the Tar’s ticket to winning competitive regattas.

Rollins alumnus Dave Herbster has taken over the sailing team after the retirement of coach Harry Smith. Elsewhere, Herbster has coached lacrosse, soccer, softball, and baseball before becoming head coach for the Tars.

He also previously worked for the Florida Department of Environmental Protection. As a student at Rollins, Herbster earned degrees in Business Administration and Environmental Studies.

From growing up on the Chesapeake Bay, Herbster is more than familiar with water and boat safety. When asked why he chose to start sailing, he mentioned his favorite quote from Kenneth Grahame’s, Wind in the Willows: “there is nothing—absolutely nothing—half so much worth doing as simply messing about in boats.”

2. Captains of the team, Nick Baker (‘20) and Teagan Walsh (‘20) are more than ready for success for Rollins Sailing.

After three years of watching the team slowly expand and transform, Baker and Walsh seem to have a grasp of what the team is about, as they have both been sailing for over 10 years. Herbster describes his co-captains as “ambassadors for the team and folks to come into something here for.”

When Baker was discussing his and Walsh’s time at Rollins, he said, “Since freshmen, we have been changing the team of how we see fit.” Walsh said that her sailing start was as simple as “picking up the slack for when there wasn’t a coach anymore.”

3. The team hopes to compete in the conference and improve statistics.

The Tars are part of the Intercollegiate Sailing Association, in which they compete in different regattas for the South Atlantic region. The women’s team placed ninth last week while sailing in their first competition in St. Petersburg, Fla.

“I see an upward trend,” Baker said, when asked about changes from last year. “Not everyone has experience, but that’s kind of what we wanted.”

One of the biggest goals for the team is to “increase the newcomer’s confidence and integrate them with the competitors,” said Herbster. “The only way you get 15 kids to come out and say ‘I want to be part of this,’ is if your existing group has good chemistry and [is] setting a good role.”

4. The sailor’s dynamic with Coach Herbster appears to be well adjusted and right on track.

“I’ve been very fortunate to have great mentors in my life, so I like to think I’m paying it forward,” Herbster said, with a smile on his face. “I chose this job for the chance to come back to my alma mater and for the challenge of coaching.”

The Tars are looking forward to what Herbster brings to the team with his passion for the sport.

As 15 new members have joined the 2018 sailing team, the Tars seem to be at capacity, which for many is surprising.

Only two years ago, Baker remembered having to sit out competitions and regattas because of too few sailors. With the additions to the team, Baker noticed that Rollins’ support has been significantly better this year, even though “a lot of students don’t know about sailing on campus,” he said. “That could change… I would love to see a sailing shirt in the bookstore.”

This Saturday, the team will be competing in the South Points Regatta at Jacksonville. Be sure to wish your fellow Tars good luck and show your support. For more information on the Rollins sailing team, visit rollinsports.com.