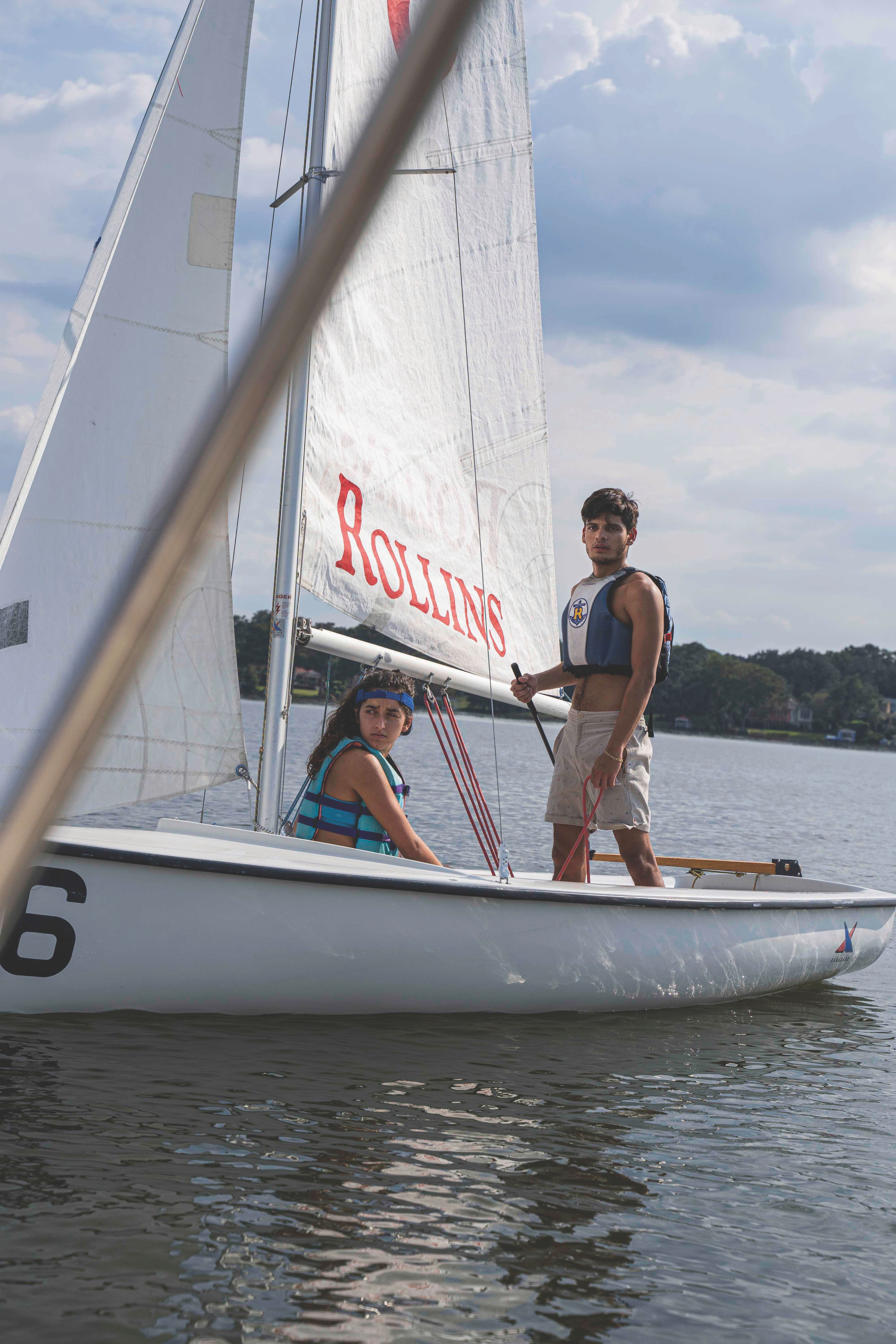 Sailing team off to a strong start in Georgia competition

Rollins Sailing rang in the new year with their first regattas, this past weekend. Between Georgia and Smyrna, the team split up to compete in two events and came back with impressive results.

For those unfamiliar, team racing involves a team of three boats facing three opposing boats. The ultimate goal is to have the team to finish with less than 10 points.

In order to gain an advantage, the Tars needed to use the technicals of sailing to slow down their opponents or prevent them from finishing the course. This kind of race requires communication, boat handling, and most importantly teamwork to achieve the common goal.

Rollins Sailing finished the day with twelve races and not a single loss. Taking home first and second place in the first race of the day, some of their sails came with hardships of their own.

In the following race, the capsize of an opposing boat, gave the squad a chance to battle for the win. And after suffering a broken tiller extension, the team was still able to finish in a winning combination. Undefeated in the day’s competition, the squad left with all smiles and praise.

“It was a great weekend of team racing for the Tars, we won every race on Saturday against Georgia Tech and UGA.” said Captain Nick Baker. “We also got to stop by the Atlanta Aquarium on Sunday.”

Closer to home, another contingent took their talents to New Smyrna Beach for some friendly competition.

On their morning walkabout, President Cornwell and his wife, Peg, had the opportunity to chat with fellow sailors, Brett Levine (‘23)  and Jack Dillard (‘21), before making their way to Indian River in New Smyrna.

The Smyrna friendly brought a rainy day and a steady wind, but the Tars were determined to persevere through the weather.

Rollins’ Sailing Team tackled the waves against five other Florida universities. Fortunately, the Tars led with a head start in almost every race all day long.

“This is what we’d hoped to see,” said Sailing Director, Dave Herbster. “Better starts are foundational to improving, and our sailors are making the team’s hard work payoff.”

Their head start advantage paid off at the finish line, as the team tallied up three second place on the day.

“The weather could have been better, but we came together as a team and we ended on a great note,” said Dillard. “We are all looking forward to the semester.”

Dillard and Levine led the team, with the latter (Levine) making his debut on Saturday’s competition. Alongside at crew were Fer Herrera (’20), Nico Ladino (’22), and Sutton MacInnes (’23), who also contributed to the strong performance by the Tars.

The Tars seem to continue their success after hosting and winning The Golden Bailer regatta back in early October.

They finished that regatta overall in first and third place, with all sailors stepping up. And though this team has been primarily student-led this season, the sailors are not the only ones to thank.

Their newest Head Sailing Coach, Ben Chafee, is looking forward to bringing them more triumphs. The Rhode Island native is new to Rollins this season and is already making a great impact on the team’s culture.

He is greatly appreciative of the contribution of former Head Coach and Sailing Director Dave Herbster, whose methods and coaching stood out in Saturday’s New Smyrna race.

A common theme emerged this weekend: regardless of the obstacles and weather circumstances, the Tars were able to focus on their goal of coming up on top.

The Tars will set sail next Saturday, February 8th. Again, the squad will split up into two for the weekend competitions. One team will travel to Galveston, Texas, to defend their 2019 title in the Harris Kempner Memorial.

On more familiar waters, another regatta will be held here on Lake Virginia, the Tars’ home turf.

They will be hosting ten schools that will include University of Florida, NC State, and Georgia Tech in the Old Florida regatta.

“The competition will be a lot tougher in these future events but this was an encouraging start to the sailing team’s new venture,” said Coach Ben Chafee.