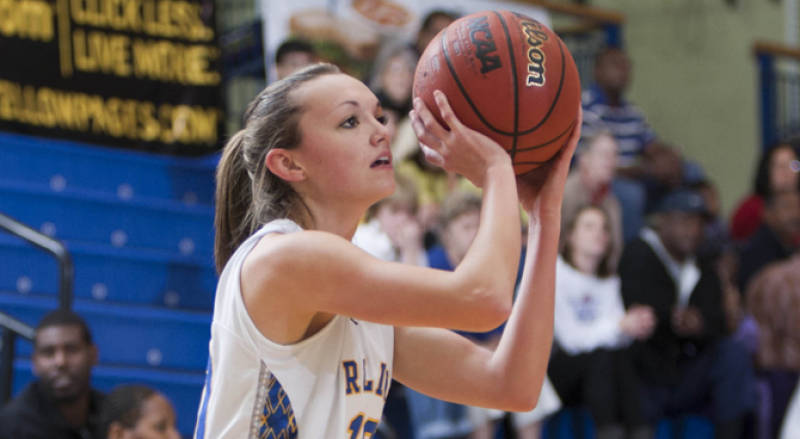 From Classroom to Court

At 20 years old and standing 5’10”, Sarah Blackburn ‘14 has already accomplished two outstanding seasons in her career on the Rollins women’s basketball team.

Starting with a break-out first year, Blackburn played in all 29 games last season while averaging 8.2 points per game. This not only put her on the Sunshine State Conference All-Freshman Team, but also earned her a spot on both the Rollins Athletic Director and Sunshine State Conference Honor Rolls. She maintains the trend this season as she continues to play as a guard, and she has set a personal best record, scoring 16 points in a game. But this outstanding leadership is not new for Blackburn.

She was a four-year letter winner and All-State honoree at Bishop Moore High School in Orlando, where she led the Hornets to the State Final Four all four years. She finished her senior year at the top, when she was named All-State, District Player of the Year and team MVP, and she ranked second in the Orlando Sentinel’s “Top Senior Girls’ Basketball Players of 2010.” These accomplishments led to her full athletic scholarship to play at Rollins today.

Blackburn’s love for basketball started at a young age. She began playing in kindergarten and was encouraged by her two older brothers, Kyle and Brian, who also play basketball. The Blackburn family, which enthusiastically supports the Orlando Magic and holds season tickets to the Magic games, even has an in-home practice basketball court in the garage.

Clearly, her family is a major support system for her basketball career. Her father was her first basketball coach and her mother continues to attend every one of Blackburn’s games, including away games. Blackburn said that the support of family and friends is what keeps her most motivated and playing her best.

Being on the women’s basketball team has changed her Rollins experience. She has learned how to manage her busy schedule as an elementary education major with two-hour practices six days a week. It has also helped her meet a great group of friends.

Whether it is going to dinner as a team or praying before a game together, she knows she can always count on them. Her favorite part of being on the team is the excitement of the game. She loves playing against Rollins rivals Florida Southern and Tampa, both of which the team has succeeded in beating.

The team’s current record for this season is 18-3, and Blackburn hopes to finish the season strongly. She is looking forward to the next two seasons of her career at Rollins and hopes to gain more support from students to come cheer on our women’s basketball team.