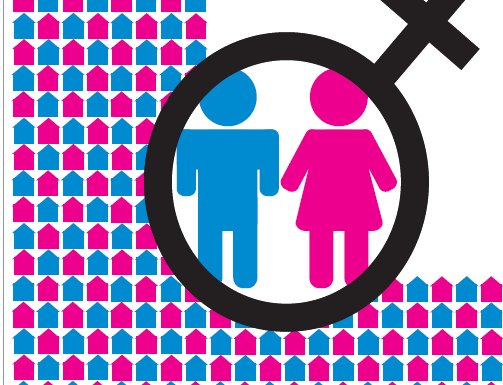 Under discussion and raising debate, the possibility for opposite sexes to room together at Sutton Place apartments may bridge the ever-decreasing gender gap.

[dropcap]T[/dropcap]he national collegiate trend toward gender neutral housing–an option allowing students to choose roommates regardless of sex-will sweep Rollins in fall 2013 provided the college passes the proposal due to appear early this spring. The proposal details an option
where students in the Sutton Apartments could opt to room with members of any gender. While political policy never seems able to take decisive action on the subject of LGBTQ rights, colleges are taking the lead in social change once again as many campuses continue to close the ever-decreasing gap between the sexes.

Gender neutral housing is only the latest stage of collegiate housing evolution that has brought members of the opposite sex ever closer since the introduction of co-ed dorms in the sixties. However, the introduction of gender neutral dorm rooms has actually encountered little public controversy. The option, now offered at well over 50 colleges and universities across the country, is normally designed as a response to LGBTQ activists calling for alternative housing options.

“For our students that identify as maybe gay, lesbian, bisexual or transgender, we’re seeing a national trend of colleges and universities offering this option so that they can feel safe and comfortable without having to choose… when their biology may say one thing but who they feel they are may be something different,” says Hayner. “The intent isn’t for romantic couples, but we’re not going to ask… why you’re wanting gender neutral housing.”

A trend that began mainly with small private colleges, gender neutral housing is now taking over at public universities like UC Berkely, University of Pennsylvania and University of Michigan. All Ivy League campuses also offer this type of housing. The growing number of participating colleges and universities offering gender neutral housing is largely thanks to the National Student Genderblind Campaign, an association founded in 2006 by student activists working toward broader gender equality.

Since the tragic and widely publicized suicide of Rutgers first year student Tyler Clementi, following roommate harassment in 2010, many colleges have embraced gender neutral housing options as a way to allow students of all genders and orientations to live and succeed in their most comfortable environment.

“I think when you’re choosing roommates, a lot of factors go into it—who you live well with, who you’re comfortable with having in your personal space. Some people want to room with someone of the same gender, some people don’t, and the college should respect that,” says Rachel Popkin, second-year student at Harvard University in The Harvard Crimson, February 2006.

Hayner agrees, “We have a few students that have requested it for a variety of reasons; you know, comfort level, those type of things…. the intent would be for people who feel like for whatever reason it’s going to be in their best interest to not have to have a roommate that is of the same sex.”

According to the Campaign’s website, “Our primary goal is to call attention to the fact that current policies are not only unnecessarily restrictive, but that they are also unjustly based on outdated assumptions about gender and sexuality.”

And many universities are responding. The movement, practically unheard of seven years ago, is becoming a national trend. However, according to a Philadelphia Inquirer article posted by Trish Wilson in May 2010, “removing gender restrictions in dorm rooms has also found wide appeal among heterosexual students, who are thinking about gender relations – and friendship – in new ways.”

Though some social conservatives have voiced worries about colleges pushing an agenda to break down all students’ preconceived notions of gender, students at large appear to be either in support or indifferent.

“I really don’t have an opinion,” says Kyle Bryan ’15, “The situation could end up good or bad just like regular dorms.”

A poll conducted by UCLA’s The Daily Bruin showed 49 percent viewed co-ed rooms as long overdue; 31 percent felt the lure of co-ed dorms may push people, particularly couples, into situations they aren’t ready for; five percent were undecided on the issue and 15 percent felt co-ed rooms would open the door to increased safety concerns or sexual assault.

“I’m sure one major holdup is that couples rooming together might fight,” says Jenifer Jokl ’14, “but not necessarily more than roommates. My boyfriend and I would probably sign up. You can ask any of his roommates, we pretty much live together already. Except that I can’t key in—that’s incredibly inconvenient.”

Hayner says about the worry surrounding romantic couples, “I understand that [worry] a little bit, and again that’s not the intent, but right now we have same sex couples who could choose to live together, and they could have the same issues, and we would deal with that through roommate contracts.”

“Really though,” he says, “I don’t see a lot of people using it for romantic reasons at the undergraduate level; most people still want to live with their friends.”

Though few actually elect to use the option, to many it’s simply about having the choice, being given the option to make your own mistakes and being free to live in whatever way you are most comfortable.