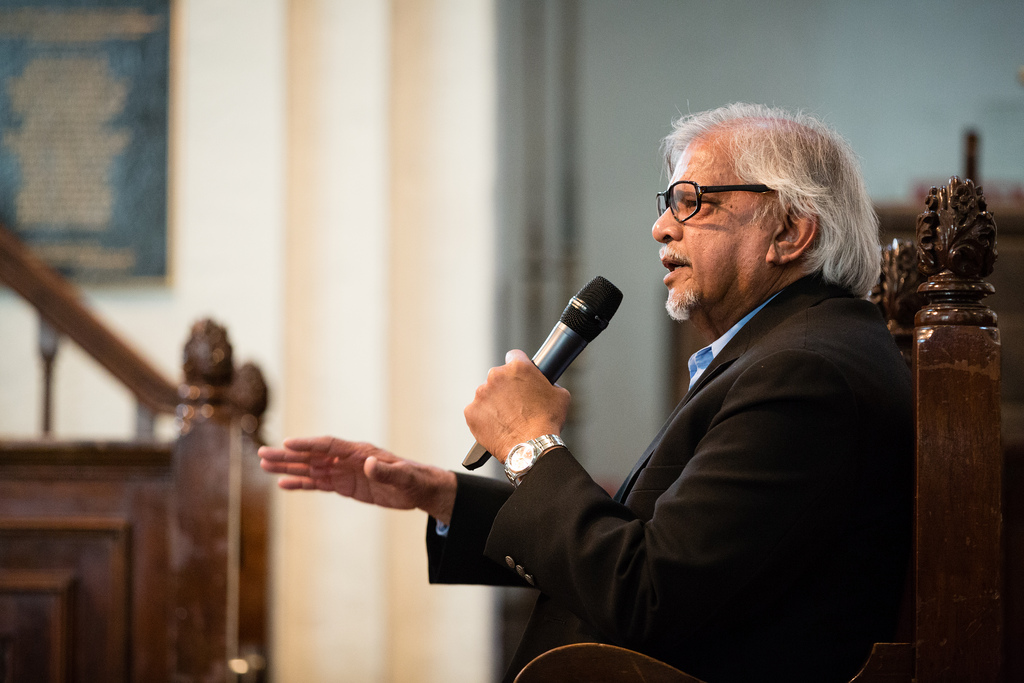 FAMILY WISDOM Arun Gandhi shares his views on current world conflicts with the public. The grandson of the legendary, Mahatma Gandhi, also advocated for a higher education centered on enlightenment rather than money income.

Sitting in the gorgeous Knowles Memorial Chapel just feet away from the incredible Arun Gandhi, grandson of legendary peace activist Mahatma Gandhi, made me realize just what an incredible institution Rollins is.

Arun Gandhi came to campus the night of October 2 (his grandfather’s birthday and International Day of Non-Violence) for an event sponsored by the Winter Park Institute. The chapel was filled to almost maximum capacity with Rollins students, staff, and local community members. It was a relief to hear that Gandhi would also be doing an hour-long Q&A the next afternoon exclusively for Rollins students. After an introduction by Rollins psychology professor Dr. Sharon Carnahan, Carnahan asked Gandhi questions that were submitted by students prior to the event, followed by some questions from the audience.

One question asked Gandhi about the current religious tension in some regions of the world, such as the Middle East. Gandhi answered that we tend to look at situations only when they become a crisis, such as after the Holocaust and 9/11, and “we react to crisis instead of doing the right thing.” He emphasized that we need to “reach out to all religions” and foster a “healthy dialogue” on interfaith communities.

Another question was directed at the current LGBT civil rights struggle in Russia, and how the protestors could overcome the violent Russian authorities with peace. Gandhi said that the protestors need to “anticipate [the] violence of the regime,” but to always remain nonviolent. “The moment we retaliate, we have lost the battle.” He also referenced his grandfather, who said that you should never look at people as enemies, but rather as “misguided friends.”

The conversation then drifted to the topic of gun control. “No other country makes it so easy to get a gun [than the United States],” Gandhi stated. He shared that before WWII, companies that made consumer goods temporarily made war materials, and then stopped after the war ended. However, after WWII the United States government created a whole sector for weapons of mass destruction. These industries now foster violence for profits.

One student in the audience asked Gandhi about the occurrence of “neo-colonialism”, where first world countries are taking advantage of other countries’ resources not through slavery, but capitalism. Gandhi answered that he believes that there is an inverted relationship between materialism and morality. He calls the stock market “the greatest evil in the world” and says, “Businesses were created to serve the people, not shareholders.”

When asked about the purposes of higher education, Gandhi said, “I am very unhappy [with the current state of higher education]. The education system has been transformed to what industry needs. The emphasis is always on finding a career and making money, not enlightenment. Education should help us understand ourselves and other humans. Enlightenment means expanding our vision and learning from each other. Education never ends, but only if you have an open mind.”

After hearing this statement, I thought about my own education at Rollins. I believe that Rollins does live up to its promise of providing a global liberal arts education for today’s world. Since I came to Rollins, my vision of the world has expanded. However, recently there has been some debate among the Rollins community over whether Rollins is straying away from this goal and promoting a more vocational approach. I only hope that Rollins’ dedication to the education of the soul as well as the mind continues long, and that liberal arts colleges as a whole do not become extinct in this country.Gandhi’s last words to the audience were, “I hope I have planted some seeds here… so we can all transform this world together.” There is not a question in my mind that everyone in those pews, including myself, left the chapel with a renewed energy for social justice and change.