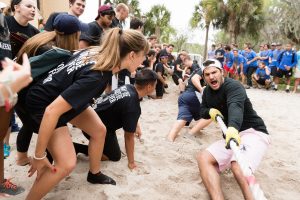 The time-honored tradition of Greek Week returned this past week, with all fraternities and sororities involved in what the Office of Fraternity and Sorority Life has dubbed FSL Unity Week. Events included a mixture of Greek Week staples like dodgeball and events designed around aligning the values of the FSL community with those of the college. This year’s events were especially aimed at uniting the FSL community in the wake of the recent fraternity suspension.

India Grant ’19, Vice President of Programs for the Rollins Panhellenic Association and member of Non Compis Mentis, noted the success of Unity Week.

“I felt like the events were a good start to bringing our community back together. While not all of them were centered around ‘fun,’ they each had a different way of uniting our organizations,” Grant said. She added, “My favorite event was Tug-o-War because it was extremely high energy; everyone got really into cheering for their team and their friends’ teams.”

For the first Greek Week event on Monday night, speaker David Stollman visited campus to discuss breaking stereotypes of Greek life and taking pride in being a member of the Greek community. Greek Week favorites dodgeball and tug-of-war returned on Tuesday and Wednesday, with festivities ending on Thursday evening with the annual Cook-Off. An ongoing event called the Bill Battle encouraged members to donate to charity by placing single dollar bills in their team’s box–or, alternatively, by placing higher bills in another team’s box to lower their score. All proceeds were donated to charity.

Juan Diego Medrano ’17, Secretary of Lambda Chi Alpha, felt that the theme of unity and the traditional Greek Week structure resulted in an odd combination. “I feel that Greek Week, this year, was deprived of its competitive essence,” Medrano said. “The events haven’t changed much since last year, but everyone’s energy lacks a certain edge because unity and competition tend not to mix well. That’s why dodgeball holds a special place in my heart; you can’t take the victory lust out of dodgeball.”

Medrano added, “FSL has certainly gone to great lengths to bring us the Greek community together, and we can’t ignore the intention there, but I do wonder if this only serves to remind us all of past difficulties during a week where we might want to move on instead.”

Unity Week may be over, but the FSL community is still working towards improvement. “The speaker we had on Monday, David Stollman, really hit the nail on the head when he identified one of our biggest issues as apathy,” Grant said. “If the general members of our organizations continue to be apathetic towards their own events and towards other organizations’ events then it will be impossible for us to maintain a strong community. We need to stick together and start caring about ourselves and each other.”

The Rollins Panhellenic Association holds open meetings in Bush 176 every Thursday from 12:30 to 1:30 p.m.