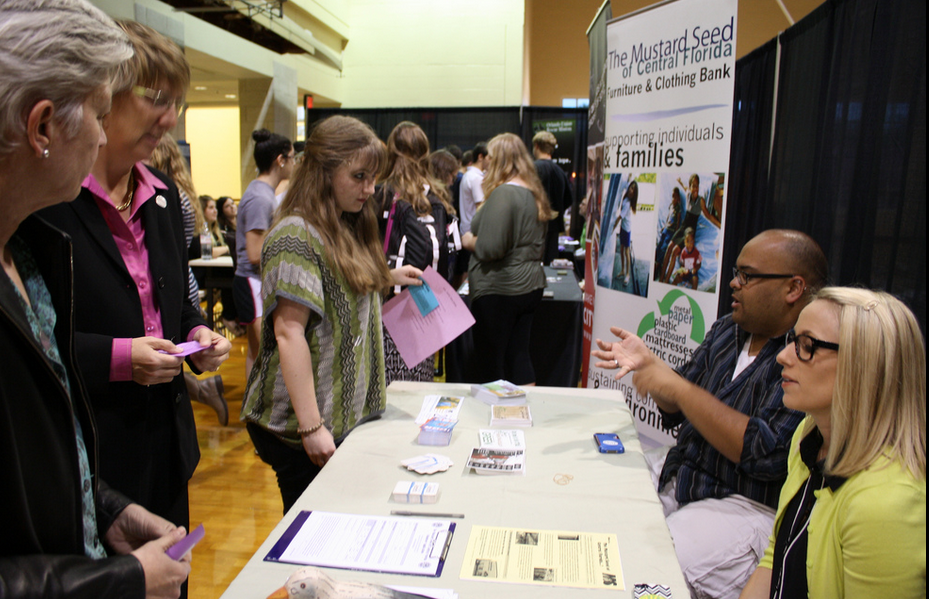 On Tuesday, April 1, Rollins Office of Community Engagement brought students together with their global communities by, ironically, dividing them. Not to be mistaken with The Hunger Games, the Hunger Banquet was an alternate reality, dividing its attendees into a lower, middle, or upper class, with corresponding  experiences.

I came in with a group of three friends from my Social Entrepreneurship class and one tag-along, and we were scattered amongst all three socioeconomic classes. I was spontaneously assigned to the lower class at check-in, resulting in a night characterized by impatient real estate agents and an impulsive desire to project social change onto others.

I took on the identity of ‘Pierre’ as delegated to me by a paper slip. The slip read as follows:  “I’m a forty-year-old man from Haiti who immigrated to the U.S. last year. I live with my son and his American wife. They were doing well until my son’s wife was diagnosed with breast cancer. The medical bills have become too much. We may lose the house soon.”

From here, I encountered an illegible and incomprehensible form at the “DMV” to illustrate the language barrier often afflicted upon lower-class members. When I was asking for an explanation, Rob Salmeron ‘14 overzealously confirmed that his industry could not help me, most likely due to my own incompetence.

I was delegated a job in construction at the “employment” booth, which did not give me ample room to improve my standing at all. All the while, I was watching members of the upper class purchase summer homes at the ‘housing’ booth.

Among all of these vendors, I was greeted with confusion, agitation, and indifference by the operators opposite me, yet observed a pleasant and accommodating system for those socially recognized as my “superiors.” I laughed it off as a simulation, but the message still held true that I was being treated unfairly because of the difficulty of my (Pierre’s) situation. Volunteer services, like Mustard Seed, were the most helpful in listening to my problems, giving me a plan of action, and trying to make a difference in my life instead of a profit. For those like Taylor White ‘16, in the middle class, the scenarios were far easier, but “nobody went out of their way for you like they did for those in the upper class.”

We, the lower class, ended the night with a dry PB&J, as we begrudgingly watched the upper class indulge on a three-course meal, which concluded with chocolate cake that could give a small, starving country diabetes.

One of our own made it into the middle class at age 10 by inheriting her father’s life insurance when he passed away. Another member of the upper class was dragged down to the lower class when his wife divorced him and he lost the profitability of his high-end car dealership. Within moments, we were clapping with the people joining us in the wallows of poverty, and applauding those who managed to find a way out. We formed an instantaneous camaraderie, and it was almost unsettling as much as endearing how fast we were identifying positively with a group that was causing us so much personal strife.

Joined by the Zebra Coalition, Mustard Seed, and City Year as local entities of social impact, we learned that 60 percent of the United States falls in the bracket considered “lower class,” and one in five Americans are struggling to meet their nutritional needs. The Hunger Banquet’s entry fees and canned foods were all returning to the community but not without having put into perspective the local and global phenomenon in which many have no choice. Background can play a huge inhibiting role in determining the pathway to opportunity. Though not impossible, navigating these obstacles is difficult, resulting in perpetual cycles of inequality, poverty, and hunger. As the night concluded, half of us left with full stomachs, but we all left filled with a deeper understanding of our own good will and a desire to showcase that to the world.