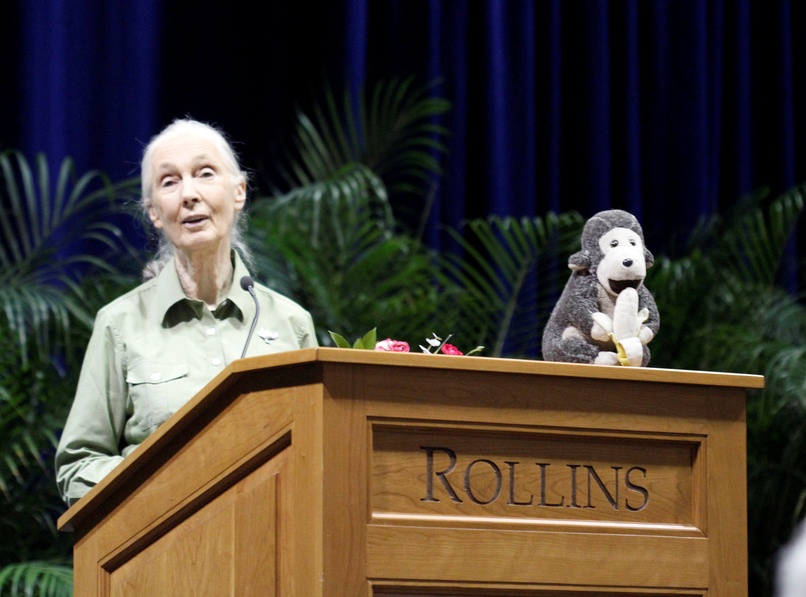 Rollins was the place to be April 19, when famed primatologist Jane Goodall came to give a talk on her life’s work with chimpanzees. Since Goodall is such a luminary in the field, it is no surprise that a buzz swept across campus for her. By the time organizers handed out tickets outside the Alfond Sports Center at about 5:30 p.m. for the 7:30 p.m. event, the line wrapped all the way around the gym, across the other side of the building and beyond. From University of Central Florida community members to those who flew from out of state to come see Goodall speak, all descended in front of the gym, hoping to get one of the limited number of tickets that would allow them access to the event.

While most people were waiting in line, others attended various Goodall-centered events. The festivities began at around 5:45 p.m. in front of the Mills building, where Goodall stood by President Lewis Duncan for the lowering of her stone into Rollins’ Walk of Fame. Only 15 minutes later, a special student-run discussion with Goodall was held in the Fred Stone Theatre. Honors students Christian Kebbel ’12, Colleen Wikowski ’15 and Bethany Eriksen ’15 were chosen to lead the discussion with Goodall with a full house in attendance. This special event was set up by Professor of History and head of the Honors Degree Program Barry Levis, and honors students were the first to be given access to the event, yet environmental studies majors and professors in similar fields were all presently crammed into the space.

The talk was not one’s typical Q&A, but instead became more of a dialogue between Goodall and the student panel, where they talked about their own personal struggles and successes in their environmental pursuits and asked the world renowned anthropologist her opinions on certain issues. One of the big issues mentioned in the roughly 30-minute discussion section was that of apathy, where Goodall discussed her personal observation of the issue, recounting the fact that over the many years she’s been around the world, she’s found many young people who were depressed, apathetic, angry and even violent over the fact that they believed they could do nothing. She said that she got frustrated with the “doom and gloom” message and the continual metaphor of the Earth soon becoming “shipwrecked” because of its decisions. This all led to the creation of her organization, Roots & Shoots, a global environmental and humanitarian youth program funded by the Jane Goodall Institute. Described on its website as having “a global network of tens of thousands of members in more than 120 countries,” the organization fosters youth, from pre-K through college, to take action and “to make the world a better place for people, animals and the environment.” Goodall summed up the point quite simply: “If we all give up hope, it will be hopeless.” She emphasized the importance of combatting indifference in her Fred Stone talk and stated that people must not believe that “science will fix everything,” but instead they should start changing the way they live to better the environment. Most importantly, she stated how important it is to have fun, for if you are not enjoying yourself in this pursuit, how can you expect others to enjoy it as well? Soon after, Goodall left the Fred Stone to get ready for her Alfond talk, yet not without taking a group photo with the audience and graciously spending the time to sign books for all those in attendance.

At about 7:30 p.m., Goodall arrived to give her hour-long talk on many of the topics mentioned in the honors discussion. After a lovely introduction by Executive Director of the Winter Park Institute Gail Sinclair, President Duncan, and Erin Wallace ‘93MBA, senior vice president of operations of Walt Disney World, Goodall talked about her life, growing up as a poor girl in England during the World War II, and her new Disney film Chimpanzee, which is currently in theaters. One of the most important things she emphasized throughout the course of her speech was that of the support of her mother and how that support helped get her to where she was today. Her words of encouragement spoke volumes that night. “If you really want something, work hard, and if you never give up, you’ll find a way,” she said.

The rest of the night’s speech was spent on various topics, including a more in-depth discussion on the work that Roots & Shoots does; her discoveries as a primatologist for 50 years; and the many issues facing our world, from deforestation, soil erosion and pollution, to the rapidly depleting chimpanzee population. In the end, even with everything seeming so daunting, she shared with the crowd her four main reasons for hope: the human brain, the indomitable human spirit, the resilience of nature and the determination of young people. With these four reasons, she still to this day believes that we can all make a difference. And with those words and a few others, she bid our college adieu… but not without staying until 11 p.m. to sign books for all those having waited in line to see her speak. Goodall made an indelible impact on this campus and those able to see her speak were given a once-in-a-lifetime opportunity they will not soon forget.

On April 19, Jane Goodall visited Rollins College. Look below for albums of different events of the evening.

At 5:45 p.m., a stone laying ceremony was performed at the Walk of Fame.

At 6 p.m., students in the Honors Program participated in a private discussion in the Fred Stone Theater on how students can make a difference and environmental impacts. Students that participated in the discussion panel are (left to right): Colleen Wilkowski ’15, Christian Kebbel ’12, and Bethany Eriksen ’15.

At 7:30 p.m., Jane Goodall spoke in the Alfond Sports Center to 2500 students, faculty, staff, community members, and visitors. She discussed environmental apathy and explained that things can change.