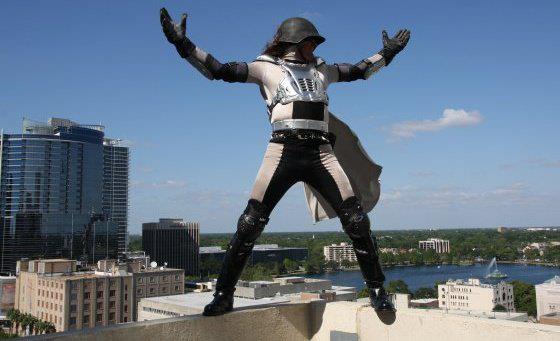 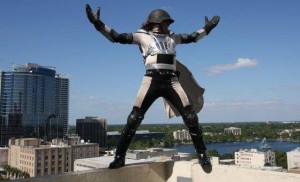 On any given Saturday night, Downtown Orlando is best characterized as a melting pot. Folks of all varieties barhop  between Washington and Church Street, and Wall Street, the party central of all Downtown streets. Wandering drunkards stumble on and off sidewalks, bumping and mumbling, asking for cigarettes. Shiny shoes and eccentric hairstyles make way. Street-side performers jam behind open guitar cases hoping for a buck. And the homeless find familiar nooks and crannies to make home for the night. Downtown is always a good time.

There’s a man who patrols this district. You may have heard of him. Downtown knows him well. His name is Master Legend and he is Orlando’s real-life superhero—secret identity and all.

If there is one thing you need to know about real-life superheroes, it is that they are people with a bone to pick. They are the ones who don a mask (or not), coin themselves a super name, and hit the streets of their respective cities to make a better place. “For a long time people laughed at me, but now they know who I am and what I’m doing. Now they respect me,” said Legend.

At 48 years old, Master Legend is hard to miss in his black combat helmet and half-faced mask. He wears modified soccer and motocross gear as make-do armor and has spray painted the pieces silver. He has protection on his arms, legs, and torso. His outfit is complete with a grey cape and grey and black tights. He is often armed with something like a green reusable Publix grocery bag full of granola bars.

As seen in the HBO documentary Superheroes, these super-civilians are sprouting up all over the country. Real-life superheroes come in a variety of forms, each with their own motives. While some confront criminals head on, others hit the streets with bags of toiletries and food for the homeless. Some do a bit of both. Legend, one of the first, has done it all. He claims to have been in countless fist fights, to have shut down numerous criminal actions (drug dealers, purse snatchers, bully thugs), to have been beaten bloody by the enemy—only to return for more the next night. He claims to have helped many people.

“I’ve always been a target. Back in my younger days I had asthma and was small, an easy target,” Legend said. “But the bullies didn’t realize the badly abused family I came from. I was already used to dealing with pain and suffering, so I put up a good fight.” Like many superheroes, Legend spawned from a dark past. His superhero backstory includes parents who were involved with the KKK and neglected and abused him, often by whipping his back bloody from shoulders to heels and forcing him to fist fight. This all went down in New Orleans many years before Orlando.

“Battling those bullies paid off in the long run, because then I walked the streets pretty much unafraid,” he said. “And when you can do that, one of the secrets is, the people that stay on the streets will have respect for you. I’m not out to rat on people. Word’s around and they know I’m out to help. That’s my main objective.”

As a middle-school boy with admiration for superheroes, Master Legend dedicated himself to “fighting off the evil in the world.” He had realized he could mask his identity from enemy bullies. But his fighting powers do not only come from sheer will and suit and armor. Legend is the only real-life superhero who claims to have actual superpowers. And he claims to have received such “metaphysical powers” from two deathly experiences.

The first experience was a fight for his life at birth. He was born with a veil (a thin membrane over the face) and nearly suffocated before he could take his first breath. “I had a chosen destiny,” he said. And he’s been fighting ever since. The second event occurred when he was 13 and adamantly searching for powers to combat his father. He went to the grave of Marie Laveau, a renowned Voodoo practitioner in New Orleans during the 19th century. “I made a wish on her grave for superpowers. To fight my evil daddy mainly is what it was. And that I wanted super powers.” He marked a hex on her grave (by drawing an X ) and tried to lift a car to determine if the Voodoo witch had given him powers. But nothing had changed, not until he found himself inside a nearby mausoleum and the iron-door entrance slammed shut. “I got trapped inside—the door shut but there was no wind.” In pitch black darkness he declared aloud, “If there’s a time for power, it is now, Marie Laveau!” And Legend kicked the iron door off its iron hinges with super strength.

With his new strength he defeated his father. By the time Legend was 16, his father drank himself to death and his mother emancipated him. His life on the streets began, and over the years he experienced firsthand the victimizing of the homeless. He made the move to Orlando about 20 years ago and is not satisfied with the conditions here either, especially when it comes to homeless veterans. “I’m always trying to bring awareness to homeless vets,” he said. “There shouldn’t be any excuses for homeless disabled veterans, people missing legs and arms.”

One Saturday night, I joined Master Legend on patrol, bag of granola bars in hand. It was maybe 30 seconds before we came across a homeless man on a stoop using his jacket as a blanket. As we approached, instincts glared in the man’s eyes—he wasn’t sure what this masked stranger and I were up to. Not until we handed him several granola bars. Then he seemed to almost cry.

We made a circuit covering everywhere between Amway and Lake Eola. People hungry, people dirty, people partying. Many times it became difficult to move down the street because many people wanted pictures. “A lot of this is about awareness,” Legend said. “People know what I’m doing is good. But they won’t come out here and do it themselves.”

Master Legend explained to me that, “just having something in their bellies helps the homeless sleep through the night,” which is true. But that night it was not food comforting them. That night I saw people eased into their street-side slumbers by the super-compassion of a man whose identity remains a secret.