Nonviolence in a violent world

Dr. Arun Gandhi has spoken to groups all over the world from Nicaragua and Brazil, to Ireland and Japan – and now, Florida.  On the evening of Wednesday, September 14th, Dr. Gandhi spoke out to a group of Rollins students and faculty at Knowles Chapel.  By the end of the hour, he was met with a standing ovation by an enthusiastic and appreciative audience.

A firm believer of nonviolence, Dr. Gandhi, believes that the nonviolence philosophy is a way of life, neither a tool nor a weapon:

“We need to make [this philosophy] a way of our lives.  It is something we all need to understand and learn to practice daily if we really want peace in the world.”

Sharing stories about Mahatma Gandhi, his grandfather, Dr. Arun Gandhi admitted that he had not always been naturally inclined towards non-violence and had, for a long time, experienced outright rage at the discrimination he experienced.  In fact, as a boy he was reckless and always willing to fight – that is, until he went to live with his grandfather as a young teenager.

“Anger can be crushed, but understanding, respect, and compassion cannot be crushed: that is the key to nonviolent action.  We may be nonviolent in our behavior, but even then anger exists within us.”  Mahatma Gandhi had encouraged his grandson to keep an anger journal, but such a journal should be used to reflect and come up with solutions, rather than rant. 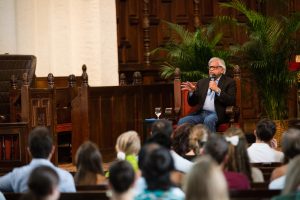 While we should never feel ashamed of our anger, we should learn to channel it.   As Gandhi told the audience, “Anger is a very strong emotion; we just need to learn to use it effectively.  Grandfather taught me the very powerful lesson of understanding anger: he said anger it is like electricity.  It can be powerful if we use it correctly, but it can be dangerous if we do not.  We must learn to channel our anger, so that we can use that anger for the good of humanity rather than use it destructively.  We can only dream of creating peace in our societies by creating peace within ourselves.”

Violence isn’t limited to the use of weapons, and we must all come to understand that.  “Whether you use stones or sticks against them, it’s all violent; the only way nonviolence can be used is through love, respect, and compassion.”  We tend to think of physical violence as the only means of true violence; however, as Gandhi points out: “There are hundreds of things we do that don’t require force, where we hurt people somewhere.  [This] can take place in form of political, social, religious, wasting of resources.”

Dr. Gandhi concluded, “I have come here today to give you the grain of wheat that I got from my grandfather, and I hope you won’t let it rot and perish.  [The knowledge of nonviolence] can allow all of us to transform this world and make it a better place, [by letting such knowledge reach] future generations.”

A question and answer session followed the “Nonviolence in a Violent World” lecture, and many good points were raised about how difficult it is for a nonviolent philosophy to be applied in a unperfect world.  However, the change that we want to see in the world begins with us.  “No one can oppress us more than we can oppress ourselves, my grandfather believed.  We are so attached to our way of life; we don’t want any of that to be disturbed, so we accept a lot of injustice and things because we don’t want disruption in our lives.  But, if we want to change that we have to be conscious that there is more to life.”

Dr. Arun Gandhi has spent the entire week on-campus attending several philosophy classes and answering upwards of seventy student questions in three days.  Along with philosophy professor Dr. McLaren, he will also be leading a group of Rollins students on a tour of India later this year, as part of a Winter Field Study.  There are still a few spots available on this trip for interested students.