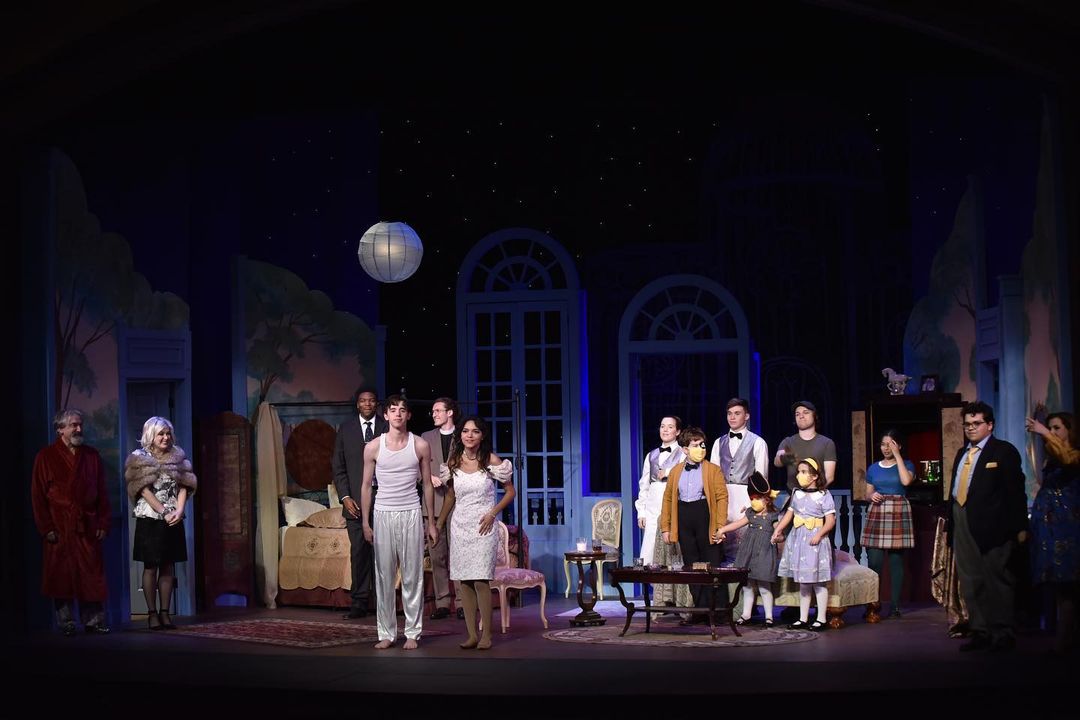 By Arabella Lilleslatten on February 26, 2022

The Annie Russell Theatre buzzed on Friday evening, as the audience arrived to watch Tennessee Williams’s Cat on a Hot Tin Roof, the first mainstage show of the semester. The 1955 Pulitzer Prize-winning drama was directed by Dr. Marianne DiQuattro, professor in the Department of Theatre & Dance.

Artist-in-residence and Professor of Costume and Scenic Design Lisa Cody-Rapport adorned the stage with marbled purple lighting, which created a mystical glow around the Pollitt plantation home in the Mississippi Delta. A silhouette of the home behind the set pieces bore an eerie resemblance to a cage. Lighting was designed by Kevin Griffin, resident lighting director as well as the chair of the department.

The story of Cat on a Hot Tin Roof revolves around the corroding relationship of Brick Pollitt, played by Fisher Alexander (‘22), and Margaret (Maggie), played by Dassika Gilkey (’22), as they attend cotton tycoon Big Daddy’s (Eric Zivot) 65th birthday party. Zivot was also the dialect coach and fight choreographer for the show.

“It was interesting working alongside my professor as an actor in the same production, since we’d be interacting at a different level,” Gilkey said.

The irony and tension of the play mount when the audience discovers that Big Daddy is the only character who does not realize he has been diagnosed with cancer.

Although Brick is indifferent to the matter, Maggie is adamant that Brick’s neglected brother Gooper, played by Juan Cabrera (‘23), and his energetic wife Mae, played by Mariah Haskell (‘22), should not inherit the 28,000 acre estate upon Big Daddy’s death.

Gilkey’s Maggie is bold, feisty, and unfiltered. She is discontented with her childless marriage to an alcoholic whose mind wanders to his days as a professional football athlete with his best friend Skipper; the night before, he had broken his ankle jumping hurdles on a high school field.

“The most memorable thing about playing Maggie was the work we put into empowering her as a woman in the society Tennessee Williams built for this play,” Gilkey said. “She’s much stronger than people have portrayed her in the past, and I was happy exploring how I could break the many misogynistic attitudes ingrained in the text.”

The play is riddled with other characters alluding to the notion that Brick’s and Skipper’s friendship was a cloak for a romantic relationship. The real turning point of the play is when we discover that Skipper committed suicide after drunkenly proclaiming his love for Brick over the phone; Brick hung up on him.

Brick is aptly named: watching Maggie parade around the stage discussing Gooper and Mae’s little “no-neck monsters” in the first act was like watching her speak to a brick wall. One of the heights of Fisher’s performance was when he said, “Mendacity is a system that we live in. Liquor is one way out an’ death’s the other.” His character is cold and reclusive until Zivot’s booming voice as Big Daddy prods the truth out of him.

As for the “no-neck monsters,” the children owned the stage and provided lively comic relief when it was most needed. Sonny, Trixie, and Dixie, were played by Caedmon Griffith, Giovanna DiQuattro, and Eloïse Lewin. Whether it was jumping on the bed, rudely inserting themselves in serious conversations, or singing “Skidamarink” for Big Daddy whilst following Haskell’s cheesy and hilarious dancing, they were welcomed by the audience with cheer.

Cat on a Hot Tin Roof has a grand emotional arc, beautifully executed under the direction of DiQuattro. The production featured several unique touches, including the cast singing “You Are My Sunshine” backstage while watching the fireworks. The song was gorgeous and chilling, coming right after Big Daddy is informed of his diagnosis. Even the manners in which characters interacted with their props were nuanced: Brick’s crutch and Maggie’s glittering heels were symbolic and eye-catching throughout the performance.

DiQuattro also changed the time period of the play from the 1950s to the 1990s, to present a more racially integrated Mississippi.

“It was great working with DiQuattro,” Gilkey said. “I admired her care with approaching the text from a feminist perspective.”

In addition to illuminating questions of sexuality and race, Cat on a Hot Tin Roof is predicated on the tensions of shifting gender roles. Although his parents dote on him, Brick is criticized by them for failing to hold a job or become a father. Maggie is degraded for failing to have Brick’s child, for her promiscuity, and for her assertive nature. Big Mama, played by Kelsey Kline (‘22), is at the helm of this ship, commenting on her son’s shortcomings while she is in a relationship with a man who seems to despise her.

The gender relations between Big Mama and Big Daddy are perfectly summed up in this single statement delivered fervently by Zivot: “Your loud voice and your old busybody buttin’ in here, there, and everywhere. Sashayin’ around here, makin’ a big noise like a boss. I’m the only boss around here. I built this place with no help from you.”

The next show coming to the Annie Russell Theatre is the musical Next to Normal, starting April 15. These shows are making a splash on campus, reminding the community of some of the loaded messages that make live theatre irreplaceable.