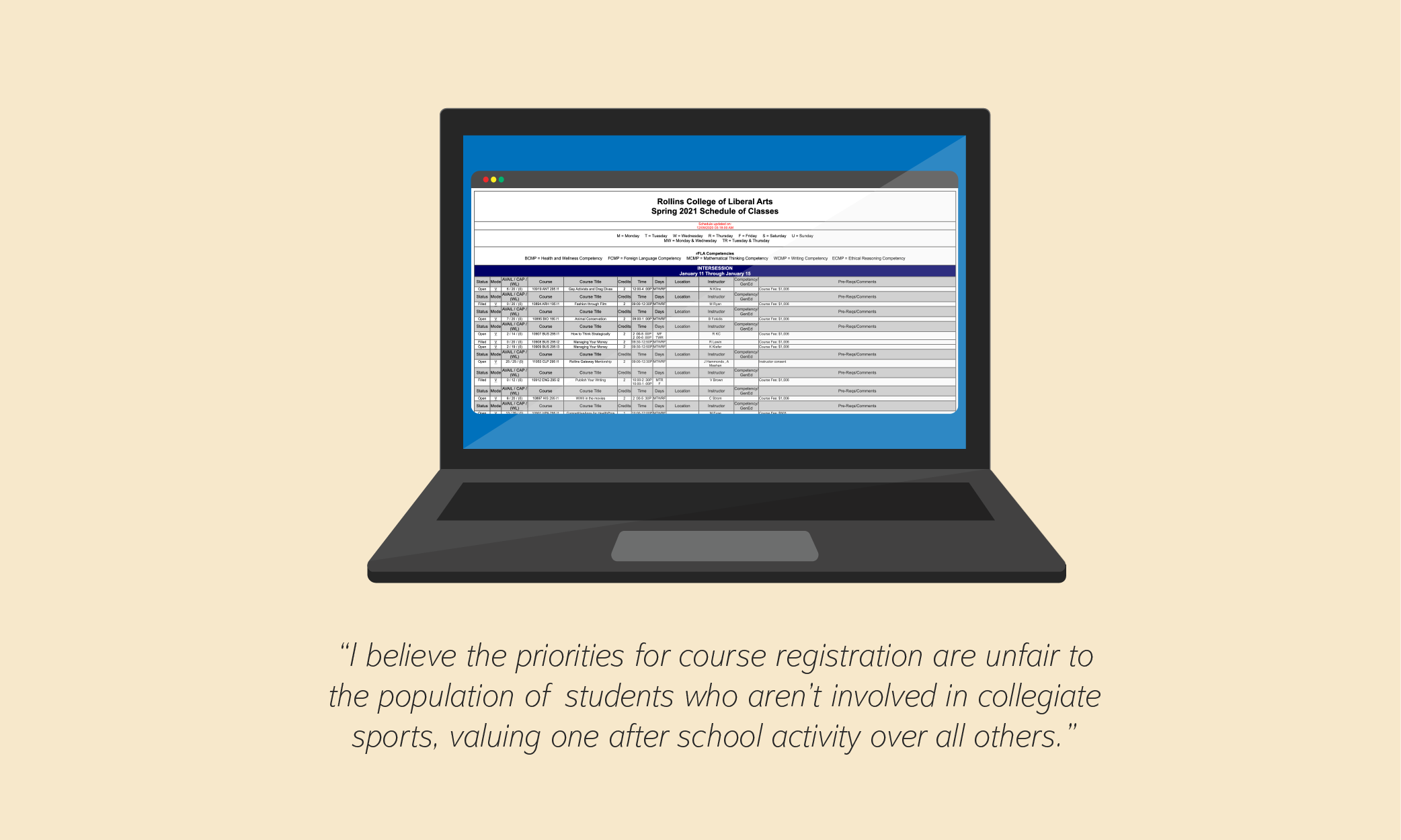 System should base seniority on credit hours, attendance

Rollins course registration season is an inevitable time of stress for all students, but some changes can be made to the system to make it fairer and relieve some of the pressure.

As a non-athlete freshman with a last name that starts with the letter K, I had the lucky opportunity to choose my courses a full nine days after registration opened, leaving me with (close to) last pick.

I’m attempting to graduate either early or with a double major in psychology and political science, which requires efficient course schedules that minimize the number of courses I need to take. But both of my majors, which already have limited course options, had even more limited room in compulsory courses by the time I could register.

I couldn’t make it into an introductory psychology class that I’m required to take before I can take any other psychology classes, which means that I will have to wait at least two full semesters before taking a higher level psychology course. Meanwhile, athletes in some of my other introduction level classes were allowed to register a full two days in advance, thus filling up underclassmen courses.

This is not meant to say that athletes don’t care about their coursework or grades because they definitely do if they’re attending Rollins. However, arguments used to support the athlete-first system are faulty.

The first argument I’ve heard is that athletes have to work around their sport. The course registration timeline itself enforces the idea that sports are a higher priority than classes. Many students are part of groups and teams that have to find time outside of their busy class schedules to meet and practice, such as groups in the art, theater, and music departments.

These students aren’t given the same opportunities and preferences for courses as athletes, even though they dedicate the same amount of time, if not more, into group-related activities.

The second argument I hear, and have heard since kindergarten, is that we need to find some way to repay our athletes, so this is how we do it. Again, I reiterate that others have dedicated time and effort to their extracurriculars. Why should sports be treated differently than any other extracurricular activity?

I can also respond to this argument by saying that certain students are given scholarships for their sport, which is a form of payment in itself. A study conducted by Carnegie Mellon shows that athletes even receive special treatment when applying to college.

None of this is to say that I dislike athletes and blame them for my issues. Instead, it is a structural issue in the course registration system. Many of my friends who are on athletic teams also see issues with the order of class registration and agree that the preferential treatment is unfair.

I propose a course registration system solely based on course attendance and credit hours (with exceptions). The credit hour priority values seniority. I believe it is a valid system to have in place, especially when seniors need a few select classes to make it to graduation.

Additionally, the ultimate goal of taking attendance into account in the registration process is that it will benefit those who care enough to show up to class and who want to be there the most.

Of course, if you have a medical problem or another rare exception, it should be taken into account in the registration process. If students have an emergency or need an excused absence, their attendance for those days shouldn’t penalize them. We’re still in a pandemic and don’t have a lot of knowledge on what everyone’s individually going through, so we should give them the benefit of the doubt.

In summary, I believe the priorities for course registration are unfair to the population of students who aren’t involved in collegiate sports, therefore valuing one after-school activity over all others. The credit hour priority is logical and should remain, perhaps with an added emphasis on class attendance.