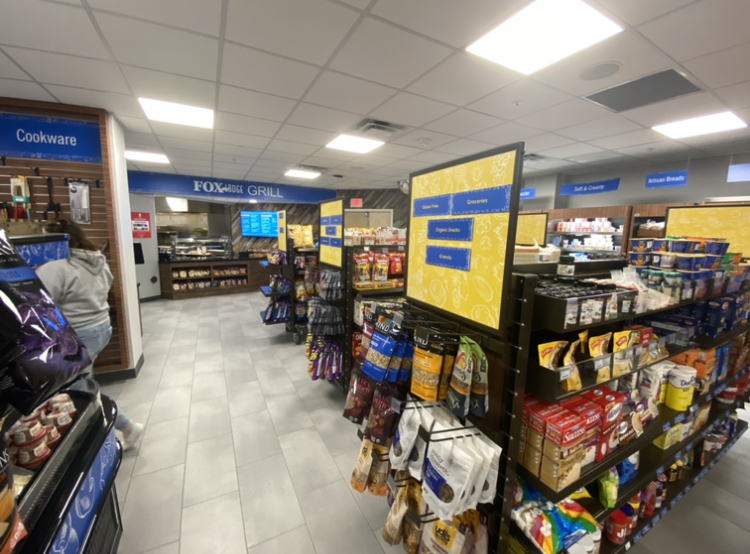 According to a small independent study conducted by The Sandspur, the average price for Fox Lodge products is higher than the same products at popular retail chains. The same conclusion was made by The Sandspur 10 years ago.

Products were selected randomly, on condition that they were also sold at at least two of the big-box stores.

“The costs of acquiring and delivering products at stores such as Walmart, Target, or Publix vs. the Fox Lodge C-Store are vastly different [due to their] massive buying power.” said Carolina Ossa, dining services marketing manager.

After the average prices of the available merchandise were calculated, the information was compiled and analyzed to conclude whether or not prices were more or less expensive in the competing stores.

To find the averages at all stores, the prices of five randomly selected goods from three categories were recorded as seen in the table below. The three categories are snacks, drinks, and other goods.

The data in the table above depicts the average prices in these retail locations. Therefore, the following can be determined:

The price of convenience

While C-store products are on average more expensive, one question remains: is it better to drive elsewhere to purchase goods?

Given that the current price for regular gas in Winter Park averages $3.15 and the average mileage per gallon is just over 25 MPG, each mile costs approximately $0.12. The nearest Walmart and Target are 3.6 and 4.6 miles away, respectively. As such, a single snack, drink, or utensil would have an additional $0.43 to $0.55 markup.  Although 7-eleven is a walking-distance alternative, the difference in price is still not significant.

According to Ossa, when stores receive deliveries, they receive large quantities of product, which increases savings in labor, stocking, and delivery costs. In addition, all revenue from Dining Services facilities across campus are exclusively self-sufficient and do not generate profit for the college.

Given that the C-store’s competitive pricing is similar to stores such as 7-Eleven, fluctuations in pricing are the most substantial limitation to this data analysis. Since larger-scale convenience stores have ongoing sales every month, it becomes difficult to compare the true retail prices at these locations.

Although the majority of the merchandise at the C-store is more expensive than the local big-box stores, it is important to keep in mind that the price difference is merely a matter of cents or a couple of dollars. And lastly, as it is not common to buy in-bulk at the C-store, it is more financially viable to go there for small purchases instead of the big-box stores.