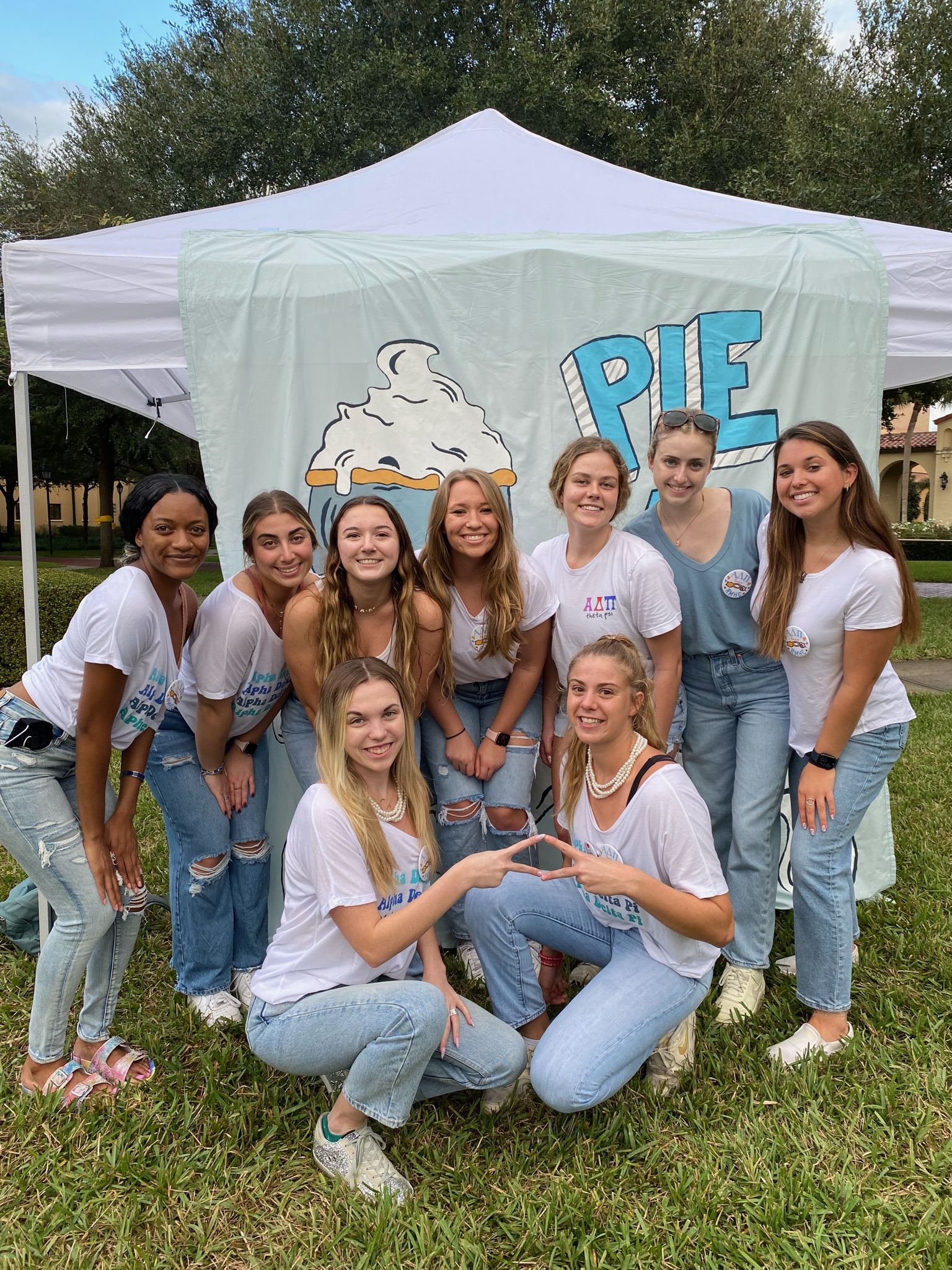 By Arabella Lilleslatten on September 23, 2022

For members of the Alpha Delta Pi sorority at Rollins College, philanthropy is not performative—it’s personal.

Each year, members of  the Rollins chapter of “ADPi” raise thousands of dollars at fundraising events like “Pie a Pi,” in addition to serving as In-House volunteers for the Ronald McDonald House Charities of Central Florida.

The Ronald McDonald House is a nonprofit organization that provides families of hospitalized children with housing and accommodations for no expense. There is a suggested donation of 20 dollars a night, but no family is ever cast out for an inability to pay.

As an institution, Rollins College promotes the motto “Life is for Service,” which is engraved on a wall by Strong Hall. Rollins alumni Fred Rogers ‘51, the creator and host of the program Mister Rogers’ Neighborhood, toted a photo of the famous plaque in his wallet as a constant inspiration in his life. As stated on the Rollins College website, “Throughout his life, Rogers placed huge importance on personal relationships. Throughout Rollins’ history, we’ve placed human connections at the center of our education.”

The Alpha Delta Pi sorority is a testament to Rollin’s zeal for service. Some members of the sorority are familiar with RMH through their dedication to volunteering, while others were first introduced through family, friends, and firsthand experience.

“When a room opened up at The Ronald McDonald House just across the street from the hospital, it made everything going on feel a little bit lighter,” said Brooke Lawson (‘23), a member of ADPi at Rollins.

At 11 years of age, chronic autoimmune issues forced Lawson and her mother to leave their home and seek specialized treatment at the Rhode Island Hospital. Staying at a hotel 40-minutes from the hospital further complicated an emotionally and financially taxing situation.

Across the street from the hospital, The Ronald McDonald House welcomed Lawson and her mother with open arms.

“I was at that hospital for probably 6 months,” added Lawson. “There were a couple of times where they admitted me and told me I needed to be in the hospital overnight, but besides that I was going home—yea— home to the Ronald McDonald House and staying with my mom, which was really nice.”

“Being warmly welcomed, our needs and emotions being continuously checked on by the abundantly compassionate staff, and being in the home with other families who ‘got it’ all made this emotional time more palatable,” said Lawson.

When Lawson viewed an ADPi video during recruitment week, she felt like she was “there for a reason.”

Melissa Mason (‘23) was also impacted by an ADPi recruitment video her freshman year, which shared the story of a member whose family had stayed in a Ronald McDonald House while her sister passed away during a battle with cancer. “Her sorority sisters were her rock while she was grieving her sister’s death,” expressed Mason.

Outside of fundraising, the sorority sisters participate in activities such as “Baking Buddies” and “Share a Meal,” which entails group brainstorming, shopping for ingredients, and then sharing a home-cooked meal with the families at the RMH.

“Putting a face to the people that we’re helping, and talking to them, gives authenticity, compassion, and meaning to what we’re doing,” said Mason.

Maia Russell (‘23), a Senior in ADPi, expressed sheer gratitude towards being able to experience touching interactions with families at RMH. “I think it’s really cool that we can go and physically help. When we have an event it is great to give that money, and it feels so rewarding, it’s just different being able to see the impact you have other than writing a check.”

Like Lawson and Mason, Russell’s familiarity with the generosity of the Ronald McDonald House extends beyond philanthropy.

Russell’s childhood best friend, Taylor, had aplastic anemia, a highly serious and rare condition occurring in roughly 2 out of every 1 million people. His family stayed in Ronald McDonald houses while he sought treatment and endured surgeries—his brother, who stayed in the house, gave him the bone marrow for one of his transplants. Russell fondly reflected, “They’re very thankful for that process. They are like a second family to me; it is kind of a full circle moment—being able to contribute and give back to something that has been so influential in the life of someone I love.”

Alpha Delta Pi was chartered on the Rollins campus in 2015, making it the most recent addition to Rollins sorority life, while the greater organization stands as the oldest collegiate secret society for women in the world. The sorority’s philanthropy is the RMHC on a National level.

For the Fall semester of 2022, the Rollins chapter has at least four group trips planned to the Ronald McDonald House.

According to the RMHC of Central Florida, “Before the Ronald McDonald Houses, parents were sleeping in their cars or in chairs in the waiting room, eating out of vending machines, or bearing the expense of impersonal hotel rooms.”

“Each year, about 2,700 families stay with us to be close to their critically ill children … The first Ronald McDonald House opened in Philadelphia in 1974. Today, the organization is worldwide with programs in 43 countries and regions– a global network of hope and healing,” says the RMHC official website.

Lawson, Mason, and Russell plan to be a part of this global network for the rest of their lives.

“Every time I have the opportunity to help prepare a meal for one of the homes or drop a soda can tab for their collections in the dish on my kitchen counter; it is a reminder of gratitude,” said Lawson. “I intend and hope to only become more involved with Ronald Mcdonald’s growth after graduating from Rollins and Alpha Delta Pi.”