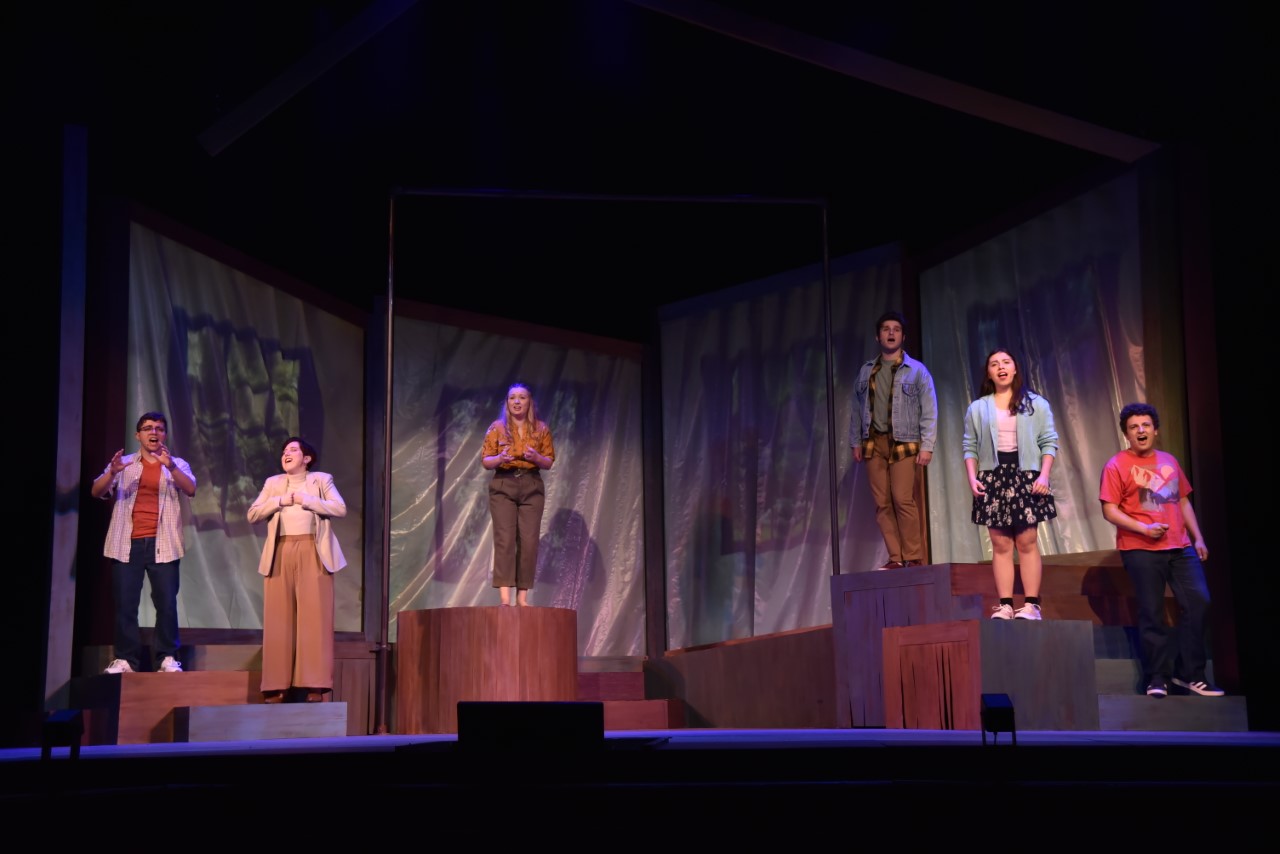 Review: ‘Next to Normal’ makes audience feel ‘virtually everything’

A haunting music-box melody tinkled within the walls of the Annie Russell Theatre on Thursday, with visions of purple and orbs of gold illuminating a draped backdrop. Sniffles rippled through the packed house, as the audience watched a manic-depressive woman dance a waltz with her son–only, her son was not actually there.

For the final mainstage production of the Annie Russel’s 89th season, six auspicious and committed Rollins students presented a heart-wrenching production of “Next to Normal,”  directed by Rollins Musical Theatre professor Missy Barnes and musically directed by Rebekah Piatt. ASL interpretations were provided by Kirsten Povolny and Kenneth Ramirez.

The Pulitzer Prize-winning American rock musical, with music by Tom Kitt and book and lyrics by Brian Yorkey, is primarily delivered through songs, including the haunting waltz “I Dreamed a Dance.” The song is sung by Diana Goodman (Kelsey Kline ‘22) during a hallucination of her son Gabe (Nicholas Matthews ‘23), who has been dead for 16 years.

“Next to Normal” revolves around the struggles of Diana, a suburban woman who grapples with bipolar disorder and schizophrenia: the opening scene closed with Kline frantically assembling sandwich bread on the kitchen floor.

At the same time, the show provides insight into each member of the Goodman family. Dan (Michael McNamara ‘23), contemplates the stifling presence of a lost son and his inability to help his ailing wife in the song “He’s Not Here;” Natalie (Paula Espinosa ‘25) fills her boyfriend Henry (Colin Flaumenhaft ‘22) in on her family’s neglect in “Superboy and the Invisible Girl;” and even Gabe sings of being his mother’s “worst fear” and “darkest nightmare” in “I’m Alive.” In fact, the audience does not know that Gabe is a hallucination until Diana horrifies her family by making Gabe a birthday cake.

The show also challenges modern psychotherapy. Diana lists the extensive side effects of her drugs in “My Psychotherapist and I.” When asked by her doctor how she feels, Diana says, “I don’t feel anything.” Dr. Fine (Analise Cutter ‘22) replies to this by proclaiming, “Patient stable.”

Cutter reappears in a lighter moment as Dr. Madden, where she morphs between the flirty rockstar therapist of Diana’s hallucinations and a genuinely concerned professional.

The actors’ performances were filled with visceral vocals and authentic outbursts of emotion. Somber moments were countered by hints of comedy, such as when members of the cast danced around the stage, making funny faces while performing choreography with cut-outs of colorful pill shapes—a reference to Diana’s complex collection of medications. The arrangement of brightly-painted platforms of differing heights and sizes created an intriguing silhouette of the cast members, in addition to the eye-catching projections (Lauren Cushman) of blurred picture frames, flower petals, and glimmering orbs behind the actors.

Portraying the emotional arc of a musical that discusses the side-effects of ECT and psychotropic drugs is no easy feat. Kline, Matthews, McNamara, Espinosa, Flaumenhaft, and Cutter did so with gusto and dexterity. The actors dynamically sing through a two and a half hour musical score that requires them to be both advanced musicians and astounding singers; they did so with profound sincerity and humanity.

Indeed, the difficult musical arrangements have been likened to that of Stephen Sondheim; however, the live orchestra didn’t miss a beat. Although they performed from the pit, the singers and musicians were entirely connected in their musical expressions.

“Next to Normal” is not a feel-good musical, and it isn’t meant to be either. You exit the theatre having felt virtually everything.

Director Missy Barnes states in the program, “In 2022, around 20 percent of the world’s population experiences some form of mental illness. Globally, 48 million people currently experience bipolar disorder (the diagnosed mental illness experienced by Diana in ‘Next to Normal’) […] While the subject matter of this musical is challenging, ‘Next to Normal’ also reminds us that we can always find connection and love, as well as hope for a brighter future.”

As “I Dreamed a Dance” comes to a haunting close, Gabe convinces Diana to finally join him by attempting suicide. After landing in a hospital in Act II, she undergoes electroconvulsive therapy (ECT), faces memory loss, and confronts a profound disconnect with her living family members: McNamara sings “mine is just a slower suicide” as he emotionally collapses in “I’ve Been;” Espinosa steals her mothers drugs and unleashes the feelings of a pent-up prodigy by dancing at a nightclub; Cutter and Matthews look on in their pale, chillingly sterile costumes. Even as the people in Diana’s life become collateral damage to her own suffering, her daughter Natalie eventually finds the strength to love her mother in spite of her shortcomings:

That’s way too far away

But something next to normal

“Next to Normal” Credits