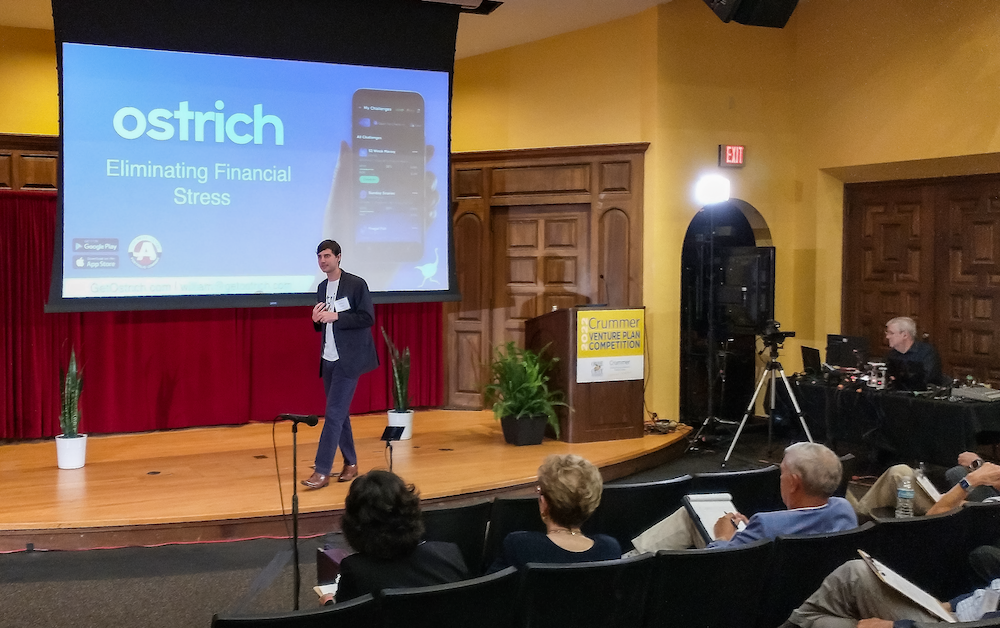 Glass and Holliday first met during the Rollins’ Men’s Soccer pre-season in August 2010 and have been close friends since. Glass had the idea for Ostrich in 2017, and together they pursued the startup at the beginning of the pandemic.

“We were a little bit in shock when [we heard we won],” Glass said. “The competition is an incredible point of validation that we’re not crazy for having this idea and wanting to build this thing […] that solves a big problem no one has been able to solve.”

“The idea for the app came from my own experiences,” Glass said. “My parents got divorced because of money. They didn’t have a way to communicate or have common goals. […] Money and finances have all these consequences, and it felt like there were a ton of tools and resources out there, but no one’s actually helping people take small actions.”

The Crummer Venture Plan Competition is open to all startups headquartered in Orlando. This year, out of 48 written proposals, 16 were selected to move on to the semifinals, in which the leaders of startups pitched their ideas to a panel of successful entrepreneurs and investors.

The top three startups were selected to compete in the final round. Kinnect, which took second place and won $25,000, helps families consolidate their estate information in a single location. Connecthedocks, a dock and boat rental company, took third place and won $10,000.

“[Competing in the Crummer Venture Plan competition] was intimidating to some degree,” Glass said. “There were some companies that were definitely further along than we were. […] All I could do was put our best foot forward and share what we’re building and our vision and hope that that’s enough to resonate.”

Glass and Holliday presented an earlier version of Ostrich during the 2021 virtual competition, where they advanced to the semifinals. At that time, Ostrich was a prototype built by Glass, and its target users were still being fine-tuned.

Going into this year’s competition, Ostrich had received a small investment from AARP’s accelerator program and was professionally built by an engineering team.

“That was the big turning point for us. We really have traction, and we could actually point to that traction, which we didn’t have before, when it was more of an idea,” Glass said.

This year’s grand prize, funded primarily by donors and an Orange County grant, doubled from $25,000 to $50,000 due to last year’s competition being virtual. Glass said that much of Ostrich’s winnings will be used to hire a full-time technical team.

“They came back, they fixed a lot, they made the right pivots, they had tons of perseverance,” said Kyle White, assistant director of Advanced Entrepreneurship in the Crummer School of Business. “Their story shows that if you work really hard and leverage your network, you can be successful.”

Glass was an international business major involved in many facets on campus, including being a work-study student in what is now the Center for Leadership & Community Engagement (CLCE), an immersion leader, a peer mentor, president of X-Club, and president of the Student Support Foundation.

Glass credits his entrepreneurial ability to the interdisciplinary nature of his major.

“I think being able to bring all of those disparate topics into one is essentially what you’re doing in a pitch; you’re taking something really complex with your business […] and distill it into something that you can communicate clearly in a short amount of time,” Glass said.

Glass shared that his first pitching experience was actually at Rollins, pitching to donors to establish the college’s first Student Support Foundation in 2012. He hopes to continue giving back to students; Ostrich will partner with the Wellness Center during April’s Financial Wellness Day to launch the app’s pilot on campus. Glass plans to use some of the $50,000 winnings to give cash prizes to students who engage with the app.

Glass said he is appreciative of all the support he’s received from Rollins alumni and current and past staff, including Dean of Gateway and Lord Family Assistant Vice President of Student Affairs Micki Meyer, Director of CLCE Meredith Hein, Associate Director of Residential Life & Explorations Aspen Fox, and Professor of Business Dr. Raghabendra KC.

“It’s powerful and motivating,” Glass said. “It feels like we’re really building a community around our company and what we’re trying to accomplish.”

Glass said there are many ways for student entrepreneurs to get started, including actively reaching out to startups. Similarly, White said that, despite being a graduate school, the Crummer program is “open for everyone. There’s tons of resources, databases, networking opportunities, CEO (Crummer Entrepreneur Organization) open to students.”

Glass said that he is happy to meet with any students who want to learn more about establishing a startup company.

“If anyone is interested in entrepreneurship, it’s something I wish I would have dabbled in while I was at Rollins,” Glass said. “As a student, you may not know where to start, but I would encourage anyone to not let that hold them back. […] Start taking steps. Experiment. Try things. Go learn.”