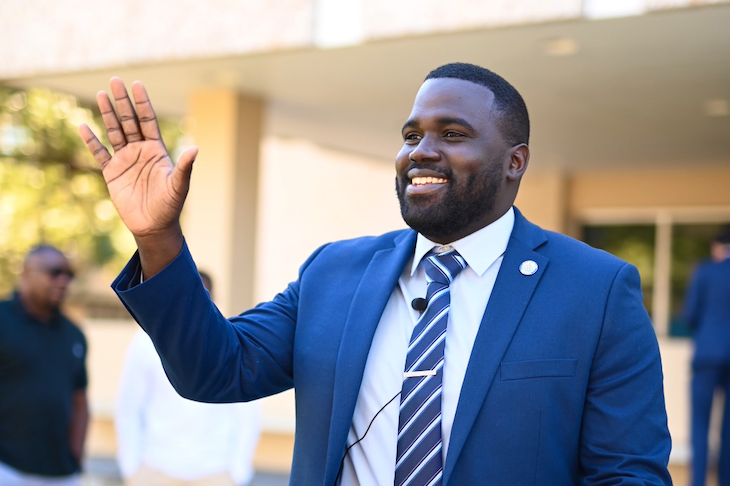 The following article is a profile on Elijah Noel, candidate for Winter Park commissioner Seat Four. A profile on a candidate does not indicate The Sandspur’s or Rollins College’s endorsement.

Born in Orlando, Noel graduated from The Geneva School in Winter Park before attending Rollins between 2015 and 2020. He graduated with a bachelor’s degree in international business.

“[In my major], I had to do a lot of presenting and research, and that’s not too dissimilar from running for office here,” said Noel. “Articulation is something Rollins tremendously helped me with.”

When he was a Rollins student, Noel was a member of the basketball team and a work-study student in the Center for Career and Life Planning (CCLP).

“Elijah knows the needs of our school,” Elliott said. “He understands there is a very important three-way partnership in our community between the residents, the local businesses, and Rollins College itself.”

In terms of political experience, Noel interned at the Winter Park Mayor’s Office from 2019 to 2020, planning events and aiding the campaign of Mayor Steve Leary. In addition, Noel participated in US Representative Stephanie Murphy‘s and Florida Representative Anna Eskemani’s youth advisory boards. Noel has not had campaign experience prior to his current candidacy.

“[Campaigning] has been challenging but rewarding,” Noel said. “Pitching yourself […] can be overwhelming sometimes. But for the most part, I enjoy candidacy. I’m fighting for a cause that’s bigger than myself, and I draw strength from that.”

Noel is not alone in being a young political candidate from Rollins. Omar Sadek (‘23), political science major and Spanish minor, ran for Lake Mary city commissioner in 2020. His campaign team was exclusively staffed by Rollins students.

“There’s a lot of behind-the-scenes work that goes into running a grassroots campaign, especially one for city office,” Sadek said. “To start, you have to make sure you’re not only deeply embedded in the community, but that you also have the resources to kickstart the campaign.”

His pillar of connectivity refers to establishing bike paths and walkways that physically link parks and recreation centers to one another, to town hall, and to the west side.

The average age of residents in Winter Park is 45 years old, and 22 percent of Winter Park’s population is over 65 years old.

“Involving the youth and opening that door of engagement is critical to building a better community. The youth are our leaders of tomorrow,” Noel said. He added that he would like to appoint younger officials to city commission boards to “give them a start in the world of politics and the world of community engagement, similar to the way I got my start here through our career and mentorship program at CCLP.”

Additionally, Noel’s goal to support local business includes bringing a Mexican-fusion restaurant, called ORO, to Park Avenue. He will serve as its managing partner when it opens later this year.

According to Noel, the City of Winter Park lost 110 businesses due to COVID-19. It also lost 15 percent of total employment in 2020. Noel said he plans to attract more businesses by simplifying the bureaucratic red tape that prevents new businesses from moving to Winter Park.

“It shouldn’t be so challenging for new businesses to get to Winter Park,” Noel said. “It’s not conducive to our residents or our community.”

When asked about how he would advise students to get involved with their community, Noel emphasized the importance of giving, “whether it’s volunteering at the rec center here in Winter Park or  handing food out to the homeless or giving out blankets.”

Noel said that he is grateful for several of his Rollins mentors, which include his adviser and Business Department Chair Dr. Timothy Pett, Director of Financial Aid Steve Booker, his basketball team, and several employees of CCLP.

Rollins students can find Noel at his restaurant on Park Avenue or at Martin Luther King, Jr. Park, shooting hoops at the basketball court. He encourages students to vote in the upcoming election, which will occur in person on March 8.

“I feel passionately about my community, and I would like to see change enacted,” Noel said. “A win for me would be a win for us all.” Winter Park residents can find their local polling location here.