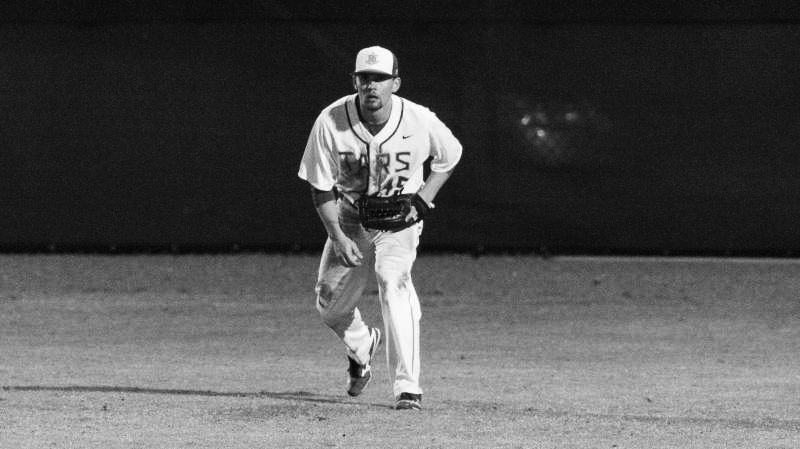 Rollins baseball team bounces back from a tough weekend tournament The Florida Tech Panthers made the trek from Melbourne on what began as a chilly weekend. Thankfully, it soon turned into the perfect weekend for baseball. The number 25 Panthers (2-1, 2-1) entered the series with the Tars riding a long winning streak against the Rollins baseball team, who entered the season looking to right the ship.
The first of the three-game series featured a mix of veteran and rookies pitching for the Tars. Isaiah Sakany ‘16 earned the start against the Panthers and was pitching to an active group of hitters from FIT early.
Game 1
The pitcher had a scary moment in the third inning when catcher Chris Corbett ‘17 was trying to throw to second to prevent a stolen base. Unfortunately, Sakany was unable to get out of the way in time and was hit up high with the throw from Corbett. The tough right-hander from Brooklyn, NY was checked out by the training staff and was cleared to return to duty. Freshman Brad Case was brought in to pitch in the sixth inning and provided an instant boost for the Tars and ended the game with six K’s in a valiant effort to bring the Tars back into the game. It was not enough, as the Panthers offense took over and the Rollins bats remained quiet. The game ended on a 6-4-3 double play by the Panthers for a 6-1 FIT win.
Game 2
Saturday featured a doubleheader with beautiful baseball weather. The weather seemed to have reinvigorated the Tars as they came out swinging for the fences early. Peter Nicoletto ‘17 got an already-excited Rollins crowd on their feet for the Tars’ first home run of the season. The game looked to be in hand as the Tars took a 3-1 lead into the ninth and the Panthers offense struggled to put points on the board. Despite this, the Panthers found a way and scored three quick runs to take a 4-3 lead into the bottom of the ninth that would eventually turn into their second win in weekend series.
Game 3
Game 3 featured a frustrated Rollins team itching for a win. The teams battled back and forth with the Tars getting more great play from Nicoletto and Tyler Fairbanks ‘18 going yard for his first homer of the season. The Panthers looked like they were in position to steal another one at Alfond Stadium but the defense clamped down, giving up only one more run to earn their first win of the season.
The Tars look to build on their momentum with a series against Young Harris next weekend back at Harper-Shepard Field. If the Tars can get some consistency, they will be a force to be reckoned with in the Sunshine State Conference.