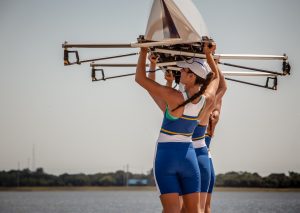 On April 8 and 9, the Rollins crew team participated in the Knecht Cup, a prestigious regatta hosted by Princeton in West Windsor, New Jersey. It is “one of the largest collegiate regattas in the United States” with “70 different universities and colleges from throughout the country” competing, according to the Princeton National Rowing Association. Not only did Rollins participate, but they certainly made themselves known. Both the men and women’s teams surfaced on the leaderboard in a handful of events.

The men’s team took home gold in two events. Marc Bremmer ‘17 and Mitchell Laughlin ‘20 secured the 1st place position in the Men’s Varsity Pair event. They raced in conditions perhaps colder than what they were used to, at 42 degrees Fahrenheit, yet they still won by open water (meaning that they were more than a boat’s length ahead of their competition). Bremmer ‘17 commented on the events of his race. “Our start was strong, allowing us and one other team to pull away from the rest of the pack. The other team kept contact with us until the 1000m mark [halfway through the race] where we began to open up a gap. Heading into the final 500m, and the sprint of the race, we kept focusing on making the gap as big as possible between us and the rest of the competition. We knew we would be unchallenged for first place, but we wanted to post as fast a time as we could.” He added that he and Laughlin ‘20 work well as a pair and that they were proud of their race, which they agreed was clean due to their calm and relaxed attitudes.

The Men’s Varsity Four team also came in 1st amongst Division II and III teams. They beat out schools such as Carnegie Mellon and Bowdoin College. Sarah Ankli ‘18, Cameron Boyd ‘20, Nilsen Arias ‘18, Mitchell Laughlin ‘20, and Marc Bremmer ‘17 made up the team.

Bremmer ‘17 praised their coxswain, Ankli ‘18, for her insightful decisions. “Our start was a bit slow and we were down, playing catch-up for the first 500m of the race. Throughout the next 500m we had teams on either side of us that we were tied with. Sarah responded to the situation well, calling for us to make moves and slowly push away from the competition inch by inch leading the pack into the 1000m mark.”

He adds that later in the race her position became even more vital. “Sarah then called for an increase in our stroke rating and made split-second adjustments to the race plan we prepared, not only keeping us in first but increasing our lead.” The team was proud of their win, but are eager to practice more and work on their rhythm and speed.

The women’s team advanced all the way to the finals in two of their events, securing 4th in the Women’s Frosh/Novice Four event, and 7th in the Women’s Club Eight event, which included Division I and II schools. Their competition in this event included Florida Tech and the University of Pittsburgh.

Overall, the team succeeded this weekend, and they were sure not to be discouraged by the harsh weather, despite its success in postponing most of Saturday’s scheduled events until Sunday due to high winds and cold weather.

This successful weekend is riding on the coattails of yet another major success. The prior weekend, both Men and Women’s teams received medals at their Championships during the Florida Intercollegiate Rowing Association (FIRA) Championships. The Crew team certainly has a winning standard and is and exciting team to keep up with. They are bringing some extra attention and pride to the Rollins name.

They will continue their season this weekend in Oak Ridge, Tennessee while competing at the Southern Intercollegiate Rowing Association (SIRA) Championship. The Men’s team will only be competing in the Men’s Varsity Four event, despite their success in the paired event due to the regatta rules only allowing athletes to be entered in one event.