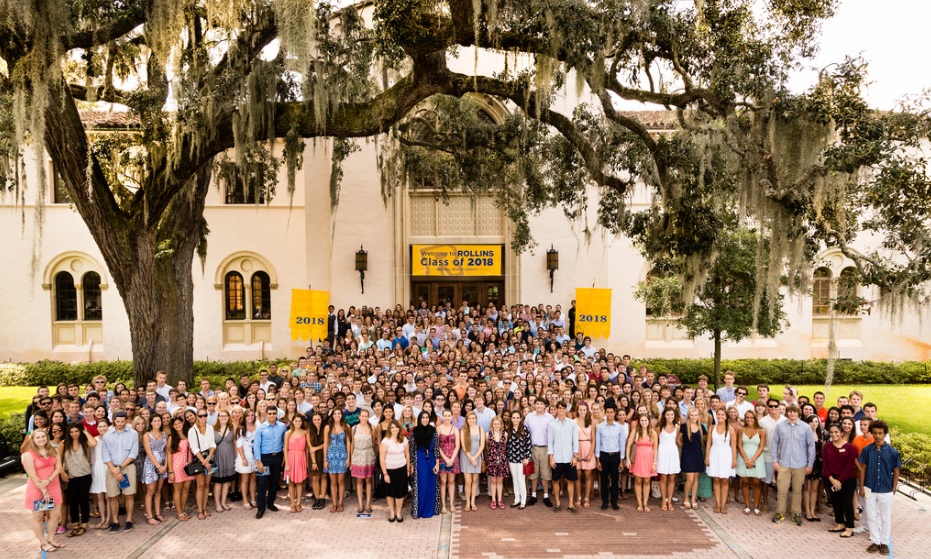 This year’s incoming class is the second largest in Rollins’ history, which demanded several accommodations. 543 first year students, along with 70 transfer students, began to call Rollins home this fall. These two additions make the overall student body the largest in the college’s history.

The two previous largest incoming classes came in fall 2013 which brought 480 new freshmen, and the previous year that brought 520 people. Fall of 2011 was the largest incoming class that Rollins has ever had—that year saw 555 students enter the college. “People ask me: is there a cap? And I’m like, you know what, I don’t know how much bigger you’d want to get,” said Acting President Craig McAllaster.

Despite budget issues, the Admissions Office did not make a major push to admit more students than last fall. In fact, admissions was expecting a smaller class, closer to 500 students. This was based on the low numbers in fall 2013.

Part of the reason for the large increase in student body is the new Business and Entrepreneurship program. ​”Having a traditional business management program, I think, is one thing that helped drive the numbers,” said Steve Booker, Interim Dean of Admissions and Enrollment. ​This was the first year that admissions could advertise the new major. In the past, a lack of options in business majors was a relatively common reason among students who choose another college over Rollins.

Last year 100 students began their college careers as International Business majors. This year, 150 first years came in with declared majors in the business department, making the total 50 people larger than before.

The faculty and staff were concerned about providing for more students than anticipated. ​”This summer when it began to become apparent that we weren’t going to melt like previous years, that brought in the deans and housing and student affairs. I said alright: Are we up to the challenge? You know, what are we going to do to make sure we don’t leave anyone saying, ‘Where’s my room?’ Or, ‘I can’t get a class?’ So, I think we’ve done a good job getting ready for this,” said McAllaster.

​The Rollins College Conference course, or RCC, program had to be expanded to accommodate the larger incoming class. Normal class sizes and scheduling is expected to be relatively unaffected by the increase in the student body .

Housing in the first year dorms is packed. Traditionally, Ward and Mckean were the housing buildings for freshmen. This year, the freshmen are housed in Strong Hall 220 and 221, and a few first years are in Elizabeth, which has always been an upperclassman dorm, in addition to Ward and Mckean. Residential Life also had to convert one of the study rooms in Ward into a double bedroom. Every freshman that wanted a bed on campus was able to get one. Most of the first years that were placed in an upperclassmen dorm are being given the option to move, as people leave the college or make late cancellations. “We’re pretty tight in first year halls. One of the things that means is that there’s not as much room for people to move around as they would like,” said Leon Haynes, Director of Residential Life. This could pose a problem, especially if a large amount of first years want to switch roommates or residence halls.

Luckily, more freshmen than usual are living off campus. Over 70 first year students decided to live at home this year, which is much higher than it has been in the past. Despite this, freshman housing is still almost at capacity.​

Right now, it is unclear if Rollins can expect larger class sizes every year due to the impact of the business degree and more international students. It is possible that this year was just an anomaly. Though Rollins has had to made accommodations for an unusually large class, other small liberal arts schools have struggled with enrollment this semester. “A lot of schools this year like us are not having record years. A lot of liberal arts schools are just trying to be where they were last year, and many of them are not even hitting that number. So we are very fortunate,” said McAllaster.